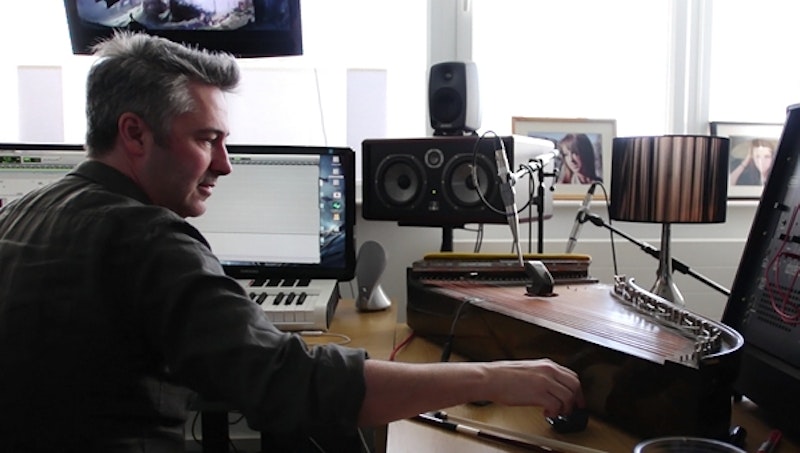 Time and lightness of being have a strange relationship; the presence of the latter causes the former to seem especially effervescent. "Discovering the Universe" is a case in point: it's nine minutes long, but flies by in a blink. Given that the version of the song linked above accompanies space scenes in an American Museum of Natural History exhibit, this is likely by design, but the effect is nonetheless striking. Gorgeous xylophone runs stream and curious pianos trickle through soaring string-section updrafts or questing synthesizer breakdowns, with the occasional denatured beat splatter to provide a loose sense of time-keeping. So while there is a definite degree of moment and of momentum at work in this piece, the drama inherent is never oversold or overloaded. I haven't seen the exhibit in question, but I imagine that it's visually arresting and involving enough—comets sweeping by, constellations yawning all around, the cold, unforgiving vastness of the cosmos—that "Universe" does the work that all scores are meant to do, heightening the experience without drawing much attention to itself. But I'd recommend it, also, as a light tonic for anyone wandering the streets as the sunsets and Christmas light displays erupt merrily all around.

Elizabeth Veldon has spent much of the past year sidling away from harsh noise tactics, and the results have been splendidly inviting without melting into wallpaper mush. "Tame Horses on Tumbledown" has been my go-to workaday jam of late, for those times when rock shouting or NPR chatter or dead silence fit neither my mood or needs, when what's called for is more of a sloshing nudge, a kneading of the gray matter. A sort of perpetual-motion drone is at work here, tilting this way and that and back again, and back again, over and over, but not in a manner that's pronounced enough to become irritating; think of a gently stimulated see-saw, or swing, or the motion within a tub of water in a science lab during an especially languorous earthquake. Every tone is on the verge of fading out, and in that respect I'm reminded a bit of William Basinski's The Disintegration Loops. Do the peaks dissipate as the end of this 55-minute long waking dream approaches? The critic in me insists that, yes, they do; the music lover in me counters that any minute alterations in tempo or structure are entirely beside the point. I'm uncertain who's right.

The brass lunges and bumps, the drum kit snaps, the flutes wag their tongues at you; the DJ scratches graffiti-tag the production at odd if justifiable intervals. Even minus Chuck D. and Flavor Flav's microphone tag-teaming about the title subject from Most of My Heroes Still Don't Appear On No Postage Stamp—playfully didactic yet effective, indicting, a chorus syllable party that never fails to remind me of a game of Pac Man—the vocal-free version of "Fassfood" (courtesy of producer R.A.S., who deserves a high-five or six) from this year's Heroes Vs Evil feels like the theme song to an Austin Powers sitcom in the flyest possible way, a frilly, florid throwback so irresistible that nobodies everywhere should be spitting hot 16s over it from yesterday until forever.

This won't happen, of course, because conscious rap is barely fashionable, and conscious rap from dudes who inspired the dudes who inspired today's teen and twentysomething rappers is, like, negative unfashionable. Which is a shame, because the discourse about how Jay Z is the blazing path for the graying B-Boy sidesteps any narrative wherein decades of fighting the power without a pause irrespective of what that might mean in terms of sales or swag remains, nonetheless, a noble calling in and of itself. Public Enemy keep rolling, and they keep being awesome, even if only you, me, Robert Christgau and 15 other people are still paying any attention.