Bret and Kanye, Sittin' in a Tree

On the first two installments of the Bret Easton Ellis podcast. 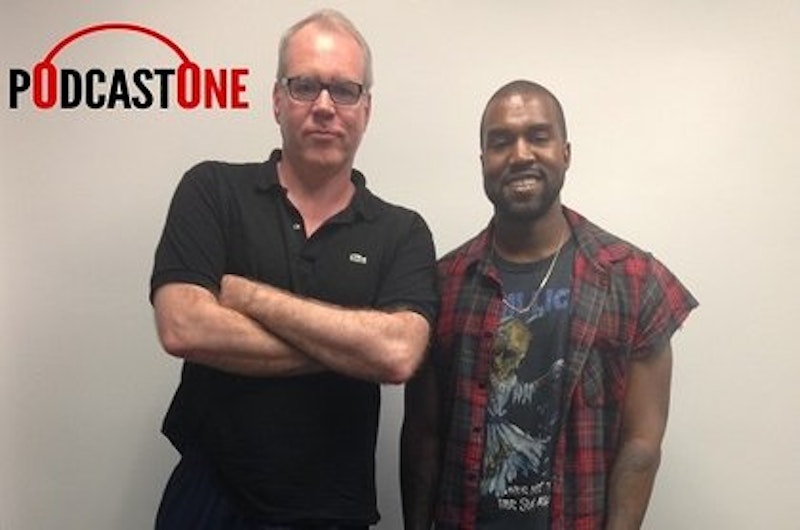 Bret Easton Ellis' voice, in conversation, is a deep, slightly uncommitted instrument. When discussing something that's of obvious import to him, he comes across as somewhat bored and removed, vaguely half-awake, syrupy, dripping with aged privilege even as he takes pains to not emphasize that privilege. That maddening tendency of so many young people—and so many people, generally—to imbue tonal question marks in statements is how Ellis talks about things, and he has a frustrating, cannibalistic/discursive habit of second-guessing the questions he is preparing to pose. When amused, he muffles his mirth so laughter emerges as a sort of smothered snort that runs the risk of the appearance of condescendence. All in all, he sounds a bit like Philip Seymour Hoffman's character in Along Came Polly.

Kanye West, on the other hand, has a more disjointed speaking style that suggests that he's piecing together opinions on the fly, picking words and phrases from a mental dictionary and assembling them as he goes. There are many sharp intakes of breath, unsettling displays of inflection, crippling stumbles of enunciation, digressions, momentum fades, groan-inducing jokes; you get the sense, while listening to West explaining his perspectives on various subjects, that he's fighting to push ideas as forcefully and intensely as possible because for whatever reason he may not be alive to express them five minutes from now. The effect: it's analogous to a high-functioning, brainy, autistic 15-year-old babbling at you about things you may or may not have much interest or real understanding of. When he goes on for five or seven or 10 minutes at a stretch, there is a real temptation to tune the guy out altogether. His normal voice is to his rapping voice what Terrence Howard's normal voice is to his acting voice: it's startling, endlessly. Working with West at DONDA on a day-to-day basis must be a simultaneously thrilling and draining experience.

In short, Ellis has an arguably passable radio DJ voice, while Kanye should really be limited to rapping, singing, and Tweeting. The inaugural installments of the Bret Easton Ellis podcast, broadcast during the last two weeks of November, placed West, Ellis, and various assistants together in front of a microphone to palaver and pontificate about cinema, culture, music, and so on. It's kind of a train wreck, but it's also kind of fantastic to hear these demonized public figures babble their way up and down the stairs of a pseudo ivory tower in two 30-minute chunks. On the first listen, a pattern is established: Ellis asks a question, West answers semi-directly or steers the discussion in a different direction indicative of his own megalomania, Ellis asks another question or throws a slab of red meat into the circle, then West's assistant pushes the group into an ancillary sub-discussion, Ellis steers in another direction, and then West in response circles back to address a question from much earlier in the interview while answering West's new question.

By my second and third listens, I felt more comfortable with the nature of the back and forth—it wasn't a formal interview, but a relaxed conversation by design: nobody was being clowned or interrogated, and the congeniality on offer downplayed or muted the reality that Ellis' references to avant garde films and New York Times critics went right over the head of West, an avowed non-reader who declared himself only the "authority of my emotions," and West's drumbeating of the African-American experience regarding Twelve Years A Slave as opposed to Ellis' more removed take on the film. Awkward, sure, but revealing and fruitful in an odd way. Ellis and West are working together on some mystery film project, but these two should really keep podcasting together.

3:00: While setting up his first question, Ellis unknowingly parrots talking points from the first Canyons trailer.

4:30: West has watched Menace to Society more than any other movie ever. I still haven't seen this. Once, in high school, I referred to it as Menace to Authority, which earned me some ribbing.

9:10: West fives props to Twelve Years A Slave, giggling unnervingly like Carlton from The Fresh Prince of Bel Air, the lauds director Steve McQueen "a proper fine artist"—which is very Londonshire of him—then draws a connection with his own "Flashing Lights" video and the Runaway film, which remains as ridiculous today as it was when it was first released in 2010. Then he compares himself to Steve Jobs and goes into a conceptual free-fall that makes sense but still comes across as insane.

14:45: Ellis on Slave: "[A]lmost as if it was made by a very exacting professor of Black Studies."

18:00: West draws a comparison between Slave's narrative to his mistreatment at the hands of an uber-exclusionary, international fashion cabal.

24:00: Ellis discusses how when movies were the provence of theaters, the movies "controlled you," but by contrast, home DVD viewing and video on-demand puts that control into the viewer's hands, with the result being that movies feel "less powerful, to a degree."

27:12: West's assistant asserts that Big Trouble, Little China was "a terrible film in terms of pacing and storytelling," though he loved it as a child.

30:11: West muses that Don Cheadle playing the lead in Slave might have made it more popular.

3:00: Ellis psychoanalyzes the place Yeezus came from and nails it, according to West.

5:10: Ellis says, "I don't know" after a declarative statement of his own for probably the 50th time in this exchange.

10:30: "I'm like a wolf, I'm turnt," West says, explaining the downside of relentless creativity that makes it difficult to sleep, and adds that he's tried to use religion, alcohol, meditation, pornography, and anxiety pills as a "dimmer switch" of sorts. There's a lot of laughter, all around.

12:20: The terms "product" and "content" are thrown around almost arbitrarily everywhere in this discussion in ways that are annoying, though it's endearing to hear Ellis call West "Ye" as though they're tight bros from way back. I kind of wish Mike Meyers had appeared in Dieter drag during the extended discussion of futurism and maybe scotched Jetsons movie West is supposed to be attached to.

16:00 West: the Yeezus cover is an "open casket" for the compact disc.

28:33: West's assistant asserts that he subscribes to the "Westian school of thought."

20:50: West's favorite Rolling Stones song is "Sympathy for the Devil," but he flubs the melody and lyrics and thinks the lyrics suck.

32:05: "I'm not the authority of anything except my feelings, my emotions, that's the only thing I could be the authority of," West declares, before walking the statement back several minutes later, declaring himself a lyrical authority.

—Raymond Cummings blogs infrequently at Voguing to Danzig and is the author of Crucial Sprawl, Assembling the Lord, and Class Notes.