The closest the Millennials have to The Beatles. 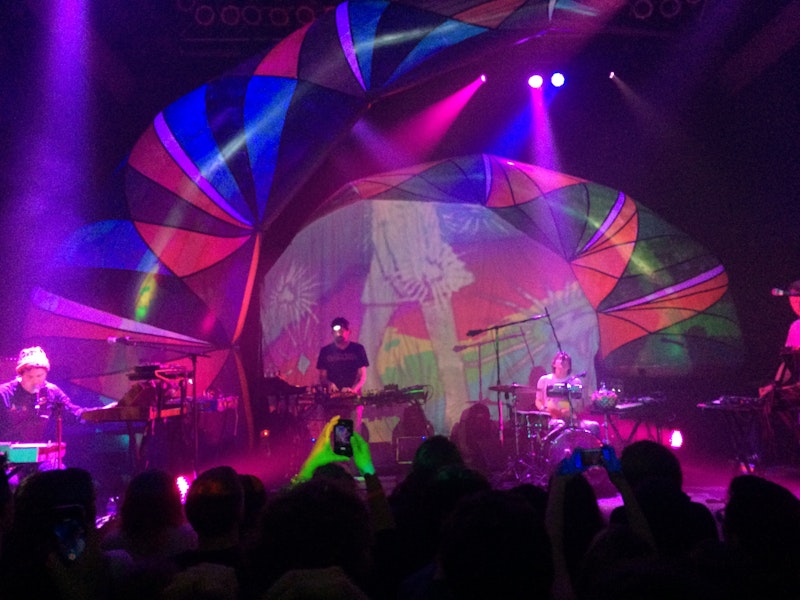 After a year of sudden cancellations and bad luck, Animal Collective, the closest my generation has to the Beatles, swallowed the 9:30 Club on Dec. 1 like yesterday’s breakfast in their toothy multi-colored maw. The band’s in the midst of making up postponed gigs from earlier this year, and at this point, they’ve been playing the same set more or less for nearly three years—selections from Centipede Hz with four or five old songs re-worked to fit in with the schizophrenic, barbed-wire chaos of that record, already more than a year old itself. For a prolific band that used to play two albums ahead—Merriweather Post Pavilion debuted live four months before Strawberry Jam came out in 2007—the lack of new material might be disappointing to some people, who you can always hear complaining at an AC show that they didn’t play so and so, that the new record is too x and not y enough like z. The fact is these guys have made 10 proper records and double the haul of EP’s, singles, and have always been eager to treat the fans with stuff like the early live bootleg/demo compilation Animal Crack Box. It’s ridiculous to dismiss the AC because Centipede Hz was their first record that wasn’t greeted with paroxysms of blind pleasure. Yes, they are our Beatles!

The tweaked and nearly impenetrable atmosphere of Centipede is more engaging live because you can’t help but become digested by it, even if the band’s mixing still sounds off at times (certain sounds, samples, and tones just don’t cut like they do in the studio). It’s very mid-range bassy, like sinking into a lagoon. Panda Bear’s vocals in particular were very muddy. The last time I saw them was also at the 9:30, four months after Merriweather came out in 2009. Even though they had the room pogo-ing that night too, songs like “My Girls” and “What Would I Want? Sky” were sparser, with less fuzz around the edges. The constant sort of radio wave assault they’ve had going on for a while makes the show feel even more seamless, like four separate suites. Now they’re in victory lap mode, and I really enjoyed seeing how comfortable and in the muscles they were with these songs that turned a lot of crowds off for a long time. “Father Time,” a song that never stuck out for me, came alive as the whole room shouted, “a long TIME AGOOOOOOOOOOO” along with Avey Tare. It’s a two chord groover that, stripped of its electrical interference, would fit on Fleetwood Mac’s Tusk or Steely Dan’s Gaucho.

The most encouraging part of the show was seeing how young everyone was. The AC has a constantly regenerating cult fan base of teenagers, who hear an album or a song and follow through to find a decade worth of gold to sift through. You can always hear the people around you discussing favorite songs, B-sides, alternate versions, and trying to guess whatever song the band is currently teasing, exploding in joy when they turn out to be right. As far as the set list goes, there were no surprises or new songs (“My Girls,” “Brother Sport,” and “The Purple Bottle” were riotous and chemical as usual), but there is no doubting the power of this most formidable musical unit, arguably the most influential group of the last decade, and a band that continues to create and perform non-stop, whether it’s together or on their own, with almost no acrimony to speak of.

I feel privileged to be able to see Animal Collective now, because in 30 years, some kid is going to put on Feels and have his life changed. And until they disband or die, there’ll be hundreds of those kids planted in front proud to wear the X’s on their hands, feverishly discussing and wondering what their favorite band is going to play.