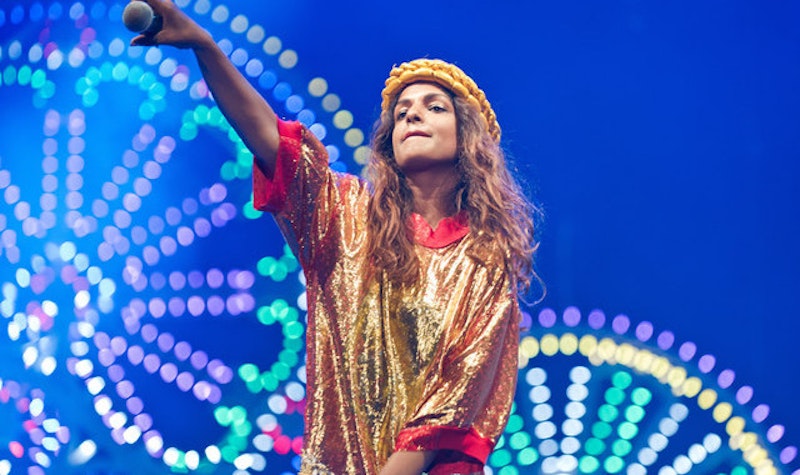 “Borders” is that rarest of beasts: a M.I.A. single whose chorus rips off a classic Kenan Thompson Saturday Night Live sketch. As her patois jack-knifes through clipped, murky production, the resulting dissonance is a reward, of sorts, if you’re only half listening: alien yet laconic, kinetic yet aimless. This is second-gear M.I.A. that downshifts into third-gear M.I.A. at the moment you pay more than a little attention to lyrics that shrug past like afterthoughts, leaning too hard against the admittedly powerful visuals of the accompanying (M.I.A.-directed) video. It sucks, being bored by this, because I respect the anti-ideology, World Town ethos Maya espouses, but mere intent isn’t enough anymore.

What makes “Ghost Baby, Ghost” so special? The song can’t figure out what it wants to be or how it wants to lash out. Everything, gloriously, is at odds: the vocal constipated and folding in on itself, the drums cramped and tinny, the guitars shuffling between down-and-out goth low-end and buzzsaw Dick Dale. When the tone brightens and the tempo surges—slightly—in the final third, it’s as though you’ve instantaneously traveled from a haunted party house at dusk to a meadow in early afternoon.

When was the last time—separately or Collectively—that these boy-men appeared to be having quite this much fun? Loose, daft, and mellifluous, “FloriDada” bounds and pants like a golden retriever somebody tie-dyed on a dare, the ultimate Animal Collective straw-stan’s unconscious ideal of what Animal Collective should represent. A trio for now, they’re on their best and weirdest behavior, a “Wipe Out” head fake here, a hip flask full of scat-babble there, a cornucopia of melodies and half-melodies scattering everywhere else. Spin this thrice and you officially have my permission to abstain from Beach Boys Christmas carols this holiday season.