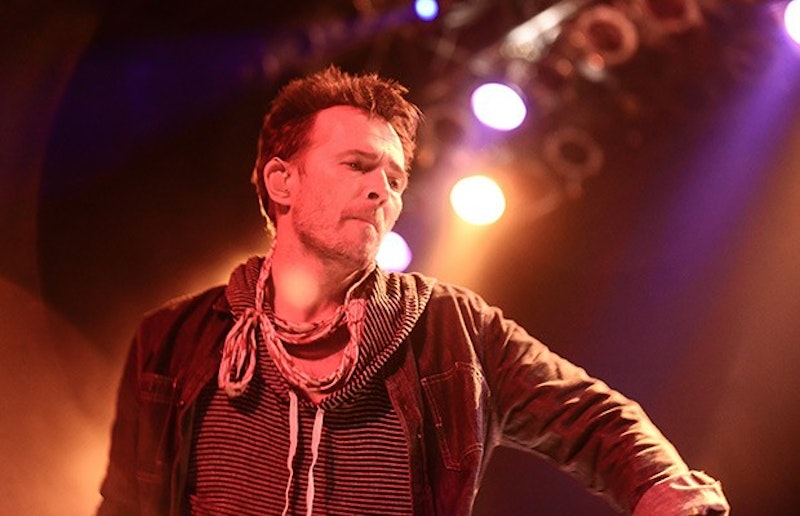 “I have no use for that guy,” I cracked to a roommate. “He’s a waste of skin.” It was my freshman year of college, and I was slagging off another classmate we both knew. “Damn, that’s harsh,” the roommate replied, recoiling, and I took a moment to pat myself on the back. I was proud of myself. It was a vicious, unnecessary remark directed at a person I didn’t know who probably didn’t deserve it; I can’t recall much about him, even his name, only that his then-girlfriend was warm, beautiful, and had a fantastic laugh. I relate this story because that’s who I was back in the autumn of 1995 or the spring of 1996.

Several months later, in the lead-up to the 1996 U.S. presidential election, Matador Records produced a number of mock “Rock the Vote” flyers, dubbed “Stop the Vote.” One of them featured a Scott Weiland look-alike named “Scott Wayland,” a “depressed rocker” who was quoted as follows: “Not voting provides me with valuable time to think about myself.” Student government elections were taking place around this time, and I printed out several copies of this flyer and posted them in the student center. A troublemaking narcissist, I couldn’t figure out why this wasn’t catching on; why wasn’t anyone talking about it? “Maybe because it isn’t really funny?” A friend suggested; he was right.

Some years later, when the body of Layne Staley was discovered, my immediate reaction was “why couldn’t it have been Scott Weiland instead?” It was a terrible thing to feel or say, and appeared in a column I wrote in a Chicago magazine that’s no longer published.

It’s very easy—maybe even instinctual—to attack the people around you because you can. It’s even easier to attack people who are rich and famous, but that doesn’t necessarily mean any of us should attack them. A longtime friend zinged me recently on Facebook over something I said about Ben Carson, something I still feel was justified. The friend essentially pointed out that Carson had helped a lot of people, which I’d never denied, but that zing chilled me and stayed with me for an uncomfortably long time.

Someday, Carson will die, and it’s impossible for any of us to know what anyone will have to say about it. Scott Weiland died a few days ago, and the outpouring of grief or recognition in response—much of it quite thoughtful, from folks I know in the music writing universe—has been as heartening as the raw shock of that passing. So this is as good a time as any to admit that a) I wasn’t a devoted long-time Weiland fan, but b) music Weiland made or made with others blew my mind between 1992 and 2011, and c) it’s sad that he’s gone. 12 Bar Blues is fucking amazing, a solo debut that in a different era would have won more than a tiny cult following. Aspects of Happy in Galoshes—particularly “Paralysis,” arguably one of my favorite songs this century—are raging and awesome. The Stone Temple Pilots’ Core is ridiculous and overblown but seared into my teenage memory; Purple is undeniable all around, and anyone with a yen for hard rock should be listening to Velvet Revolver.

While Weiland was alive and doing most of these things, people laughed at him. They laughed at the drug problems, fashion choices, multiple band break-ups, police reports and the flubbed concert videos because it’s easier to laugh and jeer at someone on a relative pedestal than to attempt to empathize. As I type, some folks are still laughing or judging the legacy of a person who left behind children, family members, and friends and, aesthetics aside, helped inspire thousands of young people to express themselves creatively. It’s very, very easy to disdain, to translate your own depression and inadequacies into venom—I know this from personal experience, and it’s something I’m still trying to change in myself. That ease doesn’t make that knee-jerk coarseness defensible.