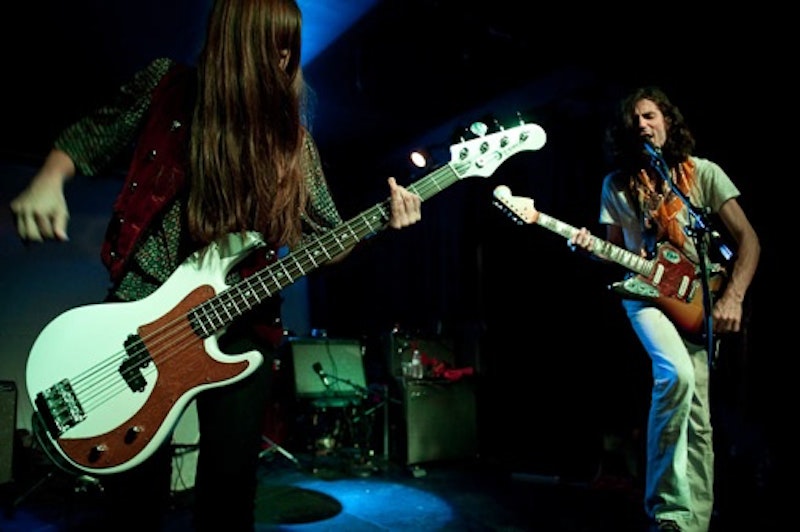 Few things in this world are weirder than psyche-rock songs where grown men conduct one-sided conversations with arachnids. Stranger still: psyche-rock songs about spiders where the singer is taking on the point of view of a wary, lachrymose fly. Maybe this isn't as bizarre as it seems: flies have absurdly short life spans, so if we assume that the fly Guy Blakeslee is pretending to be is sentient and has some self-awareness, it doesn't seem unreasonable that he wants to flame out, not fade away. Blakeslee's guitars are here pedal-effected into thick, aromatic wisps of smoke, curling and curving inward and outward, though at moments they kick up skronk-y sprays and crashes—a passive-aggressive cocoon within which Paz Lenchantin's bass and Derek James' drums are at times of being drowned. This, along with Blakeslee's trembly quail and what some might read as a daisy chain of psychosexual double entendres, encourages the mistaking of normal life for an altered state. If you're at all familiar with Baltimore's Arboretum, "Spider" sounds sort of like that, only way, way more burnt and fatalistic.

Morgan Delt, "Beneath The Black and Purple"

By contrast, on "Beneath The Black and Purple," Morgan Delt begs not for death's erasing embrace but for a sweet release from an opium den, maybe. The quaking bass at the outset telegraphs "Misirlou," but that's a red herring since "Purple" swiftly goes on to caramelize very early Smashing Pumpkins and fairly early Ariel Pink's Haunted Graffiti, with some horror flick soundtrack cheese dribbled on sweetly at the end, by which time everyone feels as decentered at wits end as Delt sounds. The tone here is like a hothouse of wild mushroom spores at 3000 parts per million with an oscillator to set a galloping if turgid rhythm, somebody throttling a tambourine, fingers sliding madly up and down strings. "Purple" has hair down to its ass, definitely, and it's seemingly over before it has an opportunity to kick into high gear.

"Time of Waste" feels like a Jack-in-the-Box full of successive series of Jacks-in-the-Box, sonic abracadabra begetting itself into glitter-eyed infinity even as it's impossible to say what this song is from second to second: pan-cultural house music, accidental pop, Bhangra, electronica, radio diva chart shit, dancehall or bust, mutant rap, ascension-tip noise. (The Greek chorus effect at the end is totally primo Prince. And then there's some kind of athletic harp-string plinking happening there, too, sweet Jesus.) My estimation of Gang Gang Dance, separately and collectively alike, rises with each passing half decade, and this cut from Brian DeGraw's stupidly named solo outing might the close to some sort of artistic pinnacle, doing an inspired end run around whatever circuitous approach to the mainstream that Eric Copeland/Black Dice are charting over eons by plugging into the zeitgeist in a way that's so uniquely GGD that it's somehow indistinguishable from what's happening in popular music right now. This is not going to be easy to hear, so I'm going to just say it: "Time of Waste" out-M.I.A.s the new M.IA. album by several degrees of magnitude, ego-tripping around the globe and changing costumes at each customs counter without, you know, actually being about anything in a way that's legible. Holy fuck.