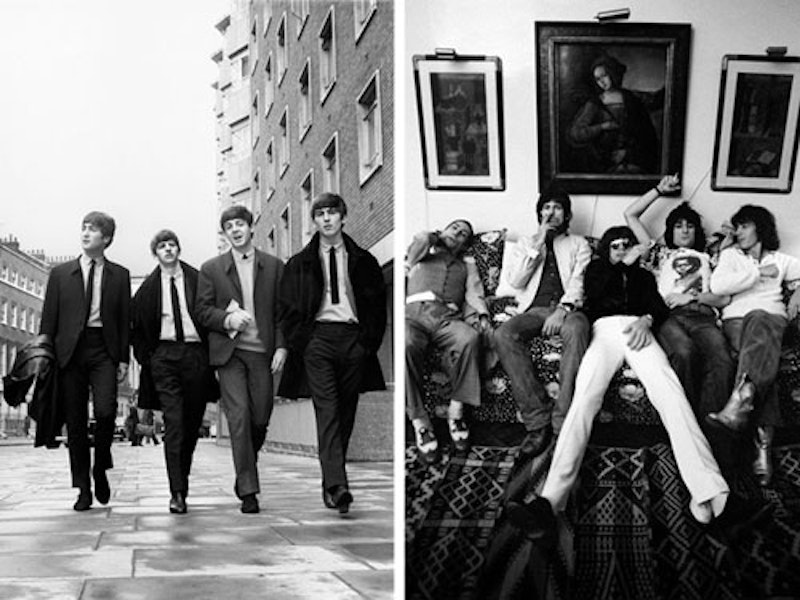 Just last summer, at an immense family dinner, my cousin’s 16-year-old son asked a question I hadn’t thought about in decades: who did you prefer, the Beatles or the Stones? Talk about shaking the cobwebs from a mind that’s been both informed and cluttered since that 1960s staple was relevant. Richie was adamantly in favor of the Beatles, while admitting he wasn’t all that familiar with the catalog of the early Stones. (Really, how many kids know “Play With Fire” or “The Singer Not the Song”?) My answer was more bemused and nuanced: to me, I told him, Bob Dylan was number one, period, and besides, the Beatles/Stones conversation-starter was more complicated. They were the top groups of the 60s, but where I stood depended on what single or album was released in any given six-month period. The Beatles had the earlier start, but when “The Last Time,” and then “Satisfaction” hit the AM airwaves, well, the match was on.

Like looking at old photos and letters tucked away in a box, it’s a nifty bit of nostalgia to fritter away some time. Last weekend, I finished historian John McMillian’s new Beatles vs. Stones (Simon & Schuster) and it was a delightful read: the author, who was born after the glory years of both groups, takes a very moldy topic (the number of books about the bands stretches from Liverpool to London) and, because of his relative youth, gives it a shot in the arm. That such a book was written by a man who wasn’t around when the Beatles first appeared on The Ed Sullivan Show on Feb. 9, 1964, wasn’t all that daunting or depressing; live long enough and the events of your youth are presented by a fresh set of eyes, as opposed to an account by someone who was intimately familiar (or pretended to be) with the subject. I’m a sucker for anything that Greil Marcus writes about Dylan, but that’s the old guard, which is slowly giving way to authors like McMillian.

It’s McMillian’s contention that everyone had a preference, however slight, when considering the Beatles and Stones. The author won’t reveal his own preference, smartly writing that he’s merely “show[ing] how their rivalry was constructed.” I think he simplifies the split by saying those who chose the Beatles were more likely to be conformists, while Stones partisans were rebellious (and maybe a little more obnoxious about it). He reiterates the commonly held belief that the Beatles were far preferred by parents and played by the rules of the pop industry, while the Stones were the “bad boys” who personified the “danger” of rock ‘n’ roll. That wasn’t my experience: after seeing the Beatles on Ed Sullivan with my four older brothers as an eight-year-old, our parents didn’t think the group was at all wholesome. The hair! The same reaction was felt by my friends; and at school, the teachers were unanimously disgusted. In fact, the next day, one of my brothers bought the first two Beatles LPs, and the five of us had to furtively play the records out of our parents’ earshot.

Nevertheless, McMillian devotes many pages in his short book demolishing the images (concocted by their managers, Brian Epstein for the Beatles, Andrew Loog Oldham for the Stones), detailing the far scruffier upbringings of the Liverpudlian Beatles as opposed to the middle-class Londoner Stones. Not that any of the combined members were brown-nosing High School Harrys. I had no idea—or don’t remember—that both John Lennon and Brian Jones were really nasty characters as teenagers; that both groups valued success and money over making political statements isn’t news, but that the Stones were given a pass by student activists was more surprising.

McMillian doesn’t mention it, but Mick Jagger acquiesced to CBS when, in preparations for appearing on Sullivan’s show, he agreed to alter the lyrics of their hit “Let’s Spend the Night Together” to “Let’s Spend Some Time Together.” If he were paying attention, Bob Dylan must’ve snorted, since he skipped Sullivan altogether in May of ‘63 (sacrificing a huge commercial boost) when the censors wouldn’t allow him to sing the hilarious “Talkin’ John Birch Paranoid Blues.” Dylan had balls, while Jagger & Keith Richards rolled over.

While a lot of Beatles Vs. Stones recounts familiar material for old-timers such as myself, McMillian’s extensive research does include a few eye-openers. In 1967, for example, Jagger appeared—“loopy” on Valium—on the acclaimed Granada Television public affairs show World in Action, moderated by one of the U.K.’s most esteemed journalists, William Rees-Mogg (who, after a storied career with, mostly, The Times, died last December at 84). McMillian reports that Jagger was “embarrassed” by his rambling answers about rebellion and the state of British society. Yet, 40 years later, Rees-Mogg said that Jagger’s viewpoint, however awkwardly presented, was a whisper of what was to come during Margaret Thatcher’s reign as Prime Minister. Rees-Mogg: “It was not the soft-liberalism of the Beatles but the libertarian Rolling Stones who best predicted the Anglo-American ideology of the 1980s.”

Don’t expect a lot of opinion about the numerous records the Beatles and Stones released in the 60s from McMillian; he’s more interested in the phenomenon of the rivalry of the two most influential bands of the time. He does say that Sticky Fingers was “ass-kicking,” while I always thought that record was a place-marker for the extraordinary Exile on Main St. Revolver (my favorite Beatles record) and the Stones’ brilliant Between the Buttons are given short shrift, but I’m getting pulled into that old debate again. Also, give McMillian credit for not claiming that the arrival of the Beatles “healed” the youth of America after JFK’s assassination, and for skipping any reference to Lennon’s unfathomably beloved solo song “Imagine,” perhaps the most treacly post-Beatles release this side of everything McCartney produced after the band’s break-up.

I’ve no idea whether universities still offer classes on the great rock ‘n’ roll acts of the 60s and 70s, but if so, McMillian’s Beatles Vs. Stones ought to be included in any such curriculum.