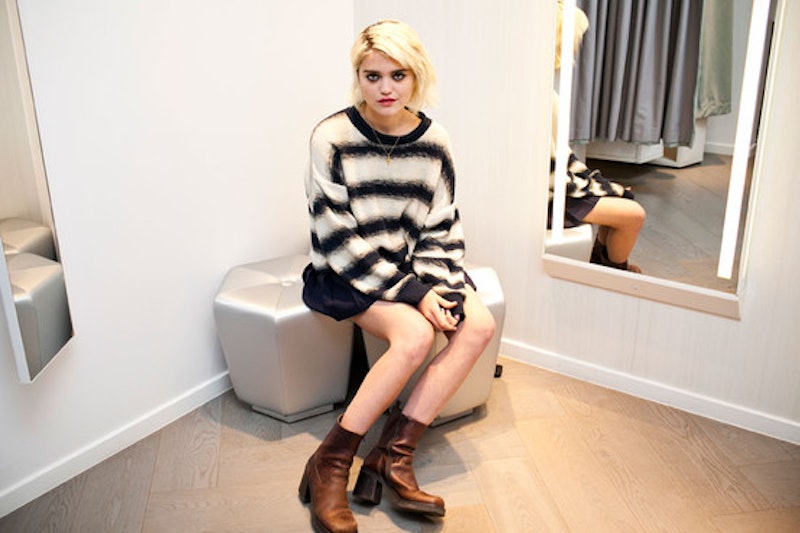 I was born in 1992. My earliest memory of popular music is the Macarena, followed closely by the Spice Girls, the first band I loved. Their hooks were chemical, they made me feel insane, completely overwhelmed by the phenomenon of music. I couldn’t understand or care about each Spice and whatever the story of Spice World was, but I’ll always remember ecstatically dancing in the aisles at a near-empty matinee showing somewhere in Midtown. I had waited the whole movie to bust a move during the title song, and felt a sharp sense of betrayal, confusion, and cynicism when the song didn’t come until the end. I was baited for the first time—as equally depressing as being told by an adult that eating Gushers would never expand your head into a gigantic luminous raspberry. Britney Spears and the boy bands were right up next, alongside butt rock.

The point is, people my age grew up in this bizarre, mottled pop music landscape, where Britney Spears, N*SYNC, S Club 7, Limp Bizkit, and The Beatles’ 1 were inhaled all at once. It was manipulative, dishonest, and crass—you learned the rules of this culture through music like this, like having to wait till the end of Spice World to hear the title song. Keeping all this in mind, it’s not hard to see why Sky Ferreira and her debut LP Night Time, My Time are so compelling. Ferreira was also born in 1992, and went through puberty in recording studios, executives’ offices, casting calls, attempting dozens upon dozens of songs and images and looks, treated like a potential commodity at first, money in the bank. As the years passed by without any hits, any big press, she got shafted by her label and everyone who worked for her. It’s an archetypal music industry story, and it happened all before she ever had a record. A victim lost in a wasteland of wannabes dreaming of global fame like they saw on TV as kids, used by people in the music industry who couldn’t testify in court to ever having liked any piece of music over the dollar bill.

Night Time, My Time is at once an acidic and triumphant fuck you to the press and music industry insiders, and a compelling pop record of sonic and lyrical substance, not so coyly trying to straddle the line between the pre-teen mainstream with dross like “Boys” and “Ain’t Your Right” (the first two songs), and a fickle and suspicious indie world that click their tongues and silently raise their eyebrows in a neutral expression when she mentions Suicide as an influence on the excellent track “Omanko.” Producer Ariel Reichstad’s work here is fantastic—he’s attuned to how sounds can be fatiguing especially in candy pop, and there’s a remarkable warmth to the sonic palette of this record. A lot of the melodies on the first half of the record are one step away from Katy Perry, but there’s a nuanced, gritty, scientific approach to making what has thus far not existed: pleasure pop that you can listen to over and over without getting nauseous.

If you’re not convinced, listen to “I Blame Myself,” a Top Five song of the year for me. It’s a poignant assessment of her time spent withering in the potential pop star mill, a dehumanizing purgatory, but taken at face value, the chorus, with its gorgeous, expansive melody, is a universal mantra: “How could you know what it feels like to fight the hounds of hell?/You think you know me so well.” Ferreira’s voice soars above glistening tinker toy pianos and driving, unremitting, determined drums. “I Blame Myself” is transcendent, innervating, and full of strength—everything that great pop music is supposed to be.