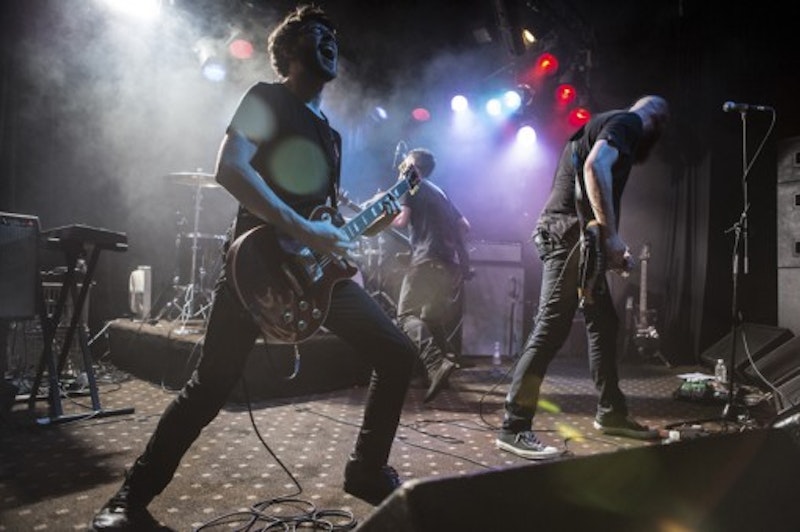 Sleepmakeswaves, "A Gaze Blank and Pitiless as the Sun"

At first the guitar dithering is just nervous or ticklish, as if this Australian outfit was flexing its muscles, testing its powers. Soon enough, though, they're feeding out acres of black-metal lite fiber optic cable to any clinging-to-life survivors desperately in need of sustenance, rescue, and/or a steady post-Mogwai mainline. The scene shifts from violently loud and stirring to contemplative and calm, then back, then forth. The quieter moments put me in mind of gliding through an undefined void on a zipline at snail speed or lounging aimlessly on a mist-shrouded dock, with Kenny G trailing me, playing an expressive if not especially virtuoso solo. The more explosive moments are like being astride an intense but indecisive avalanche, which can be awesome or a straight buzzkill, depending on one's mood. Certainly Sleepmakeswaves does this extremist post-rock expressionist dance very well, albeit in an era where I'm shocked that anybody still does it.

Authenticity pays a key role in most conversations about "Hold On," a song that conceptually transforms into The College Dropout's "Never Let Me Down"—more canon-bait-in-the-making that trades on the illusion of providing a hand up (rather than a hand out) via urban pop. This is accomplished by having the core performers enunciate the same phrase, and by having producers make it seem like those core performers are enunciating that same phrase nearly in unison, so it becomes almost a split-screen of each man, in a different location, saving someone from death by falling at a great height.

There is the sense of redemption, of the conferring of hope, and whenever I hear "Hold On" I like to imagine some young striver who doesn't give one whit who peddled cocaine or who was a prison guard simply vibing and soaring on the atmosphere of encouragement so engendered—to ace an exam, to excel in the physical sphere, to just accomplish something major. Also, whenever I hear "Hold On," I like to think about how fucking happy and content Kanye West comes across here, merrily hum-warbling the hook through Auto-Tune, un-credited, one of the biggest names in rap playing geeked out label head hype man without singing a word; unlikely as it seems, he hums like someone who's won.

Tim Hecker's Virgins will get you in a full nelson without you even realizing it. On the first two listens, it's a sleepy avant-garde lark; thereafter, Virgins quietly owns you, as essential as white-blood cells and as spectral like a darkened, mammoth arboretum with a haunted Coleman lantern flickering at its core. Given this, it's no surprise that "Amps, Drugs, Harmonium" sounds like the result of some deranged collagist painstakingly piecing together naive flutes and wobbly birdsongs into a proper song—which is great, because the result may leave you questioning whether what you smoked was a Marlboro, a Swisher Sweet, or something stronger. Harmonium is the culprit here, of course, with splashes of piano added for color and flavor, stirred in with an ivory-capped walking stick made of poached bamboo. When you come to, groggy, in an unfamiliar bed, Virgins will still be playing, locked on repeat—and you will like it.