Melbourne is sweet, but a retread. 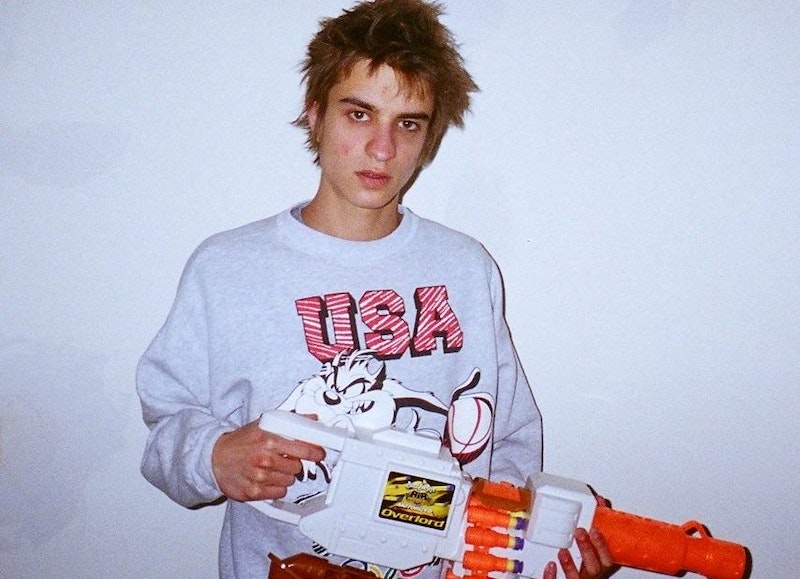 A friend tipped me off to Jackson Scott. He saw one of his first shows (opening for Deerhunter). He said Scott, who plays with a backing band but writes his own material, reminded him of Nirvana and that the main guy was “a real weirdo.” Sounds great, but his debut Melbourne, out now on Fat Possum, sounds nothing like Nirvana, except that Scott is sad and sort of mysterious. The production Melbourne sounds a lot like Mac DeMarco, but DeMarco has great songs and that charisma, yes, the star power, because the first time you heard “My Kind of Woman” or “Freaking Out the Neighborhood” it made its presence known, a new piece of musical life shooting out from the peephole of nothingness. That’s what great songs are, living things that never die, pieces of stimulation and light that came of nothing. Production, style, aesthetics, mission statements—these are all completely secondary to the strength of the song, if it translates to just acoustic guitar and voice.

But Scott’s opener “Only Eternal” is a sweet, waterlogged ambient guitar piece that borrow heavily from Grouper, intentionally or not. Like a lot of the songs on Melbourne, “Evie” is caught between a couple dozen disparate production and songwriting influences. The hidden distant warmth of the guitars and the swells of dissonant, errant feedback recall Radiohead circa-Amnesiac, with half a hook that goes malnourished. “Never Ever” is similarly underdeveloped, driven by a lazy phaser guitar, before an abrupt sound collage moment, where you hear snatches of voices and then some more rumbling. Everything is opaque: the chord structures, the gauzy sound, Scott’s boring and distant lyrics. This is a debut, but most everything he tries to do, someone else has done it or is doing it better, right now, so why bother?

“Evie” is a sweet song, but the distance created by Scott’s lyrics, mostly indecipherable and bland boring plain when heard, negates any significant emotional attachment that may have been had. There’s potential, don’t know if it’s being squandered or already wasted. “Sweet Nothing” is a hodgepodge of stock chord changes aided by generous helpings of reverb and airy, infinite seeming vocal sounds. Scott’s songs are a lot more conventional and dull compared to his RIYL: Syd Barrett, Rivers Cuomo, Kurt Cobain, Elliott Smith. His record is non-assertive and laid back in a tranquilized way, beyond any contrived apathy, simply an absence of thought, or anything to say. “Tomorrow’s gonna go away, I know” Scott sings on “Tomorrow,” and yeah, we all know we’ll accept banal lyrics from voices that hit us in the heart.

Melbourne is a decent debut record, and I’ve been listening to it pretty regularly the past few days, but its lifespan is short. There’s very little to grab onto, and he’s missing whatever makes his heroes songwriting geniuses. The production is actually very good, very reminiscent of Grizzly Bear’s Yellow House, but the songs and the personality are just so run of the mill, I probably won’t remember a note in six months. Then of course he’ll be headlining Coachella and I’ll be deep into my second shoe, but hey, I still want to hear what’s next.