The past is a record of inspiration but also defeat. 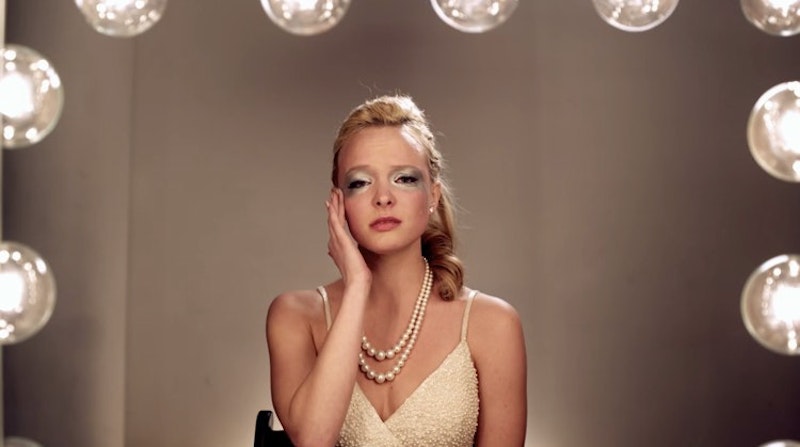 I'd been put off by the aggressively retro cuteness of Lucius, a hot new band with an album out this week. The hooky, sunny 60s pop combined with the two frontwomen (Jess Wolfe and Holly Laessig) who are always styled exactly alike—it's like a more self-conscious, more earnest Bangles. And I love the Bangles. But I don't know that they get better if you make them more self-conscious, or, for that matter, more earnest.

What finally sold me on the band was the video for "Turn It Around," directed by Matt Pizzano. In it, Wolfe and Laessig are cast (with winking inevitability) as 60s go-go dancers, shimmying and boogieing in glamorous blue dresses against an orange proto-psychedelic background while well-scrubbed fans indulge in quasi-Beatlemania.

The video's protagonist is one of those fans, played by Auden Thornton. Thornton is bopping and chattering with her friends happily enough, until another dancer, also played by Thornton, appears on stage. Fan-Thornton is dumbstruck by star-Thornton; she stares, checks around her in embarrassment, stares again, and finally meets the dancers eyes in a long, frozen moment.

Since Thornton is both fan and star, the desire here is most straightforwardly read as a wish to become a celebrity. And indeed Thornton-fan goes home and gets her hair and makeup done to look like Thornton-star, all the while fantasizing about appearing in a photo shoot as a model. The video presents the styling process (of both fan and star) as uncomfortable and manufactured, so that, as ReDigi says, you could easily see the piece as being about the dangerous artificiality of "bottle-blond glamour" and beauty culture. From this perspective, the video is sneering at, or at least critiquing, the band itself. The lead singers clearly enjoy dressing up, and are more than a little seduced by the idea of being 60s stars, just as Thornton is.

But there's another interpretation. The line between wanting to be and wanting erotically isn't that distinct. Thornton's reaction to her other self could easily be read as love at first sight; her nervous glances at her friends are recognition of illicit desire, and a fear that she'll be discovered. Even her decision to style herself like the star (or like the incessantly twinned Wolfe and Laessig) could fit into a story about the closet, as Rachel Oblak explains.

I thought the butterflies I got when I saw a pretty girl were normal—that everyone could recognize beauty in the same sex (or at least that all girls could). I convinced myself that I was merely able to see those girls as a guy might see them. The achy feeling I got around them, I thought, was an indication that I knew they were more beautiful than I, more to a guy’s liking than I, and more what I should be like. I strove to force my body to conform to the look of the girls that gave me that feeling. I distracted myself from my crushes by convincing myself that I needed to look like them. It turned the feelings of attraction into feelings of disgust with myself and hatred to those who “revealed my shortcomings.”

Desire to be with becomes desire to be becomes self-disgust and hatred—that's the story of the video, which ends with Thornton dancing for her friends only to have them laugh cruelly at her. The chorus, "she's looking through the wrong end of the telescope/turn it around," is, in this reading, not a call to shuffle off misogynist false-consciousness, but a hopeless recognition that how she sees is broken.

In her book Feeling Backwards, Heather Love points out that LGBT history often emphasizes hurdles overcome and advances made and tends to ignore sadness and self-doubt. This video doesn't, though; the song's cheerful pep and lyrics full of good advice ("She can't be bothered by the mistakes she's made/But she's forgetting that's what guides you to the rightful path") unfold against a story of discomfort, embarrassment, and failure. The images of Thornton trying to turn herself into something she's not, and then being mocked for it, are actually hard to watch. Similarly, the last scene, where she lies on the floor in misery reaching towards her glamorous, miserable self on the TV screen as it reaches back towards her, is only more painful because its over-the-top melodrama makes it ridiculous. High camp artificiality here doesn't distance so much as it underlines the extent to which the protagonist, whether glammed up or not, is a kind of manikin, an imitation of herself.  Her desire—even her desire to be someone else, as she reaches out to touch her false image on the screen—leaves her misshapen and false. The video sympathizes with her, but can't help her; the exhortations and energized dancing makes her, at best, more aware of an actualization she's denied.

Retro music often means nostalgia; a longing for, and glamorization of, a supposedly happier or more meaningful past. Here, though, retro also means feeling backward—not just in the sense of remembering, but also in the sense of feeling wrong. The past is an inspiration, but it's also a record of defeat and failure. There doesn't have to be a right end of the telescope, and time doesn't always turn around. Sometimes the television just switches off.