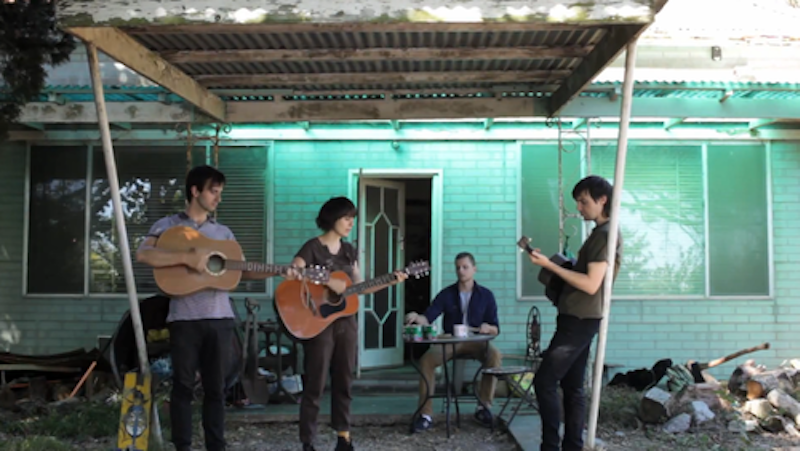 This single from San Francisco’s Melbourne's Dick Diver starts getting interesting halfway through, once they’ve gotten the shaggy-dog, half-power pop out of their system and wade into a semi-improvisational abyss. Blame it on the pedestrian, fake English-isms from the co-vocalists, which distract from impressive goings-on melodically up front; if only they’d fed their verses through a vocoder or something, just so everything felt a little less Free Design. Space cowboy guitar sproing at the midpoint—very “Captain Easychord”—is the first sign that “New Name Blues” is something more than a trifle. Then Dick Diver loses the plot altogether, stumbling blindly into one of those divinely untethered art-rock jams where it’s pretty much impossible to tell which way is up, or where you’ve come from, or even what year it supposedly is.

The experience of “Mesarthim” is best understood as a sort of perpetual, floating-in-place free fall—tumbling unawares from some elevated precipice but caught in the embrace of serious thermal updrafts that can’t push you any higher but won’t let you drop any lower. Levitation, by any other name, and here levitation equates to atonal drone contrails for days and a heavy drizzle of bell effects that wax and wane throughout. And since artistry isn’t generally understood as stasis, you just know a change is gonna come, eventually, which here means that the underlying drones slowly become less reticent and more resonant, a cicada shrugging off its shell with aching patience and maximum panache. Enter wowed, exit unnerved.

At their best, Pop. 1280 offer the perfect soundtrack to firing up electro-shock torture equipment. At their worst, Pop. 1280 conjure a dark, exhaustive vision of man as a cog in a relentless, unyielding machine. Post-Grid, the Brooklyn group’s LPs feel like actual work—for critics, a dirty word. The thrill is long gone, mostly. “Kingdom Come” writhes with trashy drums and a conjunction of synthesizers and guitars that crackle and sting like Portuguese man-o-war someone bred on a steady diet of first-album Suicide; singer Chris Bug’s manic bellow is the industrial thrash equivalent of a sheepdog punching a clock in a vintage Warner Bros. cartoon. “Here they come again,” Bug barks, again and again, and the exclamation feels damningly self-referential. To the band’s great relief and ours, “Come” benefits from being the only Pop. 1280 song on the new Toto Muere Volume 4 compilation—allowing for a greater appreciation of this particular aesthetic and suggesting that the remainder of Pop. 1280’s career should probably consist of a series of limited-edition singles.