New albums from The Secret Sisters and Rodney Crowell. 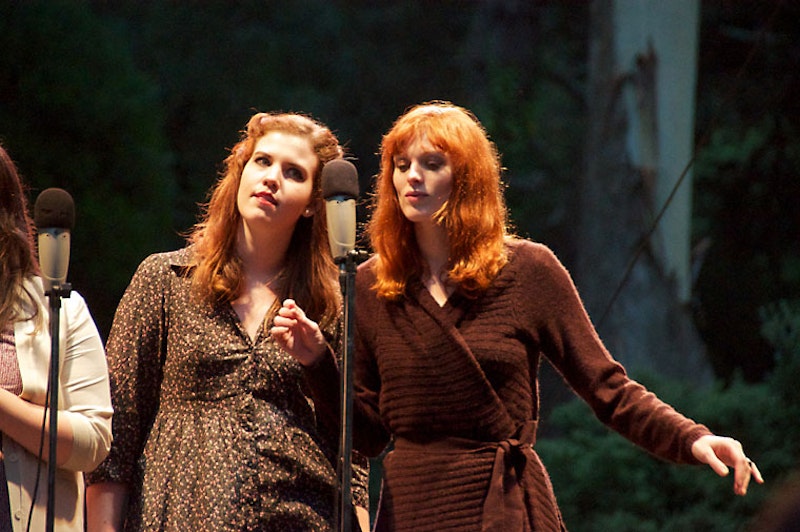 On first listen, The Secret Sisters’ Put Your Needle Down and Rodney Crowell’s Tarpaper Sky seem to toe a traditionalist line: if a sound existed in white popular music during the first half of the 1960s, you’ll probably hear it on these two albums. But in fact, the wide range betrays the date of origin. At the time, few artists were exploring this many avenues simultaneously. If you channeled Phil Spector’s Wall of Sound, it was unlikely that you’d also record country on the same album. The Sisters and Crowell conduct their historically accurate renditions with a roving, modern eye.

Put Your Needle Down, the second Secret Sisters’ release, is an immaculate jumble. Jangly pop rubs up against garage rock; the dark violence of 60s westerns faces off with high, close harmonies; strings and upright bass battle with electrified instruments. The album's producer is the ubiquitous T Bone Burnett, the man behind the highly successful O Brother Where Art Thou soundtrack. More recently, Burnett helped Diana Krall rework a number of ‘78s from the 20s and 30s.

The world The Secret Sisters inhabit is a brutal one. Even on the positive numbers, like “Rattle My Bones,” the sisters sing, “There’s no telling what I’d do/if I could get my hands on you”—an expression of love that just as easily doubles as a threat. “Pocket Knife” makes this explicit by issuing a warning: “Can’t you see my pocket knife? You can’t make me be your wife.” And in “Iuka,” you hear a tale of jealousy that boils over into murder.

Who’s causing all the trouble? Men, obviously. The singer of “Black and Blue,” begs a lover, “Please don’t say goodbye/give me another try.” The handclaps and the link between love and abuse are similar to those on the Crystals’ “He Hit Me (It Felt Like a Kiss).” “Bad Habit” pairs wild strings with a classic country line: “I can’t break this bad habit/cause this habit’s breaking me.” “Good Luck, Good Night, Good Bye” provides a ready-made rebuttal for the boys when they start getting ideas.

Put Your Needle Down ends with a tune that hopes for a way out—for the possibility of washing away past sins and starting again with a clean slate. But it’s a lie next to the rest of the album, and the Sisters know it. Like they sing on “If I Don’t,” “You gotta straighten up, but baby you won’t.” People don’t change, they only get more stuck in their ways, so “River Jordan” ends with the repetition of “bury me.” No one gets a fresh start.

Rodney Crowell’s Tarpaper Sky seems to exist around the same time as Put Your Needle Down—in the less dangerous part of town. Crowell has been making music since the 70s, before the Secret Sisters were born. His 1988 album, Diamonds and Dirt, had five top genre hits, like a country equivalent to Michael Jackson’s Bad, which came out the year before. D&D was resolutely old-school: Crowell covered Buck Owens’ “I Couldn’t Leave You If I Tried,” and “I Know You’re Married” sounds like a twangy redo of the Beatles’ “Please Please Me.”

Country, folk, rock—it’s all one mash to Crowell. “Fever on the Bayou” revolves around a chorus of “I love to see her come/hate to see her go,” which must be the gist of a thousand songs, so he spices it up with ample doses of fiddle and accordion. He also sings a portion of the song in French. Later, he touches on Chuck Berry (“Frankie Please”), brassy blues (“Somebody’s Shadow”), and gentle waltz (“I Couldn’t Be Me Without You”).

“Famous Last Words of a Fool in Love” is poignant despite its overlong title. Crowell cracks some jokes at his own expense—“I might have been a handsome man/back when I didn’t look so bad.” He picks up the pace, singing faster to mimic the excitement he feels at the prospect of romance, and then he slows it down again, stretching everything out as he sinks back to earth. There’s no threat here, only disappointment.

The traditional sounds are in some ways a feint for the Sisters and Crowell. These albums fetishize history, but at the same time, they freely rewrite it. That river doesn’t offer redemption, but hindsight allows you to do things differently the next time.