Ever Ending Kicks is "so into something and then not." 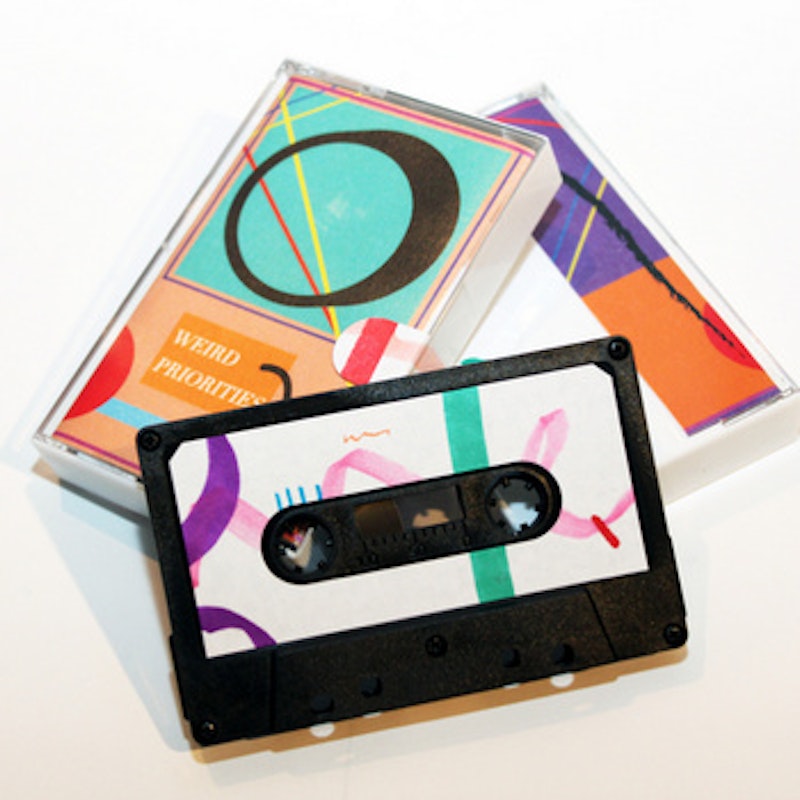 Sitting through a bad band is such a waste of time and space that whenever someone blows me away, I feel obligated to become their advocate for life. Deep in the muck, these guys and girls give me hope. I had the pleasure of playing with Paul Adam Benson’s solo project Ever Ending Kicks last week, at the Paperhaus in D.C., a surprisingly well-insulated home in a deserted residential neighborhood. With only 30 feet between the kitchen and the “stage,” the place felt packed with 100 people. Benson played first, calming the gentle chatter with his own spare sounds; most of his songs began with a looped phrase or rhythm on guitar, and then moved to Benson’s rich, crystalline vocals and some bass. “Outside Again,” the opening track on his 2013 tour EP Weird Priorities is mesmerizing: the slightly flanged and chorused guitar melody is ominous and feline, eschewing the simple sunshine of so many other solo, “bedroom” artists today. This music is lovely, romantic even, but it has a dark, creepy side. Not through signifiers, but in the melodies themselves.

Benson is in the midst of a three-month tour right now, bringing his colorful, regal songs to small townhouses, galleries, bars, clubs across America (at the Flywheel in Easthampton, MA this Friday March 1). Please check his tour schedule, available at the link above, because he’ll very likely be in your town soon. Benson’s sounds are humid, colorful, and fluorescent: it’s poppy by his own description, “thoughtful minimal experimental rhythm-oriented singer/songwriter with pop convictions.” The songs are borne out of fantasy, of a different, flatter, simpler world. Benson explains the name Ever Ending Kicks as akin to “being so into something and then not.” It’s the pure euphoria of novelty and the ecstatic excitement of finding something new, a fresh source of pleasure and heavenly experience. And it’s the same process that drives addiction: becoming consumed by the euphoria of your first use or first exposure to a band, movie, food, drink, place, or person that when you inevitably come down and the edge is dulled, you struggle vainly to reach that same spot of bliss, exhausting whatever you once found fascinating even further.

Songs like “Always In” and the slow, dense, and droning “Resolver” sound happy and pleasant on the surface, but allude to something much darker and something missing in this world. Like a joyous pleasure that once fulfilled you, and now seems dirty, gross, and tainted slightly. Benson is a man of few words, and his matter of fact yet opaque presentation of his material imbues Weird Priorities with something alluring and strange that separates it from all the other lonely boys making songs with loop pedals and singing into audio boxes in dorms, lofts, and bedrooms across America. The vast majority of those projects come off underdeveloped, derivative, obvious, and utterly uninteresting. Benson’s songs are immediately accessible and highly tuneful—your grandma will rave—but it’s neither delusional nor naïve in its sound: this music is spooky, and totally magnetizing.