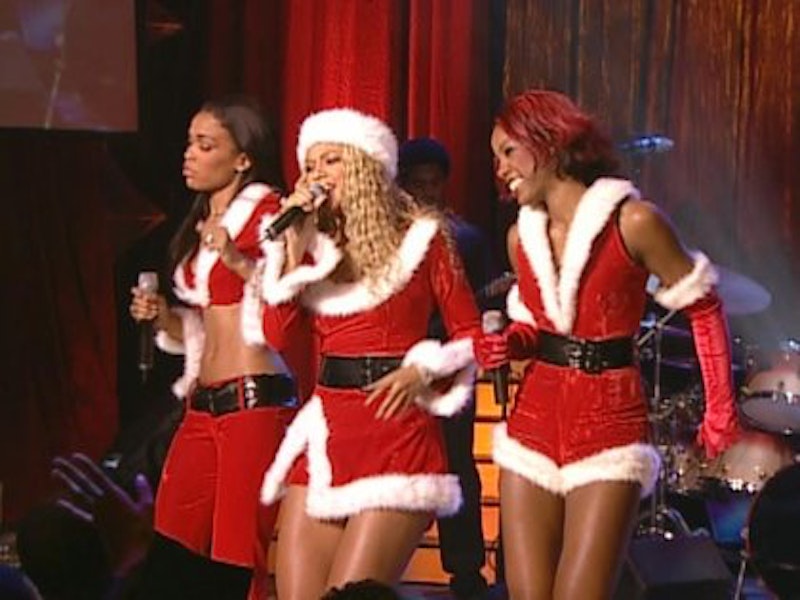 DC's 2001 8 Days of Christmas is determined not merely to embrace its hollow, plastic soul, but to tout it. The opening title track eschews all that "peace on earth" crap, and gets right down to tearing open presents. "Doesn't it feel like Christmas," they harmonize over the stock beat, and then start listing the gifts they've received from their man. "On the 4th day of Christmas my baby gave to me/A candlelit dinner just me & my honey/On the 3rd day of Christmas my baby gave to me/A gift certificate to get my favorite CD's."  Given the level of crassness on display, it’s hard to avoid the suspicion that those favorite CDs include a slew of Destiny's Child releases.

I find the no-bullshit materialism refreshing. If Janis Joplin could pray to the lord for a Mercedes Benz, after all, why can't Beyoncé go for a swim in a snowdrift of her own CDs, if that's what she wants? Still, a funny thing happens on the rest of the album. Destiny's Child, as pre-fab a group of hit makers as ever existed, starts to sound weirdly… sincere.

When Michelle Williams takes her solo on the smarm-up-to-the-elbows "Winter Paradise," for example, her nasal burred voice scrambles over the not-especially inspired lyrics, "Snowing and it's cold outside/Wrapping gifts by the fireside/My family is here, Christmas day is here/It’s that very special time of the year." But if the words are Hallmark, the background redeems them, as Kelly and Rowland sing syncopated "bum-bum-bums" in the background so sympathetically that it actually feels like love.

By the same token, the corny sing-along "A 'DC' Christmas Medley," is unexpectedly and affectingly joyous. The women roll ecstatically into and over each chestnut—"Santa Claus is Coming to Town," "Deck the Halls" and all the others you'd expect—jazzing up the vocal lines, bouncing here and there over the beat,  thumpety-thump-thumping with Frosty like he's the world's funkiest snowman. And there's palpable good cheer in the echoing call and response harmonies on "White Christmas," which sways and shimmers and then leans into the goofy "Platinum Bells," where the girls imagine themselves as dolls under every Christmas tree, spreading love to all their fans. For that matter, even the more straightforward renditions of "Do You Hear What I Hear?" (with Kelly Rowland on lead), or "Little Drummer Boy," (featuring Beyoncé's sister Solange) have a kind of easy, sweet, honesty.

Maybe Beyoncé, Kelly and Michelle all hate Christmas and just did the album for the cash. I can't read their minds. But it's certainly the case that the Christmas album format gave DC a chance to try something different from their usual radio-hit-formula albums—and the change-up is refreshing even for those of us who adore those radio-hit-formulas. Instead of drenching themselves in attitude and sex and giant beats, for once Destiny's Child gets to embellish familiar tunes and concentrate more on vocal arrangements than on hooks. The result is that they sound less like they're straining to be superstars and more focused on each other and their music.

The final song of the album is "Opera of the Bells," an intricate, four-and-a-half minute a cappella version of "Silver Bells," in which DC's voices wrap one around the other, turning themselves into a human carillon. It's an amazing virtuosic performance, from Beyoncé's first inhalation to the final full-throated vibrating harmonized "dongggggggg" at the close. It's the perfect ending to a perfectly wrapped commodity, that pre-fab thing you give as a token of your love. Maybe the sincerity is crass, or maybe the crassness is sincere. Either way, Destiny's Child was born for the season, which is why this is pretty much the only Christmas album I'll listen to at any time of year.