AraabMuzik Tries To Find The Best of Both Worlds

Bringing together the streets and the club. 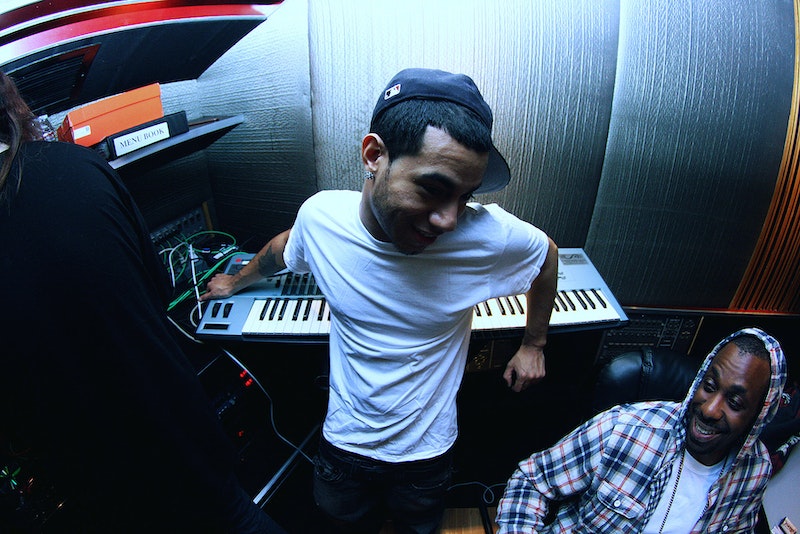 When Electronic Dream was released in 2011, it marked Abraham Orellana (aka AraabMuzik) as a singular producer. Though Orellana had been working under the Dipset label for years and frequently collaborated with rapper Cam'ron, it wasn't until Electronic Dream that he revealed his deep love for dance music. On the newly released For Professional Use Only, Orellana returns with a broader palette of sound, attempting to unite both the urban and the dance crowd.

These days Orellana is a highly in-demand live act. His million-mile-an-hour live drum programming has become the stuff of legend. Though there are loads of production tricks throughout, Professional Use has more of a live feel to it than any of Orellana's prior work. Aside from the RZA-sounding, minor key piano that creeps in its background, “Hammer Dance” is as bare bones as an AraabMuzik track gets. Four bars of distorted acoustic hip hop drums repeat themselves without interruption. “Runway Bass” has a similiar feel, though its bent, high-frequency synth tone makes the track a bit more of a club banger than hip hop heads may be used to.

To have Orellana take such a minimal approach only adds replay value. Indeed, much of the hip hop infused work on Professional Use allows the listener to understand how Orellana makes certain production choices. If you took the chopped soul sample from “Beauty” back to the 90s you'd have a straight J Dilla track. As an AraabMuzik track though there is the precise dialing in of digital reverb and compression, making it sound like a brilliant, modern gem. Orellana has a natural musicality. He's always been great at writing concise synth and piano hooks and “Street Knock” is no exception. You can all but hear DMX rapping over the top of it. At times, his use of piano also delves into more pensive territory. The melody to “G Riding” sounds more X-Files than “Shimmy Shimmy Ya”.

While the return of Orellana to his rap roots is exciting, it's the purely electronic material that makes Professional Use really shine. As a trance composition, “Heaven” sounds enormous; a ten thousand plus celebration in a stadium amidst fireworks. It's one of those tracks—machine gun MPC hi-hats over the top of glossy trance—whose effortless sound nearly obscures how elegantly assembled it is. “Never Have to Worry” would sound like a perfectly good electro tune, yet with the brute force of the drums behind it, the song becomes a completely different affair.

Though Professional Use, at times, gets carried away with its quest for the perfect crowd pleaser, it does arguably delve deeper. It is the perfection of a certain brand of electro/hip hop that Orellana has, if not pioneered, then at least unabashedly championed.