When you've run out of Beatles albums... 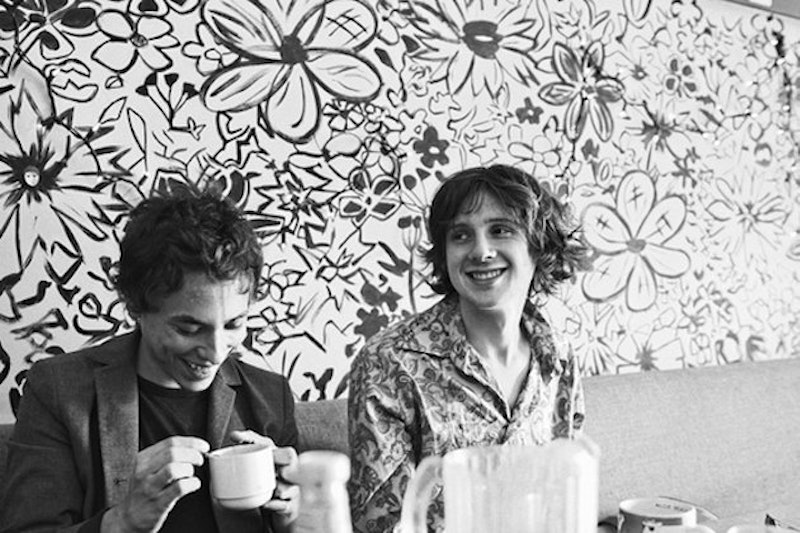 2013 may well be the year that indie becomes synonymous with psychedelia. Productions are becoming grainier. Rhythm sections are now thinking outside of the 8th-note paradigm. On their sophomore album, We Are the 21st Century Ambassadors of Peace and Magic, California rockers Foxygen reach for the brass ring of sonic pomp forged by the Beatles.

It takes chutzpah to reference the opening to Sargeant Pepper's Lonely Hearts Club Band. Even the Rolling Stones sounded derivative when they released Their Satanic Majesties Request around the same time. Whereas the Stones came off dead serious about their effort, Foxygen seem a bit more aware of their ironic statement. “In the Darkness” starts the album cheekily enough, with frontman Sam France sounding like a sleep-deprived Mick Jagger swaggering in a vocal booth at Abbey Road Studios. As an homage it's wonderful. The track even samples a live audience. An original composition, however, it is not. By comparison, “On Blue Mountain” is immensely more satisfying. A bit of a schizophrenic affair, what starts as a John Lennon-sounding piano ballad backed by slap-echoed hand claps spontaneously morphs into a frenetic honky-tonk number; “On the mountain God will save us/Put the pieces back together,” sings a chorus of children. What any of it means is hard to say; but the music has moxy. Indeed, much of what works here comes from Foxygen's sharp melodic sensibilities. “San Francisco” is supremely catchy. “I left my love in San Francisco,” France croons to a distant love who adds “That's OK. I was bored anyway.” It is a song that the Moldy Peaches wish they would have written.

Most of what Foxygen presents on 21st Century is undeniably influenced by the psychedelic rock of the 60's, while also venturing into 70's glam territory. However, in trying to encapsulate so broad a period the album can be frustrating. “Shuggie,” the band's current single, is riddled with editing issues. The focus shifts from verses of lyrically strong lounge music to a series of energetic bridges that don't work well as transitions. It ends up sounding too modern, like the band was stumped when faced with which of 28 different song ideas to copy and paste in ProTools. There's a bit of cryptomnesia here. It's hard to hear a track like “Oh Yeah” and not think that it's ripping off T Rex's “Mambo Dancer.” At a concise nine tracks however, 21St Century is worth the listen if only to hear sounds that you had forgotten, re-imagined through rose-colored party glasses.