Unfamiliar at first, and then it all makes sense. 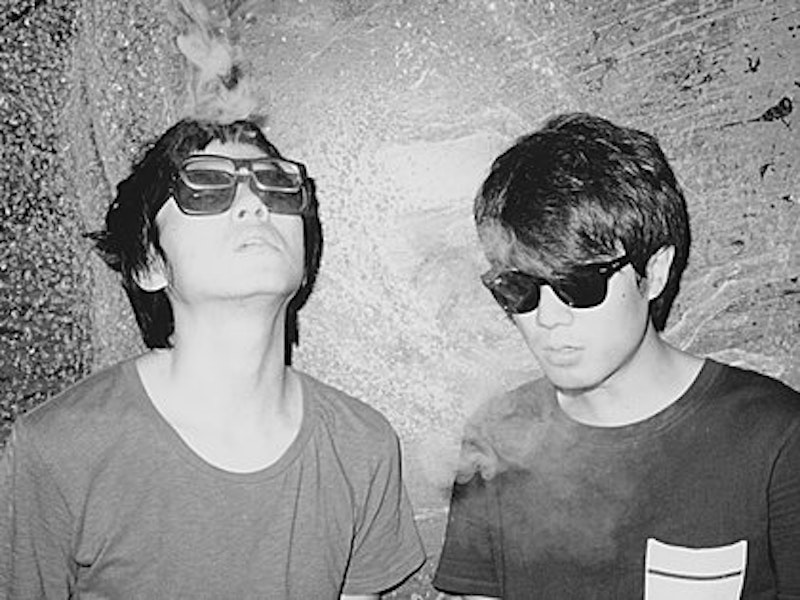 White+ is an experimental keyboard-and-drum duo from China. The first dozen times I listened to their new album (also called White+), that's pretty much all I knew about them… which seemed kind of fitting. Electronic music, after all, generally seems to strive for semi-anonymity. Often lyric-less, produced by computer, it's music faxed back to us through a mysterious phone line from the blank screen of the future. That weird "+" on White+'s name and their gnomic song titles on ("blacK," "silveR," "purplE," etc.) emphasize the music's opacity—as, for that matter, does their nationality, at least for a stateside monoglot like me. On the concluding track, "reD," a performer raps over the beat, but he's speaking in Chinese, so, to me, his words are as meaningless as the squalling dissonant feedback that interrupts him.

But that squalling dissonant feedback isn't really meaningless. It has a history and a context. The screechy bits in "reD," for example, sound more than a little like the sampled weirdness on the Beatles' "Revolution No. 9." Electronic music, especially on the more experimental end, may embrace anonymity, but that anonymity is still an identifiable trope. The nobody you're looking at is a nobody you know.

White+, too, is a nobody with recognizable features. Beneath those colored song titles, there lurks, not some bizarre and meaningful silence, but fairly conventional arty electronica.

Not that there's anything wrong with that! I quite like arty electronica, as it happens, and White+ gets great mileage out of the interaction between the drummer and the keyboard wizard. The track "orangE," for example, is built around a driving, jazzy, beat, over which the keyboardist layers syncopated piano-like figures and searing, guitar-like squalls and feedback. The result sounds a lot like fusion, but instead of heading off into mind-expansion territory the way fusion will, the song circles around on itself in repetitive rhythm loops, like Chick Corea caught in the spin-dry cycle. On "purplE," some guy mutters (in English) about becoming death, and then the drums lock into a quasi-martial swing while the keyboards imitate bagpipes, speeding up at the end of the track almost to thrash tempos with static blasts, like the Scots in kilts are taking off on rockets. "yelloW" is a more summery color; the keyboards shimmering Vangelis-like while the drums shift from high-hat tinkling to a loose, stretched out dance rhythm, a bright soundtrack by which to seek transcendence. "whitE" is a six-minute pedal-to-the-floor groove, with the drums kicking and the keyboards making like badass guitar strum. It's maybe as close as the band comes to rock; they sound like a less dissonant Sonic Youth.

There are contexts in which "a less dissonant Sonic Youth" could be a sneer, but that's not my intention. White+ is a thoroughly enjoyable, inventive band, which takes their sources—fusion, electronica, indie rock, rap—and puts them together in really creative ways. I was just a little thrown at first, I guess, by how familiar those sources were, and by how easily the band, from a Beijing scene I know nothing about, fits neatly into a paradigm I know quite well. Watching them perform on YouTube for example, is pretty much exactly what you'd expect—two skinny, casually dressed dudes, brainily rocking out. In another clip, they do much the same thing, only this time with screens showing psychedelic patterns in the Creators Project event space for interactive art in Beijing. White+ isn't some sort of unidentifiable amalgam of bytes from the future. Neither are they mad geniuses from a strange land. They're just hipsters who, as near as I can tell, like a lot of the same music that I do.