The Rough and Fundamental Beauty of The Marfa Tapes 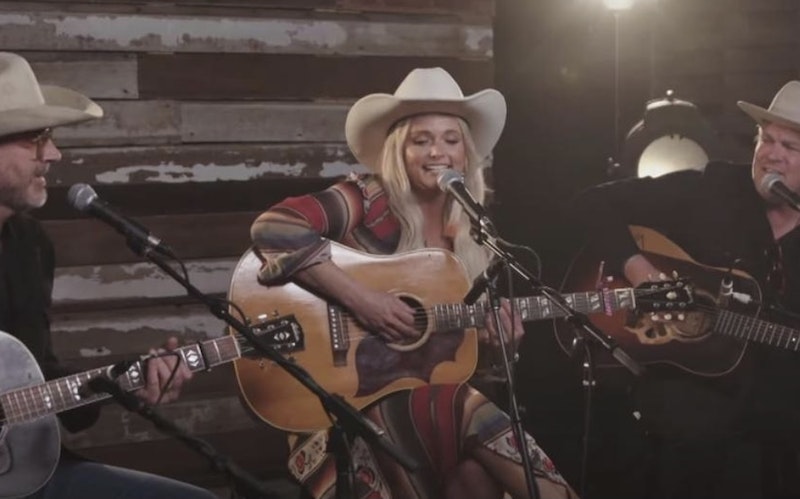 By the late-1970s Dolly Parton, a Jolene from the mountains of east Tennessee, was recording for maximum pop effect: "Islands in the Stream," for example, or "9 to 5." Well, more power and $$$ to her, and people loved those songs, even if they made country traditionalists want to hang ourselves, in proportion as we loved Dolly and thought of her already as central to the tradition. I could’ve more than forgiven Dolly if she had also been putting out some stuff like The Marfa Tapes: sitting around a campfire or a kitchen or in the bed of a truck with a couple of great musicians or co-writers, singing unadorned country music with no particular commercial goal.

Miranda Lambert is the Dolly-level Queen of Now. I'm into pretty much everything she's ever recorded (though I was puzzled by her performance with Elle King at the ACMs). But I love The Marfa Tapes, in which Lambert and her frequent collaborators Jack Ingram and Jon Randall (sort of second-stringers as country singers, but extremely successful as writers) beat a retreat to a little house near the artsy West Texas town, start cooking bacon and drinking beer, and recorded rough versions of 14 songs they've written as a trio over the last sevenyears or so, including "Tin Man," the ACM song of the year in 2016 from Miranda's classic album The Weight of These Wings, and "Tequila Does," the best song from her 2019 album Wild Card.

They've definitely got Dolly in mind. "Geraldene" is a rocking good reply song, an instant classic:

I could see you coming all the way from Amarillo
Truck stop red lips pullin' on some nicotine
Shining like the spokes on a brand new El Dorado
You're trailer park pretty, but you're never gonna be Jolene.

I wouldn't recommend trying to take Miranda's man under any circumstances, whether you're a Jolene or a Geraldene, though Gwen Stefani seems to have more or less gotten away with it. I have a feeling that Dolly texted Miranda over the weekend, telling her how much she loves that song.

The Marfa Tapes is yet another project that probably wouldn't have been released before COVID, or maybe even before Taylor hit transcendently with the stripped-down Folklore. Pretty soon mega-stars were singing huskily into the mic in their bedrooms, ditching vocal effects, sharing their feelings, getting all sad about isolation but on the other hand inviting people to a lot more intimacy (and a lot more material: everyone seemed to be writing all the time) than popular music was providing in 2019.

In some ways, though, this album takes the opposite approach: it heads outdoors, to one of the most wide-open landscapes in the world, a seemingly infinite horizon in all directions. And what it registers isn't melancholy: these three people are just having all kinds of fun. It's a lovely document of the joy that you can get from jamming with people you really like, just working on songs, partying, laughing at each others' fuck ups, enjoying each others' sweet moments and the moments of felicity that can emerge in a loose collaboration.

It's recorded extremely roughly, with all sorts of background noise: the wind and the campfire. (They released a film of it on Friday on Facebook, though it was supposedly available for only 24 hours.) Miranda flubs the lyrics a couple of times (even though she's reading them from her notebook) and everyone laughs. On the film, you get some cosmic observations about West Texas, but on the record itself, inter-song dialogue doesn't get much deeper than "That was so much fun!" And rarely has the fun of actually making music, the fundamental collaborative process, been so well-represented on a recording.

Randall and Ingram sound great, with Ingram doing a mild John Prine and Randall rolling a surprisingly sophisticated jazz and blues guitar. The harmonies are loose, but sweet. Obviously, the star is Lambert, however, who can go from husky-rowdy ("Geraldene," etc.) to pure and beautiful: "Ghosts," for example: a beautiful composition about love and loss, or Waxahachie("nobody ever left New Orleans as mad as I was").

These songs would also richly repay a full Nashville studio treatment, and I'd like to hear the whole thing again song for song, fully finished. Meanwhile, it's too late to get Tammy Wynette sitting around a campfire, harmonizing with George Jones and Conway Twitty, or whomever she would have enjoyed most. But Miranda is right on time and in her prime on Marfa Tapes.