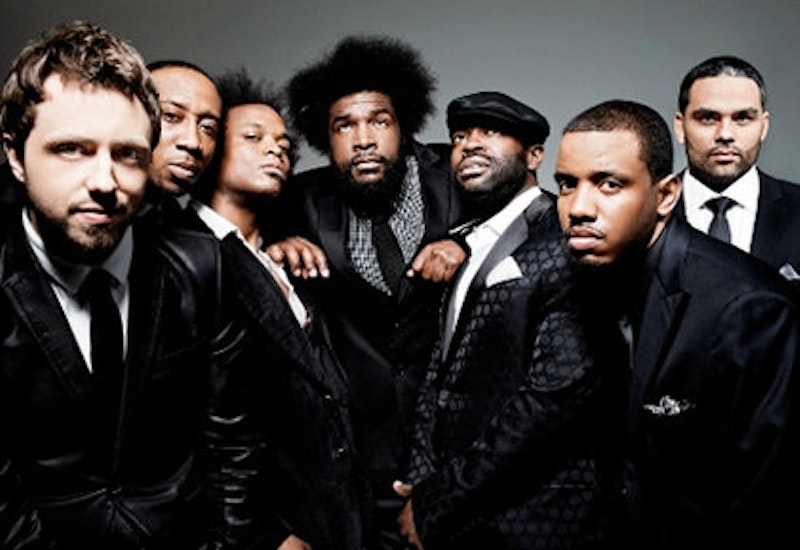 Let me make plain my neophyte Roots bona fides right now, up front: thanks to various public library systems, I’ve been able to sample most of their records and was impressed without being wowed. Most of the time, I find Questlove a fascinating quasi-celebrity personage; I am not a regular viewer of whatever Jimmy Fallon-hosted late-night show the Roots are the house band of; I bought 2010’s How I Got Over on a whim, loved it and put it on my Pazz & Jop ballot for that year, but didn’t bother to acquire or even hear anything after that; I once downloaded a Dice Raw mixtape and gave it a dismissive review, somewhere or other, because it bored me silly. At best, then, I am a deeply ambivalent Roots fan—one who happened upon “When the People Cheer” recently and found himself puzzling the song out.

Musically, “When the People Cheer” reminds me of Diana Ross’s immortal “Mahogany.” That’s likely down to the ascending-descending piano scales that provide the melodic grounding, granting those over-cautious drum hits, those yo-yoing chorus vocals, and those willfully lunk-headed raps a reason to exist. The pianos are so sad, you know, impossibly melancholy; they sound like watching street lights through rainy window pane must feel, but—and this is interesting—the contrasting up and down of that hook have the effect of leveling the mood enough that the listener is never fully down, but never fully up, either. Instrumentally, then, the Roots isolate you at a happy medium that’s reinforced because the pace of “Cheer” never quite shifts out of its initial mid-tempo slouch.

Of course, there are lyrics to complicate things further, the vocals frequently echoed and reverberated as if to call attention to the vastness of space in the mix. Let’s talk about the chorus first. The chorus has three facets worth examining: there’s the “wake in my boxers/with a box of Apple Jacks” facet, a compact commentary on hood life; there is the allusion to an absent God and the idea that drugs have maybe replaced God; and finally, there is the sung title of the song, as in “nobody wins, and nobody cares/they just want blood when the people cheer.” The first two ideas connect very snugly, and mesh nicely with what the music is striving to accomplish.

The last of those three ideas links more directly to the rapped verses, which are studded with X-rated puns, concerns being a dead-broke parole bedding a particular prostitute regularly. This is weak-sauce rap boilerplate, and the Roots know it, and more importantly, the Roots know that we know it. The humor—“first I feed her vodka shots/then she suck my Johnny Cochran”—is the lure in a trap, and the trap is “Cheer” itself, a song have-nots trapped in a societal rut where narcotics and sex are a welcome destruction from the trap they find themselves living in. Not to get too meta, but on some level, by co-signing “Cheer,” you affirm complicity not only with the state of affairs that the narrators describe, but that you’re totally down with the idea of allowing yourself to be entertained by this and other fictional depictions of 21st century degradation, rather than either using said time of entertainment to rise above said degradation or rescue others from it. You—myself, too—are settling for that happy medium. By all rights, then, no one should listen to “Cheer” more than maybe twice. I’m ashamed to admit that I’ve listened to it way, way more than that.