On wandering the streets of Brooklyn, New York to the tune of “I Can Hear Sweat.” 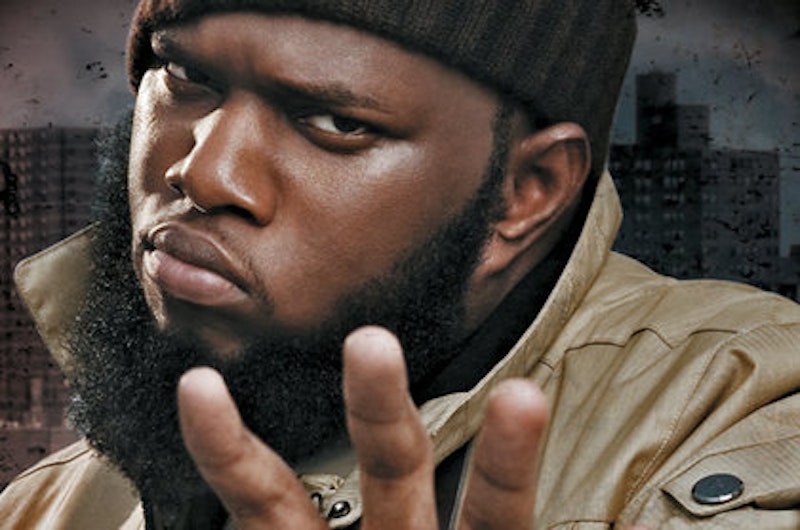 It’s certainly not uncommon to favor the Platonic ideal of a favorite rapper over that rapper’s evident, career-spanning actuality. What I want from Philadelphia’s Freeway—unfairly, probably—is for him to remain seized in time amber as “I-900-Hustler” Freeway or Philadelphia Freeway Freeway or even, fuck it, “She Makes Me Feel Alright” or “Cannon (Remix)”. Freeway: a sawed-off, neck-bearded hip-hop journeyman battling to keep the lights on every week with a sometimes desperately unhinged flow that’s the rap equivalent of Joe Pesci’s psychotic poker face in Goodfellas.

Since 2007’s lackluster Free At Last, I’ve checked in on Free only infrequently; he’s remained on his grind, cycling doggedly through any number of collaborations, labels, mixtapes, song-a-day projects, and guest spots on singles that went nowhere. Couldn’t somebody give the guy a dope beat already, I wondered, and a route to tap into and elevate those reams of brawling verses? Producer Jake One came close a few years back, but mention The Stimulus Package in any random enlightened-muso latte klatch, and it’s more likely to turn into a discussion of early Obama administration protocols than an exploration of What Went Wrong With Free’s Career.

The Broken Ankles EP dropped a few weeks back, and it’s a minor revelation: Girl Talk setting aside his long-tired omnivore’s gimmickry to erect dynamic rap-banger chasses, with a reinvigorated Freeway swinging for the fences as though he’s just signed a new lease on life. “I Can Hear Sweat,” where Free is joined by a bloodthirsty Jadakiss, is the cut I return to most. The beat is buzzy, busy, dark-alley threatening yet flashbulb bright; if Girl Talk stole to build this thing, I can’t hear it, but then again, I’m a guy who was put off by the heavy emphasis on production in this Low Pros review. Long story short: it’s a great beat, and Freeway’s gruff bluster is a great fit. Even though he’s shed that Tasmanian Devil syllable-stretch and isn’t cramming verses as tightly as he once did—he’s no longer a Young Turk, after all—Free sounds vital and, importantly alive here—and this is where I segue, however awkwardly, to Brooklyn.

Last weekend, I decamped to Brooklyn to cover the 2014 Ende Tymes Festival for the Village Voice. It was great. I met a lot of people who’d been little more than avatars online or voices on the telephone in person, bought a ton of noise cassettes, consumed a surprising amount of alcohol, and had my mind blown sonically at least a dozen times. But all of that transpired in the evenings; the days were my own, and I spent them wandering around Brooklyn.

Have you watched Looper or Blade Runner? Do you remember how wrecked and wretched their metropolises were, how ruined and blighted their neighborhoods? The way everything seemed hopeless and crushing and broken down? Brooklyn is a lot like that, minus the full dystopian monty. There are too many people, all the time, for sidewalks that would be considered wide in other cities and here are full of cops and unlicensed vendors. It’s noisy, poly-ethnic, and dotted with strangers who are vividly and loudly insane. (Crazy old lady in an Adidas jumpsuit cussing out youths in a bodega for no reason, I’ll never forget you; crazy old lady in an electric wheelchair cussing out drivers when not dementedly murdering Beyonce’s “Drunk In Love,” rock on.) Everybody is wary, and nobody really looks anybody else in the eye unless it’s past midnight and very few pedestrians are on the street and there’s a very real fear of being mugged. A Darwinian tension seethes just below the surface of everything. Given all of this—and the random bicyclists and irresponsible motorists—Brooklyn is not really a safe place to wander around wearing earbuds but, paradoxically, it’s the perfect place to wander around wearing earbuds while blasting “I Can Hear Sweat.”

Two thirds of “I Can’t Hear Sweat” is about other people’s fear. “Sweep the ratchet, make Al Sharpton call for peace,” Free snarls, among other threats, one involving Tom Sawyer. “He don’t even know that they peepin’ him through the scope/So scared, they see his heart beatin’ right through his coat,” Jadakiss sneers, before evoking the song’s title more emphatically than his host. But it’s the final third that really elevates “Sweat,” and connects it directly to Brooklyn’s blight and bustle. Most rappers spitting over a beat like this one would opt to let that beat ride, or double down on what came before, but here Girl Talk and Freeway slip us a Mickey by gear-shifting into what is almost an entirely different song. The pensive fluorescent grime of the original gives way to a soaring, stirring bursts of canned-string triumph where Freeway riffs on 2Pac’s “All Eyez On Me” and has the temerity to posit himself as a massive success, and the momentum, established by what came earlier and some of the best verses of his career her, to will this fiction into a sort of truth. Rap is full of this brand of projection—the intro to Meek Mill’s Dreams & Nightmares is the best, most recent example that springs to mind—but Free’s iteration feels determinedly earned, even if it really isn’t, the recorded embodiment of Brooklyn’s masses forever striving, striving, striving through the city’s wreckage.