On Undefeated, with a brief Q&A. 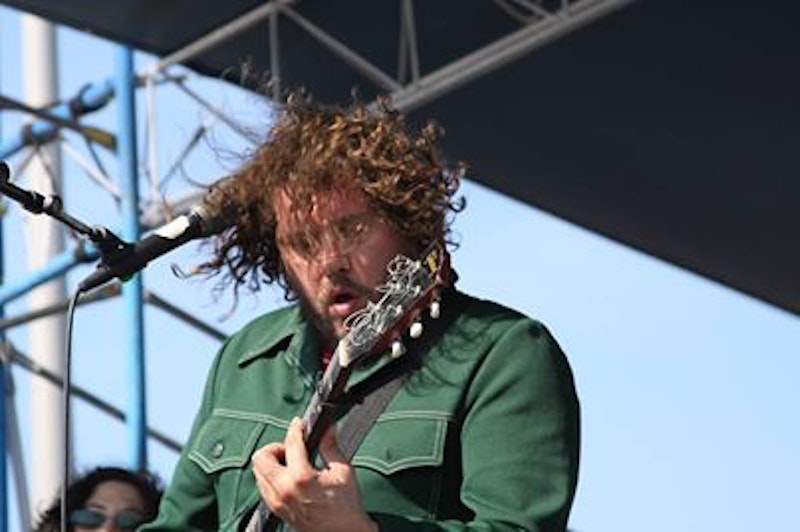 Musicians are often reduced to biographical details, easy signifiers that people understand—even if they don’t necessarily relate to the music. For Bobby Bare Jr., this means that he has to deal with unending questions about his famous country-singer father, even though Bare has never let his music be defined by his parentage. As Bare put it in email, “Just because I grew up next door to George Jones and Tammy Wynette does not mean that I am not capable of purchasing a Clash record at the shopping mall in 1982. They'll sell those things to anybody.”

Bare put out his first album more than a decade ago, and his music has always reflected a variety of interests. He “went to college in the early 80s,” so he fell for “REM, the Smiths, tones on tail, and Depeche Mode.” Although he hasn’t yet recorded a synth-heavy album in the vein of Depeche Mode, he did cover the Smiths’ “What Difference Does It Make.” (He’s also spent some time in a Pixies tribute band.) “Dig Down,” from 2002, is an angry love letter to an older group of rock stars that includes Pete Townshend and Jimi Hendrix. “Your generation used up all the feelings,” Bare sings, “and if we rock it looks like we’re ripping you off.”

The latest full-length, Undefeated (his fifth), comes after the end of a relationship. When asked how his album stacks up with other famous break-up albums—Sinatra’s In The Wee Small Hours, or Marvin Gaye’s Here, My Dear—Bare responds unequivocally: “This is not a break-up record, it’s a getting dumped record. The girl I went through a break-up with made it very clear that she did not want to hear anything more about my feelings or emotions. So the only place I had to put them was in songs…”

Bare works with a band, the Young Criminals’ Starvation League, which has no problem with his versatility. “My keyboard player [Matt Rowland] used to play the B3 organ in African-Americans Baptist churches,” Bare points out, “But he also loves Whitney Houston… Come to think of it everybody in my band really likes Whitney Houston but we all do this rock 'n’ roll thing...” While Undefeated doesn’t contain any Houston covers, it does showcase the band’s comfort playing in a number of styles. The title track has the rhythm guitars of Southern soul, while “Blame Everybody” is jaunty piano pop with horns and beautiful, high backing vocals. In “Forever Became Never Again,” the somber percussion takes on a military quality, tightly coiled, but then it lopes loosely and easily through “Don’t Wanna Know.”

Sometimes Bare is bitter—“I could have blamed everybody… but myself”—but he keeps a cool head, mostly making simple observations about the end of romance. In “If She Cared,” a pretty, shambling duet, Bare sings, “If she cared, where I was/then I wouldn’t be here with you right now.” “Forever Became Never Again” is also bluntly self-explanatory. “My Baby Took My Baby Away,” about having a son and then losing your wife’s attention to the baby, moves between humor and sadness. Bare’s son and nemesis “comes stumblin’ through the door with his bottle in hand” and “makes a mess of everything;” he’s like an unemployed drunk. But Bare, addressing his wife, also knows the baby has “never told you a lie” and “never made you sad enough to cry.”

The singer “hope[s] those songs get played on the radio loudly.” Sadly that seems unlikely. Despite his pedigree, which makes him a natural candidate for the made-up category that is “alt country,” indie-leaning outlets don’t cover him much. NPR paid the most attention when Bare worked with his dad to put together a tribute album for Shel Silverstein. Still, Bare keeps going. As he sings cheerfully in “Big Time,” “You’re gonna miss me when I hit the big time.”

Bare answered a few of my questions:

SPLICE TODAY: You grew up in country music, but what are some of your influences outside of country music? Do you listen to contemporary country?

BOBBY BARE JR.: Contemporary country is just doing the exact same thing that Patsy Cline did in the 50s and 60s. They are trying to cross over to pop. I don't think less of them for it; I just don't listen to the music. Many of them don't either.

ST: You were doing a solo house tour for a while. What’s it like to get back in the studio with a full band after that?

ST: Does performing in such an intimate environment a foot from your audience change the way you think about songs or songwriting?

BB: House parties are so intimate it's uncomfortable for everyone. But it's also more effective than any other performance. There is no wall between the audience and me, so I can walk up behind them, I can sit next to them, I can do circles around them and draw them in a totally different way than when I am anchored to a microphone.