Even if they’re an “ex-buzz band,” of Montreal still opens up the earth. 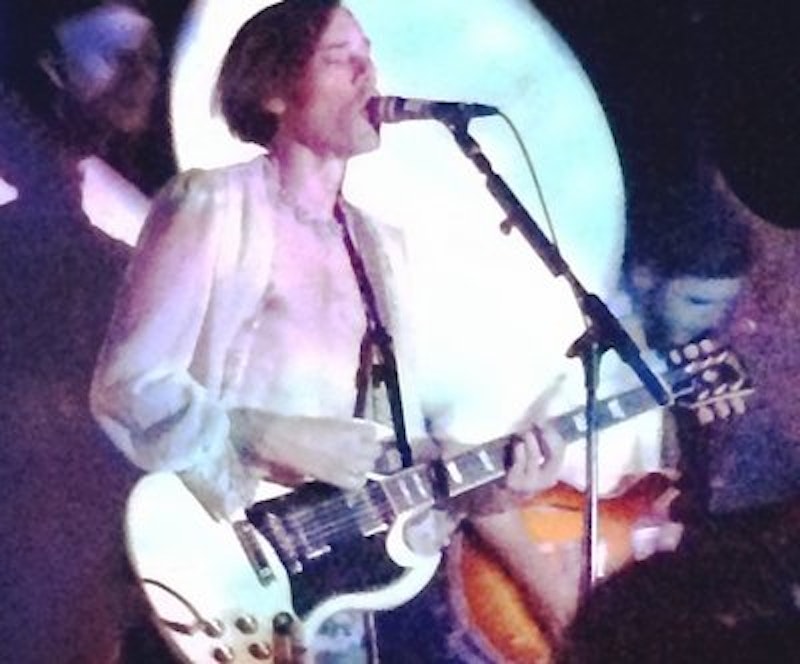 Nolen Strals has a great interview with Titus Andronicus frontman Patrick Stickles in this week’s City Paper. Stickles seethes with bitterness and righteous indignation describing how so-called aspiring “indie” bands have been spayed and jaded by the commercial cannibalization of “indie rock” that makes them say things like “I’m in a lesser-than bracket. I don’t have the status of the Next-Level Indie Band.” Hacks and chumps that act like professional rock stars, don’t give a shit about their fans, and have nothing to say and nobody to excite. Inoffensive anonymous schmindie wilters who leap for shark lawyers rather than cultivating something real out of yourself and your community.

Stickles observes, “They don’t care who gets stepped on. It could be the dude who recorded their first album who grew up with them and now they’re like [in a cavalier businessman voice], I gotta go work with this big-name producer if I wanna get to the Next Level. We’re really hoping for a Top 40 debut this time. It’s just business, right?” Bands that were lucky enough to be established in the 1990s and the early aughts had cachet in the Millennial Music Wild West, but besides being affected by the money drying up and going elsewhere (festivals, commercials, television and movies), the ever-increasing velocity of the news cycle fragments everyone’s audience.

“Buzz bands” of the Internet age have a moment that lasts anywhere from a couple of weeks to a couple of years before the eager tide crests and they’re yesterday’s news. I’m perplexed by people hearing a song and saying, “Really? That’s so 2005.” Music you connect with doesn’t age. Worrying about listening to something that was cool years ago and isn’t talked about anymore is insane. You might like some records less than others, and every band changes over time, but to dismiss or disqualify something because the common spin says it “peaked” three, four, five or six years ago, that doesn’t invalidate the band or their best work. Stickles ends by saying his band is “an ex-buzz band, we’re a recovering buzz band.” One lukewarm Pitchfork review will send you back to clubs from the theaters and festivals. Some of those rando buzz bands of yore deserved it, but that thoughtless, automatic dismissal affects lifer bands like ...And You Will Know Us By the Trail of Dead, No Age, Interpol, and most unfairly, of Montreal.

Kevin Barnes’ carnival of psycho-sexuality, luscious funk, and pop rock brilliance struck gold with 2007’s Hissing Fauna, Are You the Destroyer?, a masterpiece and instant classic whose success validated and vindicated Barnes’ equally amazing work from the preceding decade, when he was basically ignored for years and swore he’d quit making music if 2004’s Satanic Panic in the Attic fell on deaf ears. It didn’t; that’s the first in a string of brilliant albums: 2005’s The Sunlandic Twins, the aforementioned Hissing Fauna, and Barnes’ White Album, 2008’s Skeletal Lamping, a manic and emetic spew of ideas, styles, sounds, and personas. It feels... open, like opening someone’s rib cage.

I slept on 2010’s False Priest—there was still so much to digest with the older stuff. 2012’s Paralytic Stalks is where the tide crested, and Barnes got put down in a negative Pitchfork review for being too dour and “self-indulgent” (stupid phrase) and too kitchen-sink, as if those weren’t part of his M.O. for the past five years. Bands make records that aren’t as good as their others, but that doesn’t mean their time is up, or that they should be shoved aside to make room for the pop-punk band from Brooklyn with a Nickelodeon reference in their name.

of Montreal have played smaller and smaller venues every time they’ve been to Baltimore since 2007. First the gorgeous and enormous 2640 Church in the fall of that year (with Grizzly Bear), then the Sonar (capacity ~1,000, and sadly no longer with us) twice, then the Recher in Towson (~750, and now a dance club called the Torrent Lounge), and last weekend, the Ottobar (capacity ~350, and always there for you). I’m really happy I got to see Barnes and his crew in such a great, small club, but they should be playing bigger places. They should be where the Flaming Lips are. Their last LP Lousy with Sylvianbriar got lukewarm notices too and slipped by too many people, it’s solid. I was floored by their performance; it was electrifying. I was on another plane, sober as a whistle and high as a kite on this glorious music. Barnes has the most stage presence of any performer in his, uh...”bracket,” you know what I’m saying? Bland business and musical life cycles of the 20-teens can only keep a band this great down so much.

Barnes and his band (entirely new, though I couldn’t have cared less since I’d never seen the beloved 06-13 lineup and Barnes records everything himself on the albums) are consummate professionals in delivering their ecstatic revue: half new stuff, half Hissing Fauna, with about a dozen really choice songs from Satanic Panic and Sunlandic Twins (especially “Disconnect the Dots” and “The Party’s Crashing Us). Barnes hasn’t aged a day in two decades, and I was star-struck. His voice is in great shape and his pitch is superb for such winding and dense songs. of Montreal’s music has the orgasmic primary color method of E.L.O., but that’s just their power pop.

Songs like “Faberge Falls for Shuggie,” “Gronlandic Edit,” and “St. Exquisite’s Confessions” are as funky and dirty as Prince. Barnes is also perhaps the most underrated and easily quotable lyricist in all of indie rock (“Those with the golden axe have TRIED TO TELL ME!!!”). The writhing, grinding, blissed-out crowd had every word and hilarious turn of phrase from Hissing Fauna memorized, and I was over the moon singing along with a capacity crowd to the hits, completely unforced and going hoarse. There were some of the costumes and theatrics the band’s known for, but it was scaled back for a smaller stage, to the music’s benefit. New tunes, retro rockers like “Triumph of Disintegration” and “Girl Named Hello” sat comfortably alongside red letters “Suffer for Fashion,” “Bunny Ain’t No Kind of Rider,” and “She’s a Rejecter.” For such an enormous set-up and complex arrangements, every layer of those records was clear and perfectly in its place in the mix. What a rarity! of Montreal opened the earth up at the Ottobar, and when I lost my voice shouting “ONE MORE SONG!” in unison with everyone else, I felt like I was 13 again. It was a kinetic energy and devotion that you can’t buy or hype. They closed with a ferocious take on “The Past is a Grotesque Animal,” leaving the place devastated, but not weak: this is the way rock concerts should be—invigorating and imbuing a lust for life in the impotent. They may be an ex-buzz band, but of Montreal is more magical than ever.