It's All Rhythm and Voice

An interview with Marian Hill. 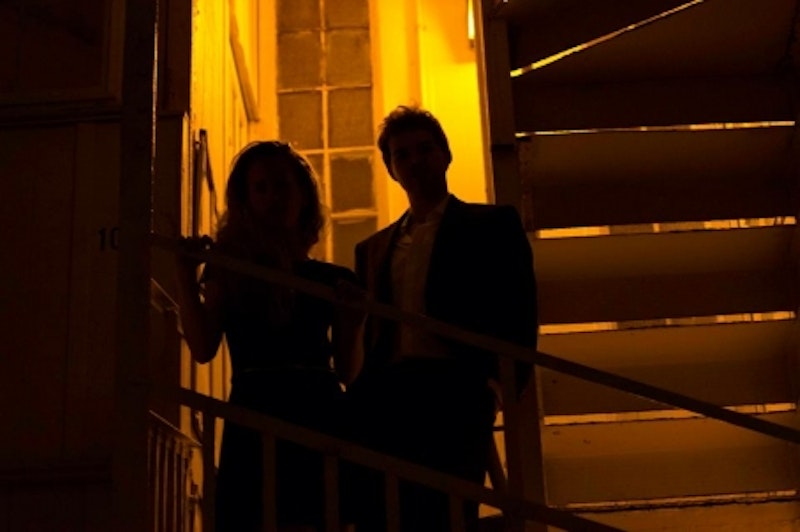 Jeremy Lloyd and Samantha Gongol, the two members of the group Marian Hill, went to the same middle school. Lloyd was listening to “Nelly, Eminem, Dr. Dre, underground stuff,” including the Minneapolis rap group Atmosphere, “and some Blink-182 for good measure.” In contrast, Gongol was into “all things pop," plus Norah Jones. They were able to overcome their early musical incompatibility, and the duo's middle-school favorites have little influence on the music they make now. Their recently released EP, Play, swaggers and sidles simultaneously, taking what it wants from various sources and leaving the rest behind.

Marian Hill focuses mainly on rhythm and voice: most of the songs on Play start with just a beat and singing. The music is carefully layered, so new elements show up—rounds of samples, a couple of versions of Gongol’s vocals, additional drum sounds—at precise moments. Traditional instruments like guitars and keyboards are mostly absent (except for a horn on one track); the source of the melody is often hard to identify. Other artists like Jessy Lanza or Kelela exist in this space, but they maintain links to classic R&B singing, channeling Janet Jackson or Aaliyah in their vocal delivery. Gongol tends to drift free of that, enjoying a more idiosyncratic style.

To construct their songs, Lloyd and Gongol start “with the skeleton of a beat,” then “get in a room together and write the melody and lyrics.” “I love the sharpness of the right kind of snap,” Lloyd notes. He also favors “having the kick and snare be at opposite ends of the spectrum, existing in totally different sonic strata—having a deep, subterranean kick and a high, crisp snare.” The song “Play” has a thundering beat that wouldn’t be out of place on the second Clipse album. That was produced by Pharrell and the Neptunes, who shared a similar fondness for big holes in the middle of songs, making everything hit with more force. Lloyd and Gongol pointed out that they’ve been listening to a lot of Drake lately, and while he sounds very different from Clipse, the Toronto rapper also relishes the contrast between the subterranean and the high.

Gongol’s singing roams the open spaces between these percussive extremes. In addition to studying Drake, she’s been “rediscovering a lot of jazz greats, particularly Dinah Washington,” and listening to some belters: Sam Smith, whose highly anticipated debut album comes out May 26, and Sia, a New Zealander who maintains a solo career when not writing hits for Rihanna and Beyonce. Gongol’s a twisty, elusive singer; she likes to get to a high note and then make unexpected runs in either direction.

In several songs, she explores the gap between reality and belief in relationships. In “Play,” she contrasts boys and men: “boys, they always have their toys/they’re making all the noise;” while “men, have money left to spend/and lots of family friends/they’ve learned how to pretend/they’re having fun.” The hook, “you wanna play me baby,” insists on ambiguity. Is this play fun or manipulative, sincere or pretend? On “Lovit,” which swings with tension, she comes back to this concept. “I like the way you play boy/tell me why you play boy/does it make you feel/like nothing else is real?” And “Whisky” thrives off the same sort of child-adult mismatch, as Gongol sings, “I like the whisky with my nursery rhymes.”

In addition to Play, the Marian Hill remix of Zella Day’s “Sweet Ophelia” has been very popular on the blog aggregator Hype Machine. Day’s original smashes and shouts; Lloyd chopped it up into a glitchy and stuttering onslaught. While Lloyd is “definitely interested in doing some more remixes down the line,” he’s “a songwriter first and foremost so that will still take precedent.” “Right now,” the group notes, “we are trying to write as much as possible, pushing ourselves to keep discovering our sound and seeing where it takes us. We don't want to put too many constraints on the project until we see what we're working with.” Bring on the whiskey and the nursery rhymes.

SPLICE TODAY: When did you start making music together?

MARIAN HILL: We grew up together and have been writing together on and off since college.

MH: Every song is a different animal, but generally it begins with the skeleton of a beat and then the two of us get in a room together and write the melody and lyrics.

ST: You guys use a lot of different percussion, like finger-snapping. What interests you about those more unconventional drum sounds?

JEREMY LLOYD: I love the sharpness of the right kind of snap. But it's less about doing what's unconventional than it is about building the drum track that best suits the song we're writing, the vibe we're creating. I'm very into having the kick and snare be at opposite ends of the spectrum, existing in totally different sonic strata—having a deep, subterranean kick and a high, crisp snare.

ST: What are you listening to right now?

SAMANTHA GONGOL: I'm rediscovering a lot of jazz greats, particularly Dinah Washington. Sam Smith, Sia, also a fan of Drake—to which I credit Jeremy for showing me just how awesome his catalog really is.

ST: Are you working on a full-length? Is it going to be more like the EP, or are you planning to try some new things?

MH: Right now we're just trying to write as much as possible, pushing ourselves to keep discovering our sound and seeing where it takes us. We don't want to put too many constraints on the project until we see what we're working with, but we are thinking about the big picture

ST: Your Zella Day remix has gotten a lot of attention on places like Hype Machine. How did you decide to remix that song? Are you interested in doing more remixes?

JL: Zella's people reached out to us about doing a remix, and I'd been thinking in the back of my mind, "Hmm, it might be cool to do a remix sometime" but it was nothing more specific than that. And then I heard Zella's song and just immediately got excited about possibilities. I'm definitely interested in doing some more remixes down the line, but I'm a songwriter first and foremost so that will still take precedent.

SG: Flattered if people think I also have some producing capabilities, but sadly they have not yet manifested. Credit where it's due—this was all Lloyd.