The Reinvention of The Strokes

Is Comedown Machine their much-needed comeback? 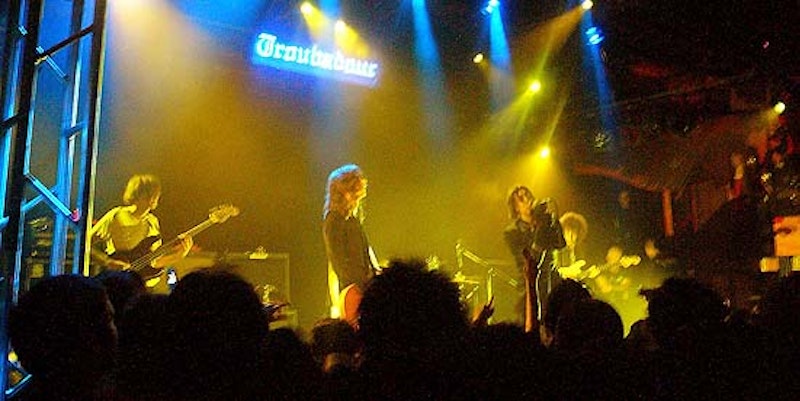 The Strokes have long needed a comeback record. More than any other band of the early 00s, The Strokes have been seen as living in the shadow of their debut. Whereas Is This It long ago entered classic record status, their three subsequent records have all suffered from varying degrees of musical compromise. While their fourth record, Angles, saw singer Julian Casablancas adjusting to his decreased role as principal songwriter, his transformation is complete on new release Comedown Machine.

It's not a bad thing to hear a lead track from The Strokes and think that it's been penned by another band. "Tap Out" nearly cops the chord progression from Gloria Estefan's " Rhythm is Gonna Get You." Like some of their better recent work though, the effect is temporary; the chorus features a slightly vocoded Casablancas flowing neatly over a laid back Italo-disco beat. "Welcome to Japan" is shameless disco. Bassist Nikolai Fraiture sounds more like Dave Allen (of Gang of Four fame), pounding out slick octave jumps over angular guitar chords. Throughout Comedown Machine the band seems focused on presenting an optimistic descent. "Chances" sweetly romances this notion.

While the guitars have always been an instant draw to classic Strokes songs, the true show stealer has always been Casablancas vocals. If anything, he sounds better the less coherent he is. Comedown Machine is a return to basics in that regard. "50/50" handily recalls the earliest whisky-soaked Strokes demos. Clocking in at two minutes, Casablancas screams into a distorted mic, the band chugging along relentlessly with 16th-note aplomb. Aside from any punk connotations the track feels a bit like Casablancas channeling his inner metal god, leather gloved hand raised high in praise of the night. "Partners in Crime" occupies a much different end of the spectrum. The melody feels positively French pop, a-la Stereolab, that is until the chorus. Each new part of the song seems to purposefully feature different instrumental parts from their debut single "Last Night," right down to the drum and bass breaks.

The strangest territory on Comedown Machine is devoid of obvious references. Lead single "One Way Trigger" is sung by Casablancas, known primarily for his rich baritone, entirely in the upper registers. Guitarists Albert Hammond Jr. and Nick Valensi trade Strokesian guitar lines over a cheerful beat and indecipherable lyrics. It's a bizarre choice as a single given that the album has much safer material on it. However, it is an optimistic move, signaling perhaps a now older Strokes opening themselves up to a change in musical direction.