Brian Eno and How I Failed to Grow Up 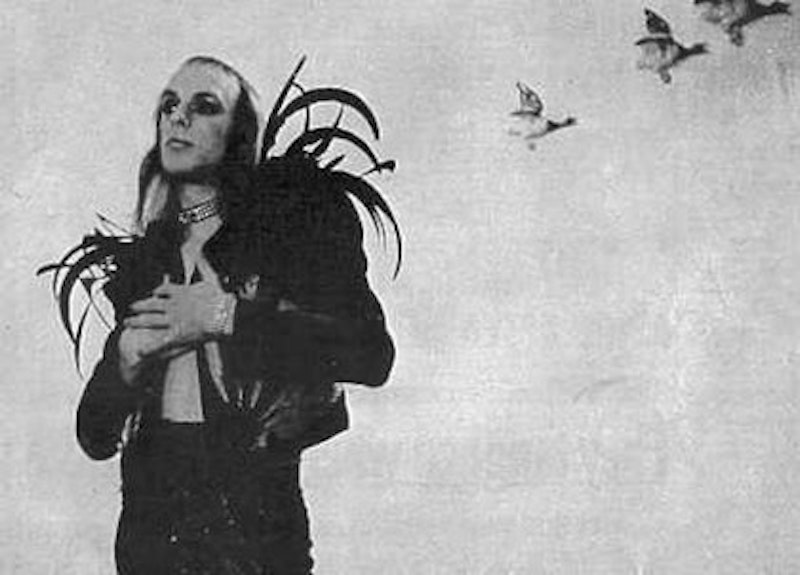 When I was a boy, I was such a snob. A snob is either very satisfied or scared, and I was scared. I knew few people. I couldn't see a way ahead to become an adult. I stayed in my room, and at college I read magazines in the library. I was stymied by everything and wondered why I had been thrown into this soup. But the soup was just high school and college life, the late teens and early 20s. Standard stuff. Even so, I couldn't cope.

So the above is a long apology for something very small. When I was 18, 19, 20, I tried to be avant-garde. In a small way, true, so the damage was limited. But my life was small. My gesture at being avant-garde strikes me the way my seventh-grade math teacher's signature (“Lance”) struck me, namely as a shrunken attempt at something grand.

I wanted to like the works of Brian Eno and his associates. As I remember it, they issued record albums with chaste, slim typography posed against light pools of indistinct color, or uncomfortably flat landscapes topped by slabs of more color, also indistinct. After the Heat was one of the albums, and I just managed to like it. That was my toehold. I also managed… well. Not Music for Airports. But one with a black cover and purple burrs of light retreating into the distance… maybe. I don't want to go back and look. Now I find the whole thing too embarrassing. Remember, that's not because it's a big deal. It's the smallness that really makes the embarrassment sink in.

I wanted to be clever. Being smart was the only card I had. I knew nothing practical, and I froze up around nine out of the 10 people I met. I was a cluck. People thought I came from a minor prep school.

Taking Tiger Mountain by Strategy was a drag, and that was one of his pop albums; normally I liked pop, as I had to admit to myself. Before and After Science was good, and only some of it was pop. It had ambient stretches, and I liked those. Therefore, I was ready for albums of ambient music. But, as mentioned, I turned out to be ready for just a few of them. My ear stayed lazy. I needed the music to start moving itself about or I couldn't stay interested. And I needed the music to end fairly fast and make room for different music also moving itself about. I had a child's ear.

I reflected on how I'd been when starting out in high school, how I could sit through playings of my father's classical records over and over, side followed by side: Beethoven's Seventh, Brahms' Third. Yes, I was a snob about listening to those records, and now I had to look down on myself because, in college, I had declined. I listened to rock instead of classical, and it seemed like pretty soon I'd be listening to pop.

I wondered about the self-assurance needed to appreciate Becalmed Mirrors, no. 2 by Eno and Valerus, or Heat Music: Crystal Volume Reverses, by Eno and the beautiful Genta Andreusz. At my college there was a flock of tall, self-assured boys from top backgrounds who wore long coats in winter and could be seen with albums under their arms. Guess which albums.

Back home, at some point, I hotly challenged my brother to tell me one way ambient music differed from Muzak. This was apropos of nothing, and he became rather sniffy in his response.

I took a year off from college. In the fall of that year, I decided I liked pop. For good reasons, I told myself, and then listed them inside my head. I won't go into what they were, because the hell with it. But in this one corner of my life, music preferences, I felt that I had achieved order.

I forgot about Left-Handed Music, vol. 3 and Between Rock and Sky on Thursday Afternoon. I didn't worry about tapes of French Guyanese hand-drums and why they didn't fascinate me the way they fascinated Eno in front of his mixing console. I forgot about lying in bed with my headphones and listening to Discreet Music and feeling like this night was a step forward because it was the night that I liked my second album of ambient music. I forgot that trick I played on myself, the false progress. I should have remembered that bit and taken a look at this idea: how much of life can really be addressed by lying alone someplace and fidgeting with your mental outlook? I never asked the question, so I didn't learn as much from my Eno period as I might have. I thought I was growing up. Maybe I was, but just barely. I was still in trouble.