Now if only they could get the mix right. 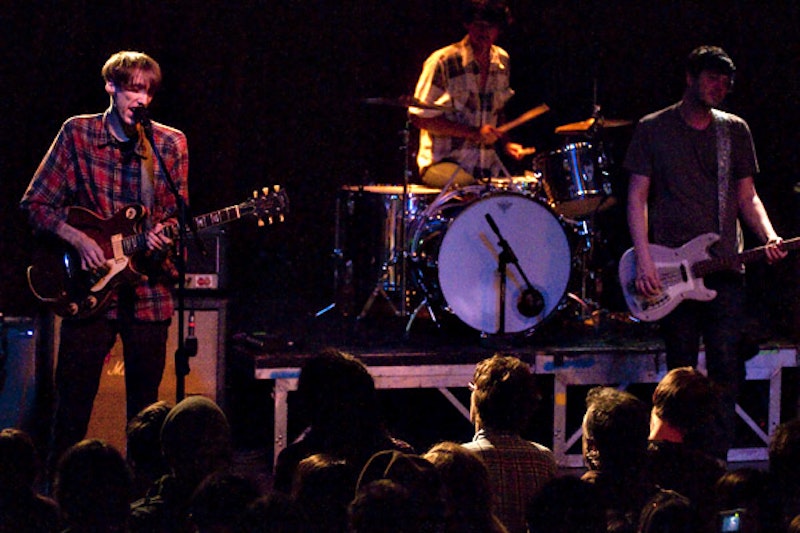 The only time I saw Deerhunter was in Baltimore at the now-defunct Sonar, on a triple Round Robin-style bill with Dan Deacon and No Age. The three of them opened the show with a heinously loud drone, riding a wave of sustained feedback and hemorrhaging layers of delay into abandon. The whole club was filled with this honky, hollow body of sound, as if every sound and dimension of the drone was wrapped and shielded in wool, blanketed and obscured by a crummy mix and a haze of delay. Death to reverb. You can watch for yourself here, as Deerhunter segue into a killer version of 2007’s “Cryptograms.” The fog clears, and bandleader/enfant terrible Bradford Cox’s considerable songwriting is able to shine, and he’s keen to bask in the glory of a capacity crowd, pogo-ing in unison.

I never got completely behind any of Deerhunter’s records because they sound so messy. Melodies, hooks, and details that would otherwise make the song are buried in a claustrophobic mix or mutilated by too much delay and feedback, leaving something that is loud, yes, but lacks precision, and hits like a pool toy. The stand-out moments are obvious: the aforementioned “Cryptograms,” ”Nothing Ever Happened", and especially ”Agoraphobia”, a haunting and transcendent song about being a shut-in, longing for connection and experience but being too afraid to try anything at all (which borrows from The Smiths). Cox is a serious muso/rock historian, and nothing if not interesting—the petulant teenager bit ain’t schtick, but he’s probably mellowed out in the six years (!) since his band has been recognized.

Deerhunter’s new LP, Monomania, is out May 7, and the title track is one of the best things they’ve ever done, a volcanic rock song that just barely manages not to fall into the jaws of its own noise. Cox’s voice, always sounding like a different person from song to song, is delivered with scratchy distortion and modulated by a slight chorus effect, getting somewhere close to an alien Chrissie Hynde circa Pretenders I. Lockett Pundt’s guitar work is still dense and monolithic, a dozen different brief guitar lines that wouldn’t hold on their own colliding in this huge attack sound. Here, instead of falling in on the chaos or hiding inside the metal shells of their sound processors, Cox and the band summon an incredible climax that continues to rise and swell long after the song’s pre-school sing-along hook “MONO MONO MANIA” has cycled 40 times. They still sound too shrill though—for whatever reason, the crash cymbals, which eat up a ton of room in the frequency spectrum, cut through the gorgeous guitar playing and make the bass sound lobotomized. And forget about the live show: they are great, but the songs are obliterated and almost unrecognizable. But the band is well on its way, and Cox’s uncompromised rock star moves aren’t pompous, they’re moves to entertain, to be larger than life and conquer his physical and emotional problems. They’re an enormously compelling band in theory, and I might be smart to wade through the noise a little bit more. Here’s a riveting performance of “Monomania” from tastemaker Jimmy Fallon’s show.