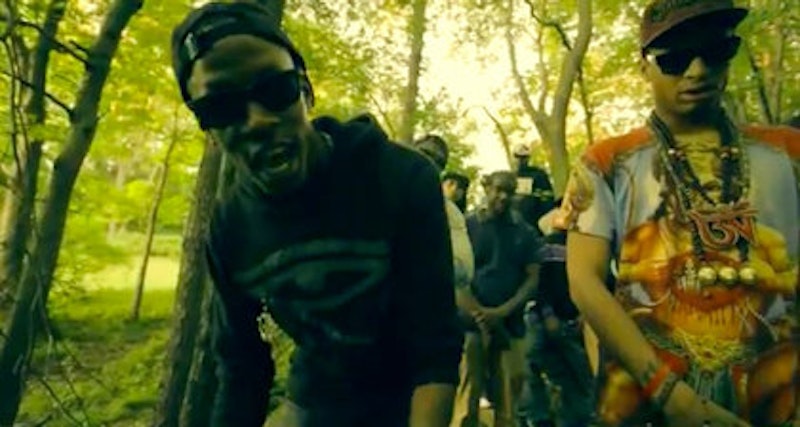 Three fun facts about Brooklyn rap duo Underachievers (pictured): 1) they are overly generous with the phrase "third eye"; 2) if they had a "W" word at the tail end of their name, it would be reasonable to abbreviate it as "UAW," as in "United Auto Workers"; and 3) the cover art for Indigoism, their recent mixtape, might be the first I've encountered where the artists on the cover are cracking up over the world beyond the album cover, even though the world within the album cover is patently Illuminati-conspiracy theorizing batshit ugly. "So Devilish" is the cut, out of 19 or so options that I find myself returning to most often, probably because it's a theological deconstruction rap banger I could justifiably play in the car with mom, and we'd get an interesting conversation out of the experience.

The production is glancing guitar licks at the speakeasy at three a.m., smoke of various provences permeating everything, and is kept advancing in a way that combines apposite sensations: that it could to succumb to an undertow at any moment, and that it could defy flood-zone causality and submerge every house on the block, in languid succession, forever. Against this backdrop, rappers Issa Dask and Ak get positively Introduction To Comparative Religions Senior Seminar on unnamed sucker MCs who, presumably, have not yet bathed in the blood of the lamb but maybe own the second season of Martin on DVD. This is not the future of chart-rap—in the real world, "burnt from the Sun, you are all God's, too/but I'm on a higher level, I am you times two" can't compete with conspicuous-consumption brags—but there's something subversively thrilling here, nonetheless, from a post-Ab-Soul perspective.

Junip, "Your Life, Your Call"

"Your Life, Your Call" takes root in a garden bed of shakers, micro percussion, ballooning synthesizers, and a buoyant guitar with a spring in its step. Now this is the perfect tonic for wandering through downtowns at mid-day in early spring, its elements fused comfortably into a gelatinous chugga-chugga chk chk. I don't mind the singer; he's hardly a perfect complement to the music, but nothing close to a deal breaker. If only this song wasn't pitched as a tough-luck pep talk to a just-dumped bro; it's not a good look. If somebody kicked me to the curb, I don't know that I'd want my pal to serenade me; masculine etiquette (U.S. edition) demands that the friend of the injured party sit nearby, offering silent empathy and settling up the overall bar tab without a hassle. Then again, I'm not sure that this song even need vocals: it's just so gorgeous and well-proportioned that singing anything over it is an insult, an injustice, a fool's errand. Call me when an instrumental's making the rounds.

The best Sightings songs are essentially at war with themselves: think of each contributing cog as a half-in-the bag bar-brawl combatant. On most of Terribly Well, these contributing cogs—Richard Hoffman's loping bass, Jon Lockie's lock-stepping drums, Mark Morgan's squalling guitars and ranting vocalisms, guest keyboardist Pat Murano's textures—are effectively shadowboxing, so that while passersby might come away thinking they sidestepped a scene of unimaginable violence, the reality is something more theatrical.

"Better Fastened" puts me in mind of a wounded Transformer attempting to scale one of the Swiss Alps in the dead of winter: the crunch of huge metal hands clawing at rock and snow, the relentless whistling of a winter gale, sensors fritzing painfully and shorting out, some stoned dickhead perched in a helicopter hovering nearby camcordering the scene and narrating at the same time. The dissonance evoked is classic Sightings, this almost narcotic rush of utter and complete maniacal wrongness that whirlwinds at the slightest remove.

You don't want to retreat, because there's a Greek Siren allure about the unit's self-swallowing noise, but you know better to advance, because there's a very real chance that you won't emerge unscathed. It's a tough balancing act.