The Perfection of "Formation"

There’s so much black queerness splashed all up in it. 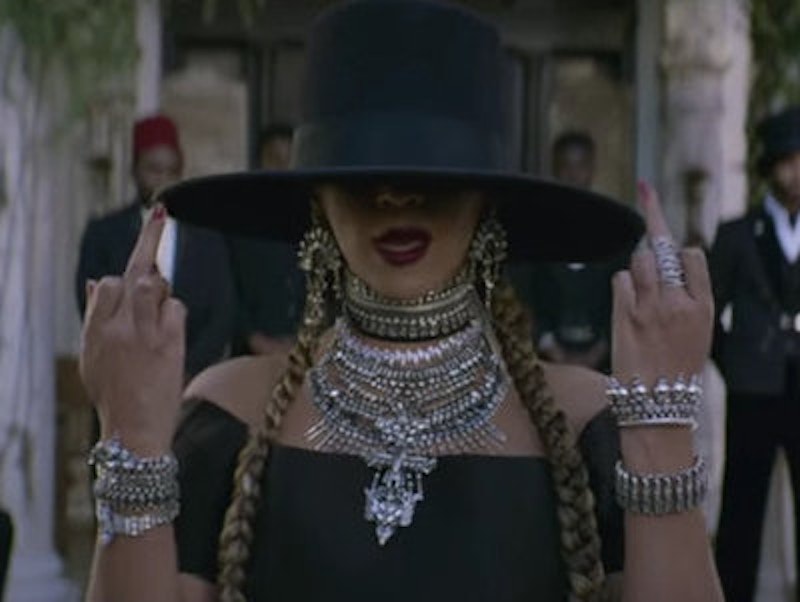 Girl, this most recent Beyoncé slay has me cackling. I haven’t been able to stop watching "Formation" since it dropped, meaning I’ve probably seen it 600 times already. I usually like what Beyoncé does, but “Formation” really feels like a watershed.

One of the hardest things about being a stern, unflappable Beyoncé fag for over 15 years is that she’s never really done anything specific about her gay fan base, to say nothing of her black gay fan base, which gives her awesome words and catchphrases to use like “slay” and “twirl." People will talk about the unabashed blackness of “Formation,” about how it dropped in Black History Month and about how it celebrates black beauty, black power and black excellence. And it does. But what really has me gasping for breath is that there’s so much black queerness splashed all up in it, too.

“Bitch I’m back, by popular demand,” one of the sickening opening lines of the whole track, is sampled from the famous gay New Orleans bounce rapper and YouTube sensation Messy Mya, who was murdered in 2010. You can hear the original “bitch I’m back” here at 4:09. It says a lot that Beyoncé opened her track with a black New Orleans queen.

And just when you thought the track wouldn’t get gayer here come NOLA bounce legend Big Freedia who screams, in her iconic way, “I did not come to play with you hoes!! I came to slay, bitch!!” It does not get much black-gayer than this, sorry white queens! Big Freedia's queer voice offers a familiar pattern of speech, a tone of voice, and a reference that many black gay men will connect to and recognize instantly, particularly if you’ve ever been to a vogue ball.

“First of all Beyoncé is out here becoming a black gay man,” one of my friends wrote about the video on Facebook, “and I don’t really care if you’re not on board.”

“Formation” is a very, very black video. Like epically black, almost as black as that time Obama got mad at “folks who wanna pop off” which, until Beyoncé twirled in, was the blackest thing to happen in America in the 21st century. But Beyoncé has actually long been a black production. She’s paying homage to her Southern, Creole roots. But this isn’t even the first time Beyoncé has drawn on her roots. Six years ago, in “Déja Vu,” Bey already did that by dancing in the sand, sweating, and playing the role of the light skinned southern belle who stays indoors.

One thing is clear: Beyoncé loves black women. Even in the video for Yoncé, from her last record, she worked with Chanel Iman, Joan Smalls and Jourdan Dunn, the three major top black models working the runways. It was as if the message was, “If the fashion industry won’t book black models or showcase black feminine beauty, I will.” This time, on “Formation,” Beyoncé cranks the volume on ethnic beauty all the way up. Not only are all the dancers black, with natural hair, and not only is Blue Ivy’s hair in an afro, a clap back to that tired ass online petition started back in 2014 to “Comb Blue Ivy’s Hair,” and not only does Bey like her negro nose with Jackson 5 nostrils—another clap back at all the times she’s been airbrushed in beauty campaigns—do notice that the only white people in the video are militarized police officers. They’re given zero airtime and instead of being featured they surrender to the dancing black kid in a hoodie. STOP SHOOTING US.

I’d have loved to see the casting call for that role: white guys needed for music video. No lines.

My favorite moment in the video is the image of Beyoncé standing on the porch with black men, everyone dressed in black. She completely slays her look. What kind of hat is that, wow! Look at how her neck is dripping in diamonds! As a whole it's an extremely powerful image, and there are really two things to notice about it. On the one hand, it’s an image of mourning. The people standing there on that porch, motionless, are mourning the lives of black men who’ve been killed arbitrarily by racially motivated police violence. “Formation” is about police brutality, black power and black excellence, with anti-black violence just one thing that gets between black power and black excellence. How can a young kid know if he’s a young black Bill Gates in the making, as the song says, if he’s shot dead before anyone can find out? Even though it’s a mourning scene she’s also surrounded by strong black men, DARK black men, mourning and celebrating community all at once.

It’ll be interesting to see what the inevitable surprise album she's going to drop any second now will be like. Will Beyoncé's slayage continue to be political? What's next?