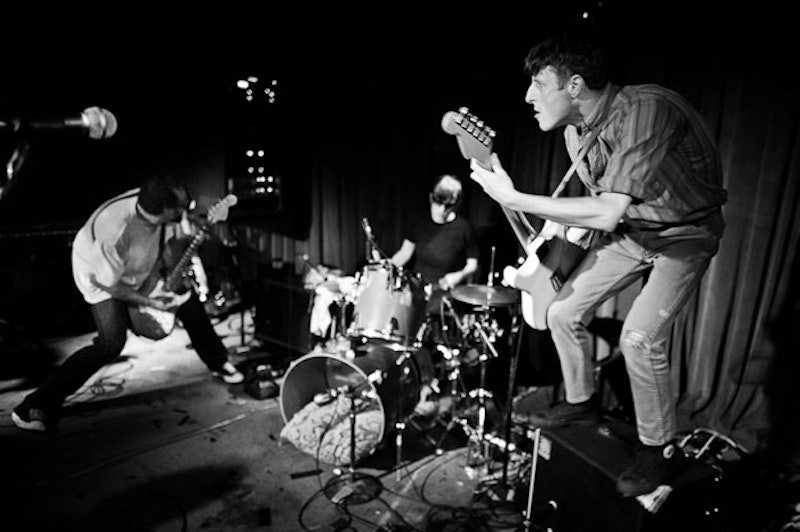 Like white flight or the extinction of a wild animal, the decline of rock ‘n’ roll was slow and agonizing. Once the unrestrained sound of youth gone wild, this music has spent the last four decades turning into the background noise of TV advertisements and nostalgia. Rock 'n' roll is now the sound of familiarity and security, of giving up and settling down, of eating a bowl of mac and cheese while waging a "perilous" bidding war on eBay, presumably over some rare rock 'n' roll ephemera only affordable thanks to the disposable income rewarded to those who'll blindly accept a subservient role as a cog in the capitalist machine. Yes, rock today seems more like a smoldering ember than a great ball of fire, and luckily the Detroit, MI punk band The Gories will never give a shit about that.

Mick Collins, Dan Kroha, and Peg O'Neil formed the group after being inspired by Crypt Records' landmark "Back From The Grave" series of 60s punk collections. Early electric blues, 50's r 'n' b, teen garage rock, and gospel informed the trio's work, making them one of the few non-60s punk acts to maintain a direct connection to rock's African American origins while staying true to some of the more unconventional elements of punk. I was barely a teenager when I discovered The Gories via college radio just as alt-rock began its rise to prominence, so, compared to the predictability of Guns 'N' Roses, MTV, and grunge, initially their music was a mind boggling thunderclap. As I dragged the dead weight of my teenage insecurity through the halls of high school, having The Gories blast through my headphones seemed almost like a revolutionary act. Little did I know that in the future their thunderous power would be synonymous with a very different sort of catharsis.

A few weeks ago I saw The Gories perform live at the Unregistered Nurse Festival at The Ottobar in Baltimore. While plenty of the newer bands held their own, the Detroit veterans' bombastic set of old favorites was the crowning moment here—a scalding eruption of The Gories' electrifying stage show and the audience's mosh-crazed exultation. U.N. Fest's rowdy attendees represented a vast spectrum of music fans, but, despite being an all-ages concert, there were two very under represented demographics: teenagers and younger college students. This wasn't too surprising since some young music fans view rock as an antecedent to the streamlined euphoria of the modern electro pop dominating many of their party music playlists. Though younger folks can understand and appreciate rock, when compared to the dense sonic rush of electronic artists like Ke$ha or Animal Collective, The Gories' garage minimalism comes off as an esoteric meditation on times gone by and certainly not the soundtrack to a wild night on the town.

The Grateful Dead, The Band, The Allman Brothers, and other hippy rock groups transposed the sounds of Appalachian music, folk blues, and other pre-WWII idioms with modal jazz, experimental music, and blues-rock to echo the dramatic tug of war between past and present that was so inescapable in the late-60s. Resplendent with the same kind of bold symbolism, The Gories' brutal music thrives today as a monument to rock's deformed legacy in the post-post-modern world.