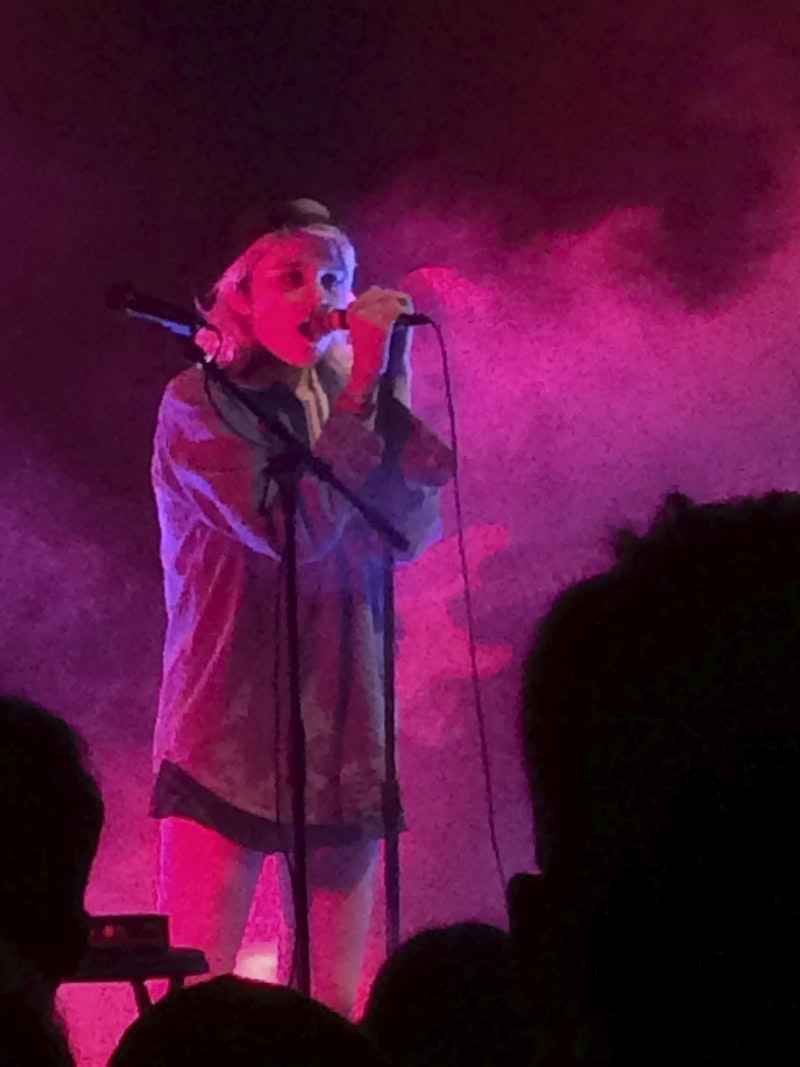 When I saw Sky Ferreira open for Vampire Weekend and Solange in September, she was a different person. Just days before that show at the massive Barclays Center in Brooklyn, Ferreira and her boyfriend were busted upstate with a load of hard drugs, and her fantastic debut LP Night Time, My Time hadn’t even been announced yet. That night, I was expecting lots of chatter, oohs and aahs and gross armchair commentary like, “I wonder what’s going up her nose right now.” Instead the arena was mostly empty—except for about 200 very young and enthusiastic girls and boys, shouting, “We love you Sky!” at every opportunity. Ferreira and her band played mostly new songs from a record that was still in major label limbo, and at a crappy angle from an airplane view, it flew by me, and most everyone who got there early. My most vivid memory was how strong her voice was; I cynically assumed she was lip-synching.

Back in September, the arrest was just another notch in Ferreira’s mottled, distorted career path. That’s well-documented and needs no recounting here. At the end of October, Night Time, My Time was released through iTunes exclusively, as if her label was reticent to print it on CD and vinyl, lest they have another non-starter. As I wrote last week in this space, the record is phenomenal, assured and authentic. Her show at the 9:30 Club in D.C. on Nov. 18 was a triumph, a sterling performance for the 21-year-old, who’s never headlined clubs that large. Ferreira is utterly magnetic, Madonna in 1984, an indie bubblegum pop superstar who’s still loved by her fans singing along, and the fact that nearly a thousand people came and stayed just to see her play brand new songs.

Night Time, My Time was more or less performed in order, with a few switch-ups and the oldies “Lost in My Bedroom” and “Everything is Embarrassing,” both by far the least interesting songs of the night (you could really hear the chatter and bar rush during the former—Ferreira seemed disinterested herself). But who can blame her? Brand new cuts like “Love in Stereo,” “I Will,” and “Omanko” were just as crucial and powerful as the hits—“24 Hours,” “You’re Not the One,” and “Nobody Asked Me (If I Was OK).” Reports of a “meltdown” at her NYC show last week were either overblown or isolated, because Ferreira couldn’t have been more professional and commanding. She bellows out bitter, angry, and frustrated lyrics at the top of her lungs, and then thanks the crowd with the tiniest, Bjork-esque “thank you”’s imaginable. In September, she hardly got any applause or attention that wasn’t obligatory, and it showed—she sounded bored and jaded that night. What a difference two months and a killer record can do: the club was comfortably filled but not quite sold out, and the roar of the crowd was manic throughout, and you could see how much it affected Ferreira. She’s enormously endearing, at least to me: her songs speak for themselves, and her aloofness isn’t a contrivance, it’s natural. I mean, do you really need an explanation or statement of intent more thorough than “I Blame Myself”?

Thanks to Pitchfork’s “Best New Music” endorsement and a slew of choice notices for the new record, the crowd was a bizarre mix of Ferreira’s most devoted fans—underage girls, cloistered at the very front, older men, younger professionals, bros, and twentysomething guys like me, who had never heard a Sky Ferreira song before this fall. It was obvious going in that this was, for the most part, a crowd that has only known Ferreira for a month or two, and you could read the looks on everyone’s faces, waiting to judge for themselves, to see if it’s a bandwagon worth hanging onto. And it is. I’m driving the fucking wagon, boys. And don’t call me a fair weather fan—I’m on #TeamSky indefinitely. Like a lot of people, I never would’ve bothered with another semi-pre-fab ready-made pop chanteuse forcibly pushed on the mainstream, the underground, and everywhere in between, but these new songs change everything. It’s power pop to the highest degree, but damp and dark, relentlessly catchy and intoxicating. Set openers “Boys” and “Ain’t Your Right,” which I didn’t care for before, hit me like a freight train. Ferreira doesn’t have to say a word: it’s all in her assassin eyes.

It’s still not clear how much agency Ferreira has: she writes lyrics and contributes musical ideas, but it’s impossible to look inside the vortex of managers, producers, executives, and major label dross that has slowed her down like molasses until now. Put it this way: Ferreira was shrouded in artificial smoke for most of the night from a machine that I could swear you could hear whirring in between songs. Smoke machines are so unavoidably cheesy, but not Monday night. I realized I’d been standing in the same spot all night, barely blinking, staring at a real Rock Star, a public domain cartoon character, somehow otherworldly, inhuman.

Maybe some can’t square authenticity with pop idolatry, but I can, because pop is the same as the movies, it’s a show, and it’s endearing to see artists my age embrace, play with, and live in the superficial, junk culture we were weaned on, to make meaningful statements about exactly that kind of shallowness and lack of feeling. Ferreira is on the cusp of massive success, on her aesthetic and sonic terms. A couple of months ago in New York, I was talking to a friend who, through the grapevine, reported that Ferreira complained only reviewers come to her shows, no fans, no one that knows the songs. Knowing that frustration has eaten at her for years, seeing the unadulterated love and affection effusing out at her in a club as intimate as the 9:30, and seeing the smile on her face, tearing up at times, it was a magical night for an artist that deserves to kick everyone, including me, in the teeth.