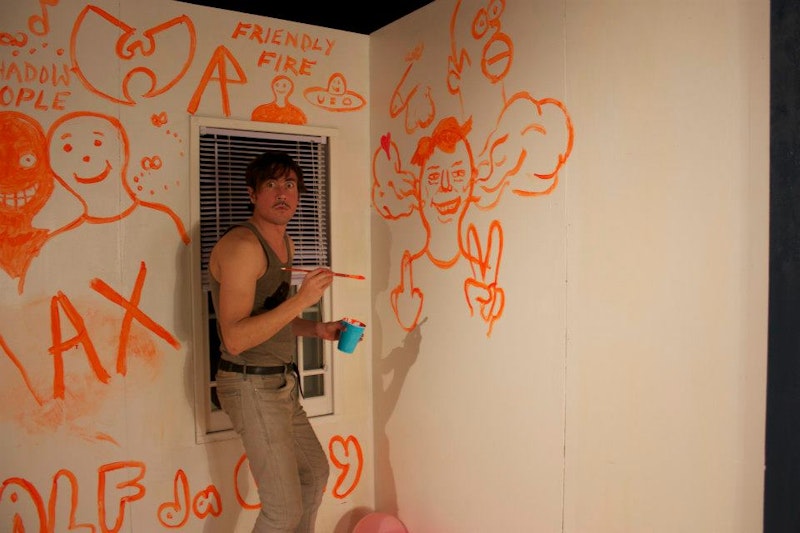 Max Eisenberg is sorely missed here in Baltimore. His performances as DJ Dog Dick circa 2008-2011 were some of the most exciting shows of my life. This is probably my favorite live performance I’ve ever taped. Eisenberg is an excellent composer with a distinct melodic sensibility, using disturbing drones, modular synth sandpaper hiss, vivid, repetitive melodic phrases and samples to make this music that isn’t pop, hip hop, or noise, it’s something that shoots back and forth in a diagonal between the three, within songs. The Life Stains is deeply personal and ambitious. It has a physical effect on me: the nauseating opener “Our Kin” marches in welcoming you to a sick carnival where sounds and modes you’re familiar with are mutilated and cleaned up afterwards. It’s the sound of digestion, something dying, but with no sense of doom or goofy heaviness. It’s the germs inside your intestines. It messes with your equilibrium in a really pleasing way, disorienting but not psychedelic at all.

The hi-fi production and attention to detail make you feel the ooze on your skin. It surrounds you. Oppressive isn’t the right word; this music swallows you. It’s hooky and concise, but turns sharply dissonant and jarring, jumbling your brain into a disorienting fog of sound, close to the effect of playing two separate records that miraculously sync up in terrifying euphony. “Grease That I Got,” an older song, is completely reconfigured from a minor key carnival barker banger into a soaring pop rock anthem that whips its dick out with the bare R.E.M. bass line that will immediately shock anyone waiting on first listen. Everything is very carefully arranged and warmly recorded, you want to listen to it over and over to understand the structures and how the parts fit together in songs that take a dozen listens to hear clearly. It’s like being in a dense, greasy green fog, hurtling back and forth and sideways. Eisenberg’s vocals are overpowered by the music in a lot of places, obscuring his great lyrics, hilarious (“Oh monkey monkey/You are not so unlike me [...] prone to sudden bouts of rage/and fondling your leather sack) and poignant (“Dark circles under her eyes/White skin shown in the sunrise/She’s glowin’/She’s growin’/Mysteries sweeter than our thighs/Her brain smells suicide/Downer chicks fly salt into your slide [?])

“Fourth of July” is such a beautiful song, a driving beat and wasted Van Halen guitars sounding bloated, blown out, slightly off kilter and exhausted, like a backyard party going on well into the second week of July. There’re weeping harmonies, and a lost friend, “dying and gone,” as we sink abruptly into the base of a storm drain, assaulted by irate car horns, canned laughter, and a haunting, melancholy organ phrase that sings up from this sick, bleak place. I’ve listened to The Life Stains three dozen times and it still makes my head feel insane and vulnerable, nervous, and raw. This is his Song Cycle, just as messy, digested, undigested and schizo, jumping from place to place, compelling bit to bit, in a torrent of dark, uncomfortable emotions.