At 19, Bugg’s new Shangri La is another eye-opener. 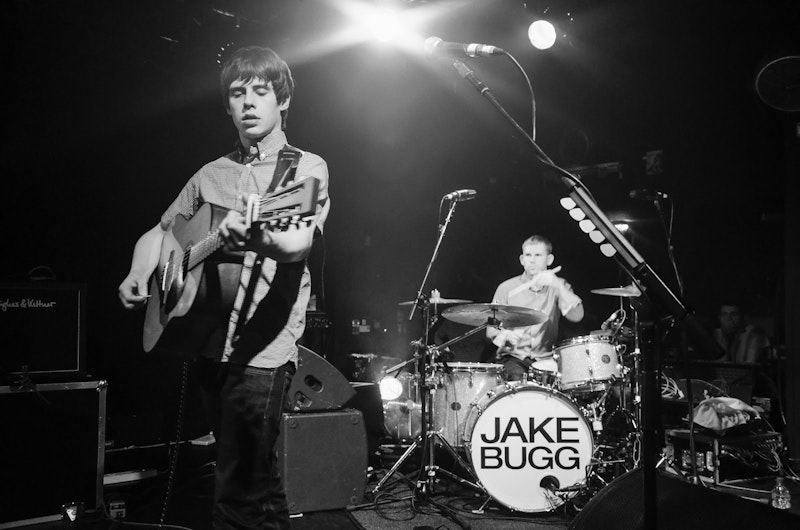 There’s one lyric on Jake Bugg’s second record, Shangri La, in an amiable song about a failed romance, “All Your Reasons,” that sums up why the British pop star has such a promising future: “’Cos it’s my heart’s desire/To set the world on fire.” It’s an audacious and honest declaration, the kind you’d expect from any musician who’s driven to work while the world is sleeping. Bugg’s eponymous LP, released just a year ago, was a chart-topper in the U.K. (it didn’t come out in the States until last April), and led to rave reviews, sell-out concerts, TV appearances, comparisons to the young Bob Dylan and instant celebrity—a rapid turn of events for a teenager who’d grown up in a Nottingham council estate. Several months ago, I choked when the opener to Jake Bugg, the crackling and infectious “Lightning Bolt,” was used as the backdrop for a TV advertisement for Gatorade. My initial reaction was “too much, too fast,” but upon reflection I realized that was anachronistic thinking. Had today’s ramped-up technology existed in 1963, it’s likely “Blowin’ in the Wind” would be snatched up by Madison Avenue.

Anyway, Shangri La, which came out this week, has been trashed by British critics, a knee-jerk slagging of the guy they were slavering to interview just a year earlier. In truth, there were a few red flags when the project was announced last summer: the producer is the slick Rick Rubin, who’s a product machine; just the title of the record, Shangri La, named after Rubin’s studio in Malibu, is grating; and the first single, “What Doesn’t Kill You,” while a straight-ahead rocker, and requisite homage to “Subterranean Homesick Blues,” sounded more like an outtake from Jake Bugg rather than something fresh.

And again, like the first record, that Bugg co-writes most of his songs, could make you wonder if he’s just a guy with a great voice (although some reviewers find it off-putting, forgetting that Dylan, Mick Jagger and Morrissey faced the same criticism), and a 1960s mod look who can also play guitar. Bugg defends his collaboration on songs, telling Andrew Romano that his main co-writer, Iain Archer, is “good at making sure I finish the song and then sit down and go through the lyrics… For every two ideas I have he’ll give me an opinion of which he thinks is the best.” (Romano’s Daily Beast article is a good one, though the headline is plain stupid: “Jake Bugg Isn’t the New Bob Dylan. He’s the Male Adele.”

Then you remember: Jake Bugg is 19.

So, while Shangri La doesn’t blow you away with a dazzling learning curve—it doesn’t make the leap from his first record the way Dylan’s Freewheelin’ or Elvis Costello’s This Year’s Model did—I give this ballsy kid credit for rejecting the advice of professionals to wait longer to release another album. And though a lot of the material mines the same subjects as his first record: the alienation from where he grew up, teenage angst and budding/doomed relationships, it’s far more confident, especially on the ballads, which were clunkers on Jake Bugg. I’m old enough to doubt that any songwriter/musician in my lifetime will come close to the sophistication and uncanny sense of the moment that Dylan possessed, but Bugg, who despite protestations, comes from the Dylan/Cash/Donovan school, with a spritz of the Arctic Monkeys thrown in, isn’t a temporary rock celebrity. Unless he’s derailed by drugs or alcohol, or simply has nothing left to say, Bugg will be around for a long time. It’s also worth noting that Dylan’s second record was released when he was 22, so Bugg has a head start.

Bugg’s career is moving so fast, at such a hectic pace, that you can discern a difference in the 12 songs; the ones he wrote later are laced with more cynicism and real-world experience. For example, on Jake Bugg, the lovely ballad “Something Like This,” was marred, I think, when he sings about traveling around the world, when in fact he hadn’t left England. The standout track on Shangri La is unquestionably “Slumville Sunrise,” an explosive rocker—the soaring guitars and impassioned vocal reminds me of Dylan’s ’66 tour with the Hawks—that reflects his unease about his hometown: "My friends they just ignore me." Bugg wrote about this on the first record, but here he’s more defiant: “Slumville Sunrise/Nobody cares or looks twice/Shine away in the morning/Across the place where I was born in/In every bruise every flower/Illuminated by the dawnin’.”

Similarly, in “Messed Up Kids,” the opening of which recalls Jim Carroll’s 1980 song “People Who Died,” and Bugg sings: “The messed up kids are on the corner/With no money/They sell their time they sell their drugs/They sell their body/And everywhere I see a sea of empty pockets/Beautiful girls with eyes so dark within their sockets.” The final track on Shangri La, “Storm Passes Away,” a nod to Woody Guthrie, demonstrates Bugg’s increasingly assured voice; it's a folk song that could’ve been written any time in the past 60 years.

Detractors say that Bugg’s a phony, sucking up to famous musicians, spending money on fancy duds, squiring a supermodel (the subject of about half the record) and hooking up with Rubin to gain a toehold in the U.S. So? One, what poor kid wouldn’t take advantage of undreamed financial success; two, at 19, he’s showing, like Dylan half a century ago, that he’s got a calculated plan, which is always subject to improvisation. It’s no accident that he chose Buffy Sainte-Marie’s 1964 “Universal Soldier” to cover at a UK appearance last June. While a 21st century teenager, his knowledge of the pop/folk/rock/country canon is a calling card; I’d be surprised if Bugg’s third album, undoubtedly set for late next year, will quiet his current critics.