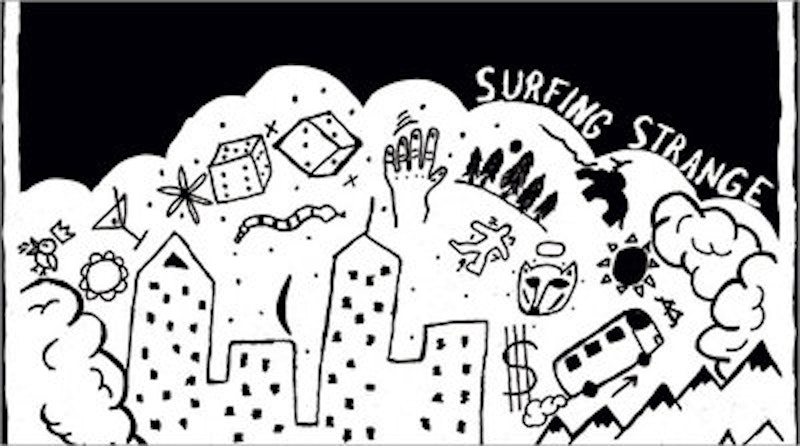 The second full-length album from the group Swearin’, Surfing Strange, brandishes the power of rock ‘n’ roll institutions: the guitar and the four-piece band. Surfing Strange revels in the sludgy bass tones and distorted riff textures of late 1980s, early 90s indie-rock. But Swearin’ aren’t interested in faithful retreads—though plenty of indie groups are making a name for themselves right now doing exactly that—but rather in trying to illustrate why this music might have been valuable in the first place.

The album opens with the gentle strum of “Dust In The Gold Sack;” it’s easy on the ears, but also a bait and switch. Things quickly scale up in volume and density with the aid of two thick strains of guitar fuzz. Lead singer Allison Crutchfield (who splits vocal duties with Kyle Gilbride) starts to sing about “cracks in the ceiling above us.” The drums beat out a basic series of heavy thwacks, interspersed with the repeated crashing of cymbals, as if someone just learned how to play and wants to break the ceiling to make Crutchfield’s prophecy come true.

It’s a strong opening salvo. Is it different? Influences are easy to spot on Surfing Strange. “Curdled,” with a Velvets riff, the crack in Gilbride’s voice, and lines like, “in a certain way, everyone’s laughed at,” could have existed on any Pavement album released after 1991’s Slanted And Enchanted. “Echo Locate” evokes the Pixies’ Black Francis, and when Crutchfield sings over this sort of instrumental backing, the Breeders and Throwing Muses come to mind. Singing “I’ve just drifted/nothing changed,” or “it makes no difference now” is almost a caricature of indie-rock apathy.

But the past is just one aspect of the album, and it often pales in comparison to the distortion spread across these tracks, looking only for a ruckus to create in the present. Various instruments try to foil the indomitable fuzz. In “Watered Down,” Gilbride sings over oozes of sticky bass. “I know why you’re hidin,’” he intones. By the end of the song, hide-and-seek is over, as a bludgeoning guitar hammers repeated notes. The repetition screams finality, but Gilbride has actually gotten less sure of himself—all he can offer here is, “I hope you’re right.”

“Mermaid” also employs two motifs: a plaintive, wandering passage, again bass-driven, followed by the thunderous entrance of a cloud of distortion, making it hard to tell where the cymbal hits end and the fuzz begins. “Melanoma” starts with low guitar picking and hushed vocals about laziness and uncaring: “spend another day in bed,” “never mind, never mind.” “The good old days escape you/they’ve never seen so few/blink twice you miss it,” sings Gilbride. But no one could miss anything here: the band brings in more massive waves of guitar, and when the vocals return, they’re barely intelligible over the crackle. It’s peace disturbed, intimacy disrupted.

The album’s most convincing sequence comes closer to the end, when the band resists the temptation to explode. “Loretta Flowers” starts and ends as a slow guitar ballad about heartbreak. There’s no uncaring here, no bursting—the other shoe never drops. “When you come over/you talk to me about things you don’t know/or understand,” sings Crutchfield. “It’s a mess it’s a mess it’s a mess.” There’s a kiss-off at the end for good measure. “When you get older, you’ll realize what this was… or you won’t/you’ll remain ignorant and in pain.”

But Swearin’ doesn’t give the listener anytime to pity this poor bastard—there’s a sudden shift into the swift tapping percussion of “Glare Of The Sun.” (It approximates the steady tattoo that rides beneath Springsteen’s “Candy’s Room.”) But this tune never breaks open either, the percussion just keeps tapping furiously. The song moves into a ballad section, where the band regrets that “the sun is hot/it burns my skin.” A piano taps a few keys. Then the tune slides back into the uneasy march. “How can anyone/spoil your fun?” asks Crutchfield earlier. Here, it sounds like no one can.