The Flat Hat of Steely Dan

Walter Becker solo is a lot better than Donald Fagen. 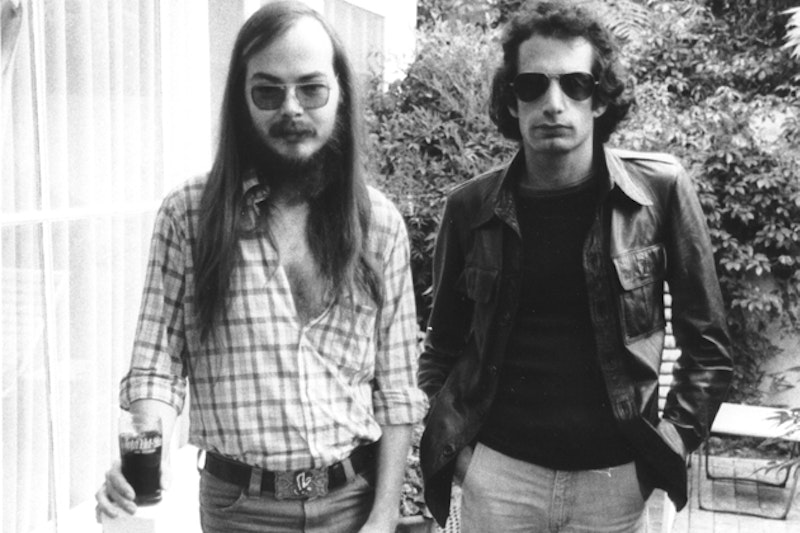 Donald Fagen's 1982 Nightfly has pretty much nothing but five star ratings on Amazon, which is one of those incomprehensible blips that make you wonder why anyone ever thought it was a good idea to crowd source anything. Nightfly is Fagen's first solo effort and it sounds like his most famous band with its brains scooped out by a vapid sax line. Steely Dan deployed smooth jazz as knowing, repulsive smarm—the oleaginous charisma of the burnout. Fagen, alone, though, just retails saccharine as saccharine; the unbelievably awful opening track, "I.G.Y." is all bouncy cheer with the chorus actually declaring, with no apparent irony, "What a beautiful world this will be!" Paul McCartney’s done as bad, perhaps, but no worse.

That leaves Walter Becker as John Lennon. And damned if he doesn't do a pretty good job of it. His first solo effort, 11 Tracks of Whack, wasn't released until 1994, but it doesn't take long for him to establish who was writing those languidly snotty Steely Dan lyrics. "In case you're wondering it's alive and well/That little habit that you left with me/Here in the suburbs where it's hard to tell/If I got the bear or if the bear got me," he sings at the beginning of the first track, "Down in the Bottom." If Fagen's album is a Steely Dan with the malevolent kinks airbrushed out, this is a clumsier, scruffier Steely Dan, the AOR glop hovering around the sides in the dexterous jazz guitar while the overdriven drums bash against Becker's serviceable every guy vocals.

In Steely Dan, the perfect polish suggested depths of depravity. Becker solo, though, puts the depravity up front, with the polish a kind of sneering background. "No fooling it's a fucked up world," on "Junkie Girl" seems like a deliberate rebuke to Fagen's vacuous optimism. Similarly, Fagen's awful, earnestly pointless lounge soul version of "Ruby, Baby" gets answered by Becker's "Book of Liars," a shoulder-shrugging melody which you could almost see the Drifters lifting towards the rooftops. Not with those lyrics though. "I waited so long girl and I came so far/To find out you're not always who you say you are/And there's a star in the book of liars by your name," is a languidly bitter kiss-off line, matched in the second half of the song by the weird dissonant, keyboards, which stagger and spit against the unwavering groove—fusion spasms as broken reproach.

It's clearly Becker who was responsible for Steely Dan's occasional rock bite as well. "Cringemaker" is an actual blooze vamp, complete with a neurotically precise guitar solo that sounds pretty much exactly what you'd think Steely Dan would sound like if they decided to put a hot blues guitar solo on their album. And you can't get a much better rock song title than "Surf And/Or Die."

I wouldn't say that Becker's album is better than classic Steely Dan. The appealing scruffiness seems to go along, inevitably, with a certain amount of inconsistency. The reggae moves on "My Waterloo" are not a good idea, especially when paired with pallid lyrics about walking down the lonely road and wearing a heart on your sleeve. Over the course of a whole album, the emphatic, thumping drums get a little old… and there's certainly no song here that clicks together with the miraculous lurching grace of "Reelin' in the Years" or "Gaucho." Fagen may be awful alone, but he and Becker have a spark together that neither of them has alone.

When Becker, solo, lurches, he tends to really lurch, hold the grace. Which does have its own appeal—as on "Hat Too Flat," an odd song about visitors from Arcturus. "Our women are slung down low to the ground,/They're very good you've probably had one/Our men are brave, studly and wise," Becker declares while the keyboards blurp like Kraftwerk hit in the head with a hammer and skittery little jazz guitar runs suggest that the Arcturans spent some time as studio musicians. The folks from outer space know how to walk and talk, but the headgear is never quite right. A too flat hat is, apparently, what Becker brought to Steely Dan. You toss aside imperfection at your peril.