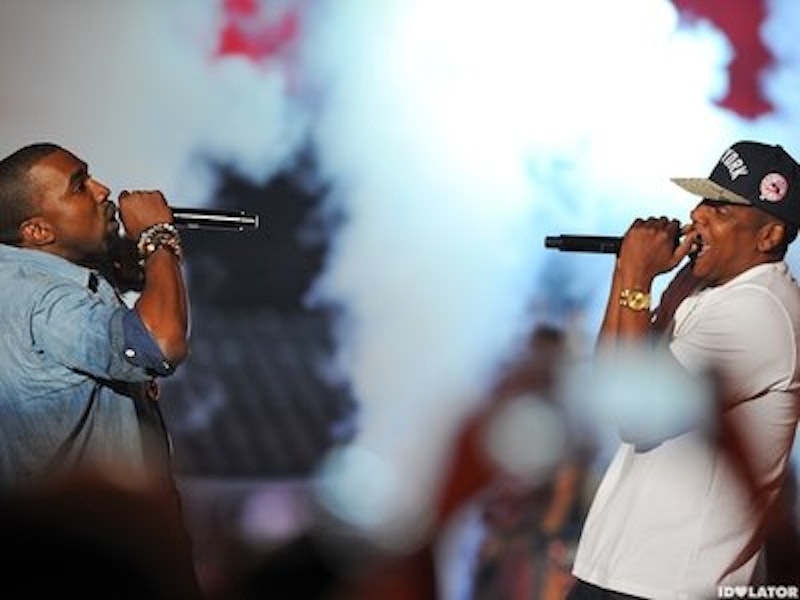 In 2001's Ocean's Eleven, Brad Pitt portrays the co-manager of a massive Las Vegas heist. In 1999's Fight Club, Pitt co-stars as the initiator of a string of bare-knuckle brawl franchises who is ultimately revealed to be a figment of Ed Norton's imagination. Rousting the specters of these films isn’t fashionable today, yet they surface in two of the summer's biggest event-rap albums. On "Oceans" from Magna Carta... Holy Grail, Jay Z evokes the first movie in service of what might be the laziest hashtag rhyme imaginable; on "Bound 2," from Yeezus, Kanye West works the second movie and Pitt's Christian name into a snarled pun as a means of acknowledging that a lot of people think he's a dick. Jay Z's old-school reference falls flat on its face; West's is weak in a cool way, like when your homie from grade school randomly ties Gleaming The Cube into a conversation about why he can't maintain an erection anymore. This difference is instructive in understanding why one album is flawed yet compelling, while the other is an embarrassment.

Magna Carta... inarguably accomplishes two things: it makes Kingdom Come, Jay Z's 2006 post-retirement album, seem shrewd and sophisticated by comparison, and it manages to out-funny the first paragraph of Zach Baron's review of 2009's The Blueprint 3. If you notice nothing else on this album, you'll notice Hov's "Auhs"; they are labored, arthritic, and asthmatic, like listening to your great uncle's first misguided attempt at rap. There has been much talk of "dad rap" surrounding Magna Carta, but "grandpa rap" might be more appropriate.

Producers aside, no one comes out ahead here: Frank Ocean fakes an accent that doesn't quite exist, Justin Timberlake might as well be singing the phone book, Beyonce's coasting. On the execrable "FuckwithmeyouknowIgotit"—is the chorus a boast or a stab at self-assurance?—a half-asleep Rick Ross actually raps, "Reeboks on/I just do it, nigga," probably giving Nike's ad representatives heart palpitations.

There are various brags about art possessions subbing in for brags about expensive cars, but one comes away with the sense that Jay just needs something to brag about. "Tom Ford," about fashion being like taking drugs, is spit in a tired M.I.A. flow, the hook flogged desperately and repeatedly in an attempt to make it resonate. "Picasso Baby" bites an ancient Toyota slogan and employs the phrase "run amuck." R.E.M.'s "Losing My Religion" and Nirvana's "Sells Like Teen Spirit" get raped because the budget allowed it to happen. Somewhere in depths of this interminable nightmare of a Samsung passion play, somebody shouts out Eyes Wide Shut; there's a weird pre-cognitive cut where Jay raps about being a single dad. Yeah, it's that kind of awful.

"You are in the presence of a God," he spits at one point, ambiguously, mentioning Nina Simone's "Strange Fruit" at another. On Yeezus, West does him one better, titling a track "I Am A God" and repurposing "Strange Fruit" in eyebrow-raising ways on "Blood On The Leaves"—though the lynching ballad rates a lyrical cameo in "New Slaves" as well. Where Magna Carta is sodden and unfocussed, Yeezus is stark, strident, singeing: synthesizers straight out of Nine Inch Nails' The Downward Spiral zap and ground. They portend a frazzled, wearying album about race, sex, cultural cuckolding, corporate slavery, how commitment sucks, nihilism, more sex, racism, and Chiraq so simultaneously hardcore and noisy and uneven—how one feels about it varies from week to week, from track to track. Is "On Sight" brilliantly subversive or empty provocation? Is "Bound 2" a weak-sauce piss take on West's chipmunk-soul yesterdays—my first read was "Devil In A New Dress" Part 2—or the rocky first chapter of a storybook romance? Is "I'm In It" achingly intimate or exhaustively profane?

In a sense, Yeezus is a lot like the modern art objects Jay Z likes to collect, display, and Instagram: its meanings are malleable and interchangeable and chameleonic, ugly, angry knots of oil paint or fabric registering as beautiful when you're in the proper state of mind. I mean, is "Send It Up" a prelude to a wake or an orgy? The louvered klaxons and Jamaican patois both warn and beguile, with King L's street-casuality violence begetting West's victorious clubland assholisms. You could see the juxtaposition as a cycle of sorts, or you could dismiss that interpretation as overly generous, but the incongruities of Yeezus never quite resolve; there's an infinity in its bristling imperfections, something that's way beyond Magna Carta's grasp. Saleswise, it's the Velvet Underground to Jay Z's Rolling Stones—a prelude to a Fight Club to be, the uncomfortably unsettled sound of the future of music.

—Raymond Cummings is the author of several books of poetry, including Crucial Sprawl, Seven New Poems, and Assembling the Lord. He blogs infrequently at Voguing to Danzig (http://voguingtodanzig.blogspot.com/).