The Band That Just Won't Die

Thanks to The Piece Kor, Bel Air, MD will forever be hallowed ground for lovers of extreme teen rock. 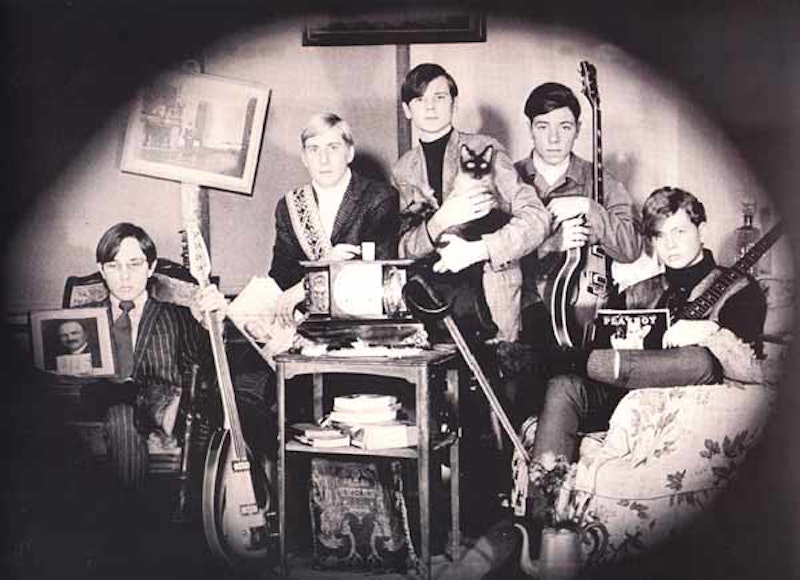 While blazing through DelMarVa's tangled by-ways and highways, The Piece Kor attracted attention from the bigwigs at United Artists Records. U.A. caught wind of The Kor’s sonic assault after Larry Sealfon sent the major label a copy of the Laray 7." At the time U.A.’s competitors were putting out releases by noisemongers The Velvet Underground, The Stooges, and Alice Cooper, all artists who shared The Kor’s penchant for avant-garde innovation, bizarre showmanship, and fuzzed-out blasting. Looking to stay one step ahead of the competition, U.A. tried to track down the quintet on their home turf initially through WVOB DJ John Miller who then sent label reps to Ray Scott. Unfortunately the chance to get big label support came at the wrong time.

Years earlier Charley Clark began supplementing his rock ’n’ roll income by working for The Baltimore Gas And Electric Company. Consequently, he found the prospect of fulltime music work to be intrusive to family commitments.

Charley Clark: “I had a financial responsibility because I had a [young] son and some of the other guys were doing other stuff and it just got to the point where we had to go on the road and promote this group which I don’t think anybody at that point and time was ready to do.”

Ray Scott: “If the record companies see that you’re gonna be a fight or a hazard, back in those days there were plenty of people to record. They went around for a couple weeks back and forth on phone calls and things and [U.A.] just kinda lost interest.”

The Piece Kor slowly disbanded as high school graduation and “the real world” began to take precedence. Scott and Clark then joined forces managing and promoting The 19th Amendment, an all-girl Bel Air act who enjoyed local notoriety during the early 1970s. Mick Ball took an extended break from music, but returned to writing, releasing, and playing original solo material starting in the 1980s and he’s barely stopped since. Mick’s newest songs can be found at his website  and his music videos can be streamed via YouTube.

Soon after the breakup, Jack Bandoni enrolled in college in 1968, which got him deferment from the Vietnam draft. He returned to New England in 1977 to be near his nuclear and extended families. From 1978 to 1980 he worked for Muzak while studying copyright law. He never made another recording until the early-1980s when he self-produced and released a cassette album called One-Man Bandoni. This was an excellent collection of sunny melodies in the vein of Guided By Voices, Robyn Hitchcock, and other psych-pop eccentrics. The tape contained sweet acoustic tracks, cosmic synth flights, and some odd electric janglers. The homespun charm of One-Man Bandoni can’t be compared fairly to The Piece Kor/Knights Of Sound’s work, but it remains one of the more interesting 1980s records recorded by a 1960s teenbeat legend. Today Bandoni continues to write and perform his unique music and cover material with The Neo-Retro Band.

Crypt Records’ Tim Warren was the first major archivist to uncover the mutant energy of The Piece Kor’s “All I Want Is My Baby Back.” In 1996 Crypt gave the song its first reissue when the label included it on Back From The Grave volume 8. While vintage DIY teen rock has never been celebrated by any of the mainstream’s gatekeeping/navel-gazing music award shows, an inclusion on a Back From The Grave volume is probably as close as anything gets to being an ultimate garage rock honor. Global respect, historical importance, and collector’s item status is instantly bestowed upon any track lucky enough to grace a BFTG track list.

Grave 8 received college radio airplay and praise from 1960s punk collectors, many of whom had never heard The Kor’s disc before Crypt reissued it. The compilation’s biggest hype came when it made a Top 10 album list published in a 1998 edition of the Spin Alternative Record Guide. That list was assembled by lo-fi rock hero Lou Barlow. Thanks to this indie pedigree and the ever growing cult surrounding lo-fi sounds of the pre-disco era, Back From The Grave 8 turned a new generation onto northern Maryland’s wildest 1960s record.

Laray initially pressed 500 copies of “Words Of The Raven” b/w “All I Want Is My Baby Back.” After the Crypt re-issue the floodgates opened and more Piece Kor reissues followed. “Words Of The Raven” made its way on to Sixties Rebellion vol. 14,  a ”gray market” various artists CD/LP released in 1996 soon after Grave 8. Though it contained all vintage North American recordings, it was released by German imprint Way Back Records. Throughout the 2000s numerous websites and blogs featured digital audio file copies of The Kor’s 7”. In 2014 both sides of the single got a new legit re-issue on Gear Fab Records’ double-CD Psychedelic States: Maryland In The 60’s, the most exhaustive compilation ever to focus on Vietnam era rock from The Old Line State.

A 2010 Goldmine article by Patrick Prince contained a list of the world’s rarest, most sought-after vinyl records. The Piece Kor’s single made it to number three beating out mega-rarities by The Beatles, Stones, and Doors. In 2010 the Laray 7” had sold at auction for $3785.

The next big moment in The Kor’s afterlife involved a batch of unreleased tracks that the group cut in 1968. These seven Piece Kor songs were produced and engineered by their supporter John Miller from WVOB. The session took place at a small concert hall in Bel Air. These recordings present The Kor at their most original and versatile. The songs appeared on a micro-edition of eight-track cartridges. For decades the only copies in existence were those kept in private archives by the five original band members. In the 2010s, Jack Bandoni developed an interest in digital recording and audio mastering. He got the unreleased mini-album re-mastered. Short clips of each song were made public for the first time via a Piece Kor retrospective section on The Neo-Retro Band’s website.

With shimmering folk-rock (“If You Need Someone” and “The Reason For Why Or When”), fried psychedelia (“I Hear The Colors”), riff-driven stompers (“Take A Good Look” and “Flower Children”), mournful doom-rock (“I Must Be Free”), and horror punk (“Rosemary’s Baby”), the John Miller session sounds as dynamic today as more than 50 years ago. This inspired Charley Clark to give his old group a new nickname: “The band that just won’t die.” Bandoni continues to keep the Kor flame burning. He’s currently working towards the release of a full-length Piece Kor album. This will include their mini-album’s first legit issue coupled with two unreleased songs from The Knights Of Sounds’ Airtone session, all of the Kor/Knights Of Sound 7” tracks, and detailed liner notes. Bandoni and co. plan to adorn the LP with cover art assemblage of photos, promo material, record label shots, and other memorabilia.

The Harford County area has been fertile ground for challenging new music. The Cross Bloods, Passiou, New Age Hillbilly, Morning Dew, Sammi Hell, and Some Mess are just a handful of the innovative young artists who have followed in the footsteps of “The band that just won’t die.” Could their sonic interruptions of exurban boredom have come to life without HarCo’s incendiary 1960s scene? The jury’s out, but thanks to The Piece Kor, Bel Air, MD will forever be hallowed ground for lovers of extreme teen rock.