The Uglier Grunge Era That Wasn’t

In praise of Amphetamine Records, that other Washington label. 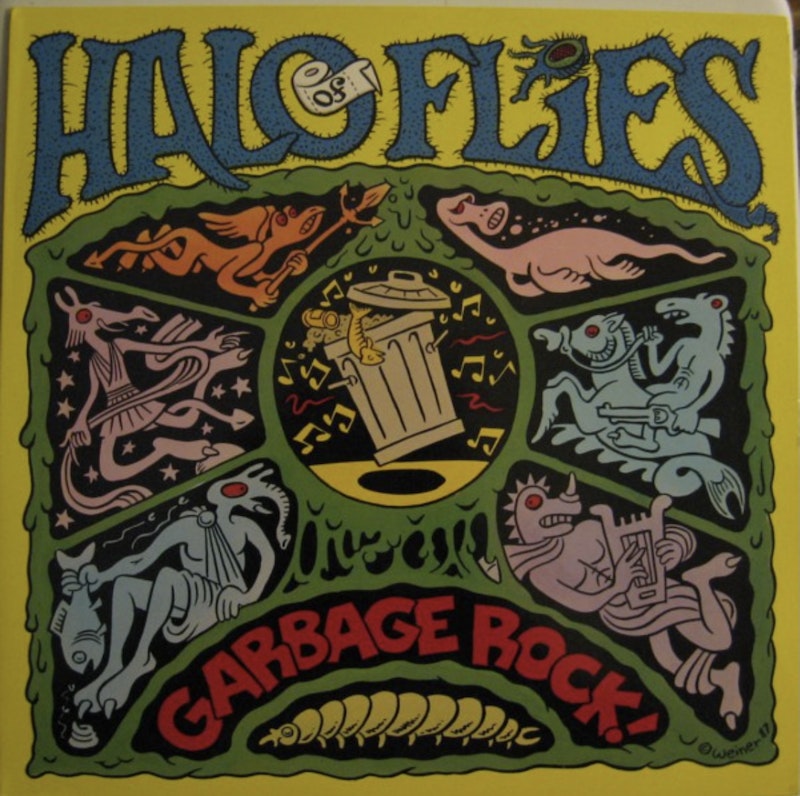 In the late-1980s and early-90s in Washington state, Tom Hazelmyer’s Amphetamine Reptile records was the noisy yang to Sub Pop’s poppy grunge not-quite-as-yang. Sub Pop in Seattle had Nirvana, Soundgarden, Mudhoney, L7, Tad, Screaming Trees, and a whole roster of acts who took post-Stooges metal-fused punk and turned it into radio-ready hits. Amphetamine Reptile, in contrast, mostly featured less well-known Neanderthal skulkers like the Melvins, the Cows, the Unsane, Boss Hogg, and Chokebore—bands less likely to appear on the radio than to pick up the radio and smash it against their skulls until it broke or they did.

Hazelmyer’s series of mix tapes, Dope, Guns ‘N Fucking in the Streets, chronicled an alternative to the alternative revolution—a parallel history in which grunge turned aside from shiny pop to wade deeper into pig filth. The digital 47-song, two-hour collection of all 11 cassette volumes is a continuous blast of rude weirdness, weird rudeness, and feral intelligence buried beneath the cranial murk.

The most characteristic Amphetamine Reptile band is undoubtedly Hazelmyer’s own outfit, Halo of Flies. It’s represented here by “Insecticide Stomp,” a track which sounds like a hardcore song is trying to scrabble its way out of a grunge nightmare with much screaming, head-banging and fingernails tearing at flesh. Other icons include the label’s one big moneymaker, Helmet, whose “Impressionable” manages to be snottily catchy at neck-snapping tempo, and grunge great-grand-monster The Melvins, who wade through Sabbath riffs of toxic sludge on “Euthanasia.”

What’s wonderful about the Dope, Guns, ’N collection is you never know who or what will come slouching through the murk on the next track. Hazelmyer recruited a number of bigger names, like Mudhoney, Jesus Lizard, and the Boredoms to contribute one-off tracks. The last turns in the demented “Pukari” which sounds like what you’d expect if a Japanese noise metal collective turned themselves into a head-banging grunge trudge but kept getting distracted by opportunities to funk or yodel.

The lesser-knowns sometimes upstage the stars. The U-Men’s cover of Shadows of Knight’s “Bad Little Woman” alternately leans back into blues and ratchets up to thrash. Australia’s King Snake Roost unleashes a sewer-dwelling bass as vocalist Steve Tregilgas moans about having misplaced his lighter on “My Zippo.” Chicago’s Dwarves come on like a so-lo-the-fi-is-actually-torn-out version of Motorhead on “Lesbian Nun.” Lubricated Goat do filthy rockabilly on “Bad Times” where they grunt and mutter about their pubic hair uncurling. Love 666’s “You Sold Me Out #2” is a bizarre mix of slowcore and sludge, with a filthy riff grinding under the pretty harmony chorus. And the last track is Servotron’s Devo-like “Matrix of Perfection,” which sounds as if the label had bashed its way through metal and found itself on the shores of New Wave.

Listening to the comp now, some 20 to 30 years after this music was the next big thing, it’s striking just how unhinged and fierce the milieu was. It’s hard to believe that the scene which showed The Thrown Ups assaulting their instruments more or less at random while screaming “Traffic accident sex!” over and over managed to put anything on the charts, much less on MTV Unplugged.

Dope, Guns, ‘N Fucking in the Streets also hacks up the bright line between Nirvana and Pearl Jam and Courtney Love and the stuff that just was not going to blow up, no matter how many explosives it crammed into its orifices. The Cows could shout “Yaba daba doo, I’m going to yaba daba you!” until the ungulates wandered back to the stable, but as long as they sounded like they were playing in some subterranean barn bowel, the financial rewards were likely to be limited. Amphetamine Reptiles greatest comp burps in your ear about how wonderfully odd the 1990s were, and weren’t.