The Authenticity of Iggy Azalea

Why fake isn't bad, and why it is. 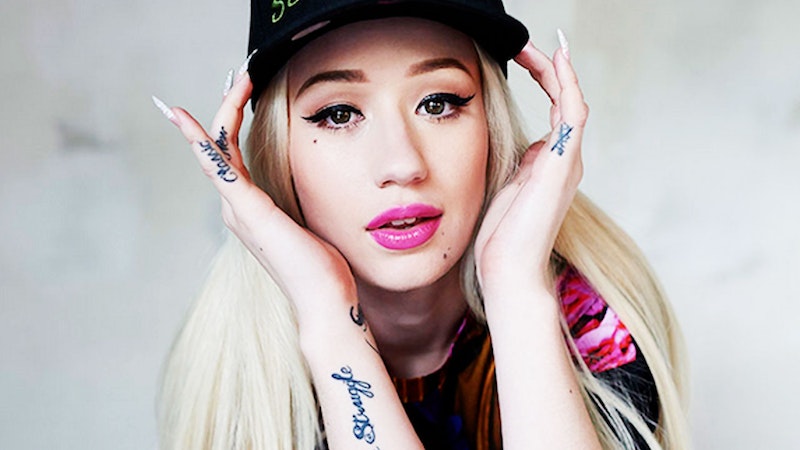 "First things first, I'm the realest," Iggy Azalea raps on her mega-hit "Fancy." Just about everyone would disagree with her; if there's one word that most describes Iggy for her legions of detractors, it would not be "real." If anyone’s fake, that anyone would be Iggy Azalea. A white woman from Australia who deliberately adopts the accents of Southern black people; a thin conventionally attractive woman who rapped on a hit boasting about "big, big booty" as if she has one, Iggy's brazen artificiality is extreme even by the standards of slick radio hip-hop. Her plasticity is only rivaled by her success; she's broken Billboard sales records that have stood since the Beatles. The combination of mega-popularity and egregious, unapologetic fraudulence has resulted in a withering critical backlash, summed up by Jamilah Lemieux's characterization of Azalea as "A lyrically-vapid foreign White woman doing lazy blackface in a lakefront." "Iggy," Lemieux concluded, "is awful."

Blackface often comes up when talking about Azalea, and there's no doubt that as a white woman she's adopting the phrasing, the accents, and the style of black performers before her. That certainly makes her inauthentic.

But is inauthenticity awful? American music has a long, and often glorious, tradition of musical borrowing, miming and imitation. Elvis' reworking of R&B, or Mick Jagger's, are some of the most famous, but there are many others. Louis Armstrong gleefully claiming Irish ethnicity on "Irish Black Bottom,"; "Howlin' Wolf" turning Jimmie Rodger's yodel into his own trademark yowl; or de la Soul lifting the cheesy-cool of Steely Dan. Jazz combines African-American rhythmic freedom with European instruments; bluegrass uses the African banjo to perform tunes from English and Ireland; mash-ups smush together white and black performers, and white and black traditions, into a joyful groove. American music and American musicians have never drawn boundaries around race; on the contrary, everyone, of every complexion, has imitated, borrowed and learned from everybody else. If "keeping it real" means keeping it pure then there's just about no real American music anywhere.

In fact, Hugh Barker and Yuval Taylor argue in their book Fakin' It that the quest for realness has often historically been a quest not just for musical purity, but for racial purity—which is to say, it's often been racist. Henry Ford was obviously so, in his efforts to get rid of degenerate jazz in favor of authentic old-time fiddle music untainted by black or Jewish influences. But Barker and Taylor point out that a similar impulse animated the folk scholar John Lomax, who spent much of his career seeking out the supposedly purist black music, untouched by white influences. "For both [Ford and Lomax], Baker and Taylor write, "the most authentic American music was that which evidenced a clear and absolute divide between white and black." And while Lomax was supposedly an admirer of black culture, his fetish for authenticity led him to treat the performer (and former prisoner) Leadbelly, who he managed, with contempt. He insisted Leadbelly wear a prison uniform on stage rather than the suits the singer preferred, and in his marketing copy would make much of Leadbelly's supposed violence. Lomax treated Leadbelly as an avatar of "real" blackness, rather than as a human being.

So, if authenticity is at best a fiction and at worst a fig leaf for white supremacy, does that mean Iggy is not awful? I wouldn't go that far. I like Azalea's music; her critics are right when they say that her rapping is clumsy and her lyrics boilerplate, but her album delivers pop hooks with a consistency that eludes the in-every-other-way-more-talented Nicki Minaj. Azalea is no ABBA, but as bubblegum she's not necessarily any worse than, say, The Archies.

If Azalea were willing to make animated videos where her place is taken by Archie and a cartoon frog, all might be well, even if she did use somebody else's accents. Even if she stuck to presenting herself as she does in "Fancy"—which is a riff on the movie Clueless, things might be okay. But Azalea isn't content to be just bubblegum, because she’s obsessed with authenticity. Declaring herself the "realest" on "Fancy" is not an unfortunate aberration; much of her persona is based on the ludicrous fiction that she is tough and street and… real.

The lack of self-knowledge in her self-presentation reaches a painful nadir on "D.R.U.G.S" where early on in an uninspired freestyle she declares, "When the relay starts I’m a runaway slave-master." A black rapper saying that line could be read as reversing, or pushing against, racist tropes. When Iggy says it, it's hard to hear it as anything but a boast that celebrates the power of slave-owners, and the power of Iggy's own whiteness in comparison to the black men and women in chosen genre. She's imitating black people's voices to spit on black people. As Lemieux says, that's a good definition of blackface. And it's awful.