The Struggles of Nicki Minaj

Why can't a great artist make a great album? 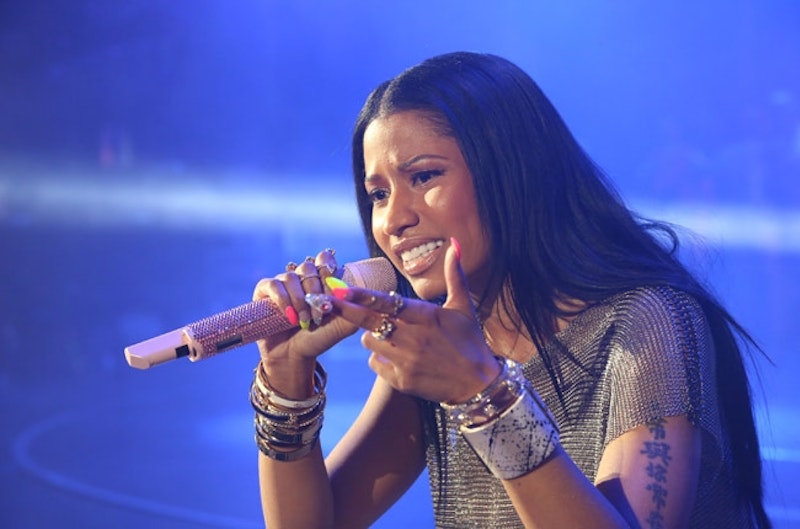 I want to love a Nicki Minaj album. I loved her early singles; the crazed schizoid performance on "Monster", which makes Jay-Z look flat-footed and square in comparison, or the machine-gun nursery-rhyme profanity of "Itty Bitty Piggy." I've thoroughly enjoyed her recent videos, from the uber-misandry of "Lookin Ass" to the over-the-top booty celebration of "Anaconda." In an increasingly bland pop hip-hop landscape, Minaj remains refreshingly eccentric, switching from sexy to aggressive to goofy at the drop of a manic syllable. She's great. Ergo, her album should be great. Right?

But it’s not. Minaj can make great singles and videos, but she has yet to release even a decent album. Pink Friday, from 2010, was lackluster, dragged down by default pop moves and a dearth of hooks. Four years later, and The Pinkprint follows the same dreary pattern. "All Things Go" opens the album with earnest surging synths and Hallmark card raps: "Cherish these nights/cherish these people/life is a movie/but there'll never be a sequel" is the sort of thing you'd imagine Billy Joel would say if Billy Joel decided to defile hip-hop with his presence.

"I Lied" is a mediocre R&B ballad, with Minaj alternating between adequate singing and a rap that attempts seriousness through sheer rhythmic lack of imagination. "Favorite" features Jeremih with those auto-tuned nasal vocals that I guess the kids love while Minaj does more dull raps declaring her eternal devotion. It's hard to choose the most disappointing track, but I'd go with "The Night Is Still Young," a half-assed retro-1980s inspirational piece that sinks below mere indifference by virtue of truly awful lyrics like, "Life is a journey/I just want to enjoy the ride." Nothing against Taylor Swift, but while listening to a Minaj album, I don't want to be forced to reflect on the comparative depth and wit of Swift's.

The album is full 70-minute CD length, and it's not all awful. "Anaconda" is on there, and it’s satisfyingly loopy. The collaboration with Beyoncé on "Feelin' Myself" invigorates the star, who spits raps like she's suddenly remembered to pay attention. "I say yes, Daddy, I do/gimme brain like NYU" has that gleefully filthy tossed-off flow that’s a reminder of why you want to listen to Nicki Minaj. She rolls into a pleasantly off-kilter groove on "Four Door Aventador," while "Big Daddy" has some of the same energy as "Monster," with Meek Mill's slower, deep delivery setting off Minaj's manic boasts, "Pulled up in something that look like a million, nigga put me up on/Ain't gotta sell it, but he say the pussy a drug that he re-up on." Why can't the album all be like that? Why do we have to hear about life being a journey?

The problem isn't that Minaj is abandoning hip-hop for R&B. It’s that she's abandoning hip-hop for R&B—and she's terrible at R&B. Performers like Beyoncé or even Danity Kane use pop and R&B to take on different personas, to be sexy or goofy or weird, or to put together songs in an odd way. Beyoncé pretends to be her boyfriend; Danity Kane goes from piano ballad to raging chipmunk harmonizing. Minaj manages that sort of invention, and more, when she raps—but her R&B songs all feel like some focus group told her she needed an R&B song there. Selling out is fine, as long as you can be interesting while doing it. Minaj, so far, hasn't been able to. Maybe at some point she'll collaborate on a whole album with Timbaland, Missy Eliot or Cassie and they'll figure out a way to harness her talents to radio friendly R&B. But until then, she’s doomed to spend a good portion of her albums working in a style that's inimical to everything that makes her music great.