None of these was Adele. 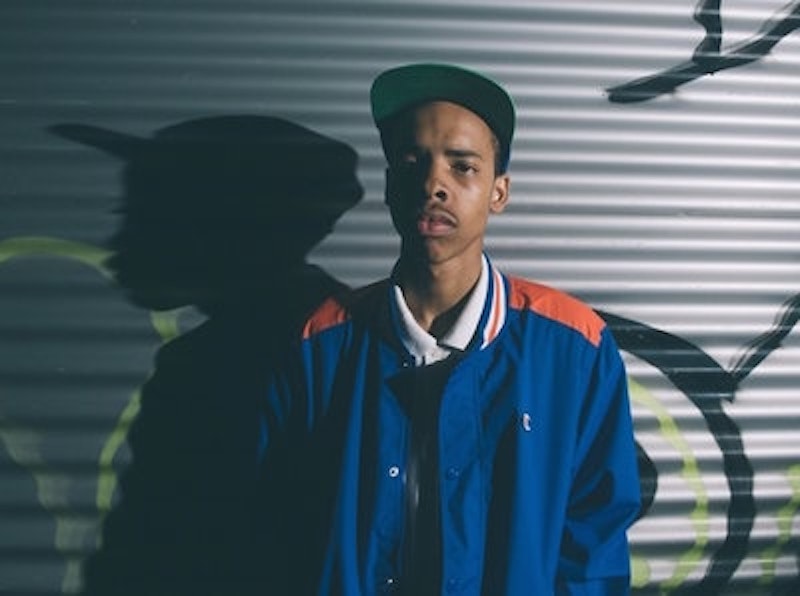 The Long Tail cracked like a bullwhip again this year, rendering the music landscape a wider, more diverse, and less recognizable space than ever. Meanwhile, the expanding middle class of rock/pop/rap got even wiser to its inherent disposability and diversified, spinning off more columns, labels, side projects, podcasts, and other assorted hustles than any single A.I. could hope to track or process. Roll your eyes and denounce the gig economy all you like, but just as it’s conquered real life, it’s colonizing entertainment so handily that the recent past looks a whole like the immediate future. Anything’s possible, and everything’s a stunt. There’s so much overwhelming noise now that locating worthwhile signals has begin to feel more like work than fandom, but we’ve done our best here; surprisingly, the Splice Today writers voting here stumbled into our highest degree of consensus ever, with five albums surfacing on more than one ballot. None of these was Adele. —Raymond Cummings

1. Earl Sweatshirt, I Don’t Like Shit, I Don’t Go Outside (Tan Cressida/Columbia). Earl’s 2010 self-titled debut—where he rapped about rape and murder and scatology—still hangs over the rapper, and the now-21-year-old is the first to disparage the music his “conscience wasn’t in.” I Don’t Like Shit is Earl’s older reflection. Both of the sub-30-minute, 10-track albums are insular and haunting. This one is a more mature response to a world that fervently supported a 15-year-old’s rape jokes. Since his return from Samoa, Earl has been labeled as “The Poetic Rapper,” the one whose lyrics you read the annotations for on Genius. On first listen, I Don’t Like Shit can seem like a step down from the verbal gymnastics that he pulled on 2013’s Doris, but that couldn’t be further from the truth. Instead of showboating, Earl demonstrates his talent with concision, lining his bars with specific, precise images that give the songs true density. Just ask one of the “fishy” rappers “eating off of hooks.” They probably don’t even realize they were dissed. —Booker Smith

2. Vince Staples, Summertime ‘06 (Def Jam). Why does Vince Staples incite so much hate? After declaring his distaste for 1990s rap, Twitter collectively freaked out on the 21-year-old, reminding him to “respect his elders” and “know where he came from.” Do people need to be reminded that the new millennium is 15 years old? Staples was six during Y2K; why should he worship Biggie and Tupac like everyone else? Arguably, his dismissal of the Rap Canon is what makes him such an idiosyncratic, refreshing presence in the hip-hop community. And maybe that’s where all the hate derives from: Staples didn’t do his homework, studying the past masters with the hopes of someday mirroring their success. By all accounts, he just fell into rapping, and treats it more like a job than a passion. That could be what lends him the objective, scientific eye he uses to dissect modern gangsta rap. Staples’ violent lyrics aren’t fun: they’re stressful, accurate depictions of gang life. Ironically enough, he’s the new Nas. —BS

3. M.C. Schmidt, Batu Malablab: Suite for Prepared Piano, Flute and Electronics (Megaphone/Knock ‘Em Dead). I didn’t actually hear Batu Malablab until November, but Martin held the release show at my house in May, and I spent a lot of time hearing him, Max Eilbacher, and Sam Haberman practice and prepare for a special show that was oversold and impossible to contain. I was working the door, and Martin made me turn away someone who drove from Chicago to Baltimore, while a pack of oogles snuck in behind my back. The audience was piled on top of each other in the main room, and I listened from the other side as Martin and his pals in Horse Lords played a beautiful and beguiling set of music for prepared piano, dog toys, and electronics. What can you say about a record with no words?” —Nicky Smith

4. Helen, The Original Faces (Kranky). If The Original Faces sounds jarring, it’s because we’ve become so accustomed to Liz Harris unadorned, in her Grouper birthday suit: spare instrumentation, stripped down vocals, a re-energized microwave doubling as a narrative climax. Helen, her trio with drummer Jim Bindeman and bassist/guitarist Scott Simons, shuffles very deliberately in a very different direction. This is un-mastered, masticated shoegazing gauze-rock so cloudy and art-damaged that hooks and vocals splinter and refract almost the instant they’re birthed. Anybody claiming to understand what Faces is actually about after a listen or three is a liar; it’s been part of my regular rotation for months now, and I wouldn’t even hazard a guess. All I know is that I’m game for Helen to pulverize me, again and again and again; it’s like tumbling into a dimension where the practice cassettes some dogged yet doomed trio from 1989 play simultaneously, on repeat, for all eternity. Even the basslines slay. —RC

5. Oneohtrix Point Never, Garden of Delete (Warp). Oh, Danny Lopatin—is there anything you can’t do? Garden of Delete is more “interesting” as a concept record than a record that’s actually moving or fun to listen to, but it still beats anything else made by an electronic musician in 2015. Replica and R Plus Seven were both moving and interesting, whereas Garden of Delete is simply punishing most of the time, yet still immensely rewarding as an intellectual exercise. Why rate a record I’m never in the mood to listen to so high? Well, it feels like Lopatin is just getting started, and while some albums and bands might’ve garnered more of my attention, none of them are doing anything as radical or new as Lopatin, and it’s a pleasure to be wrapped around his knuckles once again, even if I’d prefer a prettier path next time around. —NS

6. Bully, Feels Like (Columbia). Speedy Ortiz’s Sadie Dupuis noted that indie rock in 2015 felt like a “Girls Club.” And she’s right: the best records were female-fronted. Dilly Dally called up the whiskey-soaked growl of Shane MacGowan; Diet Cig reconstructed twee-punk through a millennial lens; Downtown Boys brought politics back into punk with their debut, Full Communism. No band was more captivating, though, than Bully. Feels Like, their Steve Albini-approved LP, is a visceral, hook-heavy jolt of pop-grunge. Lead singer Alicia Bognanno—who also wrote and produced the album—howls over the record’s 11 songs, which collectively just pass the 30-minute mark. Bognanno’s voice gets most of the attention, but her lyrics are just as powerful. She conveys the all-consuming weight of anxiety with specific, intimate details that stick in your mind. The album’s centerpiece, “Trying,” collects that anxiety, bottles it, then watches it explode in a volcano of self-doubt and societal expectations. —BS

7. Panda Bear, Panda Bear Vs The Grim Reaper (Domino). Animal Collective’s Merriweather Post Pavilion was the fourth in a string of masterworks that made the band living legends and secured their status as the most important band of the aughts. Since that high in 2009, they’ve been able to spread out and enjoy the fruits of their labor. Panda Bear Meets the Grim Reaper follows four disappointing core and satellite records from the Collective: the debut of Avey Tare’s Slasher Flicks last year, Panda Bear’s Tomboy in 2011, and, from Animal Collective, Centipede Hz in 2012 and the boring visual album ODDSAC in 2010. Noah “Panda Bear” Lennox’s fourth record is his best yet, a culmination of everything he’s explored on his own so far, and it sets the stage for another great era for AC. They don’t have to break up like the Beatles to be the Beatles of their time.

When Lennox followed his future wife to Lisbon, Portugal in 2004, he nearly broke up the band: “Bros,” from Person Pitch, was a bubbly broadside directed towards Josh “Deakin” Dibb, who told his bandmate “bros before hoes.” It’s an incredibly bitter and passive-aggressive lyric buried beneath sunshine-y samples and golden harmonies, but Lennox has always been Eeyore in the barn—a broody Lennon setting his swipes beneath McCartney-esque music. Grim Reaper is a tour de force, a one-man carnival of melancholy from one of the most brilliant songwriters of his generation. I feel privileged to live through their run; Lennox is our Lennon. —NS

8. Power Monster, White Single Female (Signora Ward). The static comes in waves; it drips, craters, gets snarled and snagged, is ripped apart and immediately reconstitutes itself, stronger than ever. Nineteen blindingly hot minutes of self-immolation, White Single Female is a viciously notarized invitation to get real gone, engaging the listener’s undivided attention in a way most releases this year didn’t bother to. The resulting thrill is comparable to watching buildings collapse or campfires burn as clipped voices fight to escape the suffocating velocity of shortwave static; this is the ultimate soundtrack for waking up in the middle of nowhere the uncertain morning following a once-in-a-century snowstorm no one even saw coming. —RC

9. Future, DS2 (Epic). Consider Future’s calendar year, from October 2014 and deep into 2015. Monster—the career-redefining mixtape that transformed the warble rapper from a romantic traditionalist into a hedonistic werewolf—is released three days before Halloween. Beast Mode, the Zaytoven-produced follow-up, starts a single-producer mixtape trend in January. In March, 56 Nights cements Future as 2015’s hottest rapper. July’s DS2 built on the hype of these three mixtapes and delivered down-in-the-gutter, codeine-drenched psych-rap. (What a Time to Be Alive is the stepchild victory lap, an enjoyable—albeit comparatively slight—rehash of Future’s newfound aesthetic, with Drake riding sidecar.) DS2 is the best of these five releases, the most cohesive, singular rap album of 2015. Future feints composure on tracks like “Slave Master” and “Blow a Bag,” but the intonations of ostensibly positive lines like “I’m feeling way better” tell you he’s about to collapse. —BS

10. Chuck Bettis, Pixel Bleed (Living Myth). A long string of live electronic improvisations cut live to hard drive, Pixel Bleed can come across like the 0s and 1s-centered version of a fractally-determined Carl Stallings score. Clicks, pops, snaps, ring signals, and pings impatiently trill, stutter, and loop at its core, as though R2D2, C3PO, and Number 5 put their metal heads together to tackle an unsolvable calculus problem. Every single segue is scrambled, scurrying, or shattered with an urgency that suggests Brooklyn-based Chuck Bettis is rushing to erect an impenetrable firewall just in advance of some imminent malware apocalypse. He’s dipping his chiptune in noise, IDM, and digital minimalism, and that mouthful tastes irresistibly delicious. —RC

Dumbest idea that continues to draw breath: that singles and albums need rollouts and trailers, as though we’re dealing with Jerry Bruckheimer blockbusters or something.

The re-emergence so many (secretly) awaited with baited breath, then shrugged at: Valet.

Most original LP unveiling: Animal Collective streaming Painting With… at BWI Airport over the Thanksgiving holiday.

Greatest Musical Moment of All Time: The Smash Mouth guy freaking out after being pelted with bread.

Best Song That Sounds Like an Outtake from Gaucho by Steely Dan: “These Walls” by Kendrick Lamar.

Best Song I Heard for the First Time After the Singer Died: “Interstate Love Song” by Stone Temple Pilots.

Best Stunt: Animal Collective playing Painting With... on a loop at BWI.