Marilyn Manson is only the latest of my childhood heroes that turned out to be monsters. 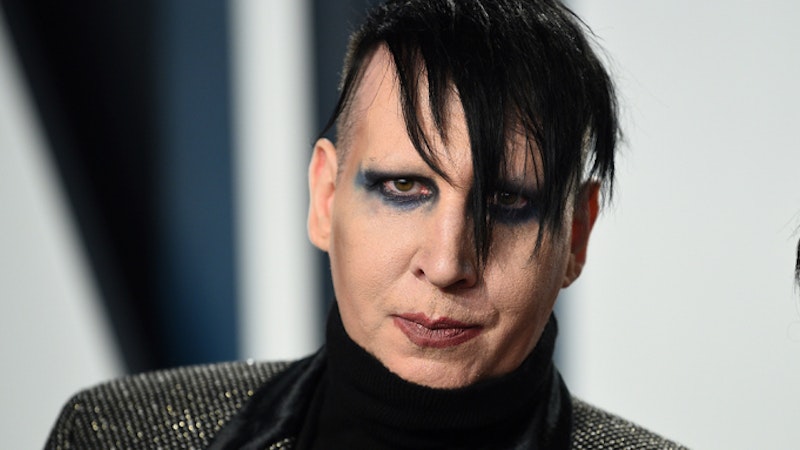 Marilyn Manson is the latest childhood hero revealed to be a monster. There has been speculation on Twitter since 2018 when ex-fiancée Evan Rachel Wood testified before Congress about being in an abusive relationship with an unnamed man when she was 18—the age she began dating Manson—but she finally confirmed it was him last Monday. Manson denies it, but as Jude Ellison Sady Doyle recently wrote, his 1998 autobiography The Long Hard Road Out of Hell is full of anecdotes about abusive behavior towards women, including one incident where he planned to murder an ex-girlfriend.

A lot of my childhood heroes have already been outed as abusers, so the news isn’t that devastating. It’s also not surprising since I remember passages from his book detailing terrible things he and Trent Reznor did to women. (Reznor denies the accusations and claims Manson was lying.) The news about Manson is still disappointing because, like Doyle, he was an instrumental part of my life as a queer trans misfit teenager.

My role in society as the perpetual outsider was solidified by the end of 10th grade. Every day in the hallway, the other kids laughed and gawked at everything about me that deviated from the norm: awkward walk, nasally voice, feminine mannerisms. I didn’t know how to resist the bullies except through screaming and hitting myself in the head, which only gave the bullies more ammunition. The school knew what was going on but didn’t know what to do. During freshman year, the principal told me to sit with a group of 11th grade girls at lunch to have some positive influences in my life. It didn’t work; every time I said being bullied made me want to violently lash out, they quickly changed the subject.

When they all graduated, I was left alone again, feeling rejected by the world. That’s when I realized Manson was right all along. Despite hardly being religious—my family only went to church for weddings and funerals—I hated Manson at first because of the Satanism. (This was before knowing what Satanism is.) After listening though, I found a spokesman for my anger. I was the Antichrist Superstar Manson sang about: a Nietzschean Ubermensch who evolved from a puny worm to a rock ‘n’ roll demagogue desecrating everything sacred, and ultimately ushering in the apocalypse.

When 11th grade began, I dressed in all black, grew my hair out, and drew pictures of Satan in my notebooks. I walked through the hallways with an angry look, wanting everyone to know how much I hated them. When the bullies attacked, I screamed I was going to kill them, which gave me the reputation of being the next Columbine shooter. I loved every second of it.

It wasn’t just the anger that was appealing. Words like “genderqueer” and “nonbinary” didn’t exist back in the 1990s, so those outside the man/woman binary turned to gender-bending rock stars like Manson for inspiration. He gave boys the freedom to paint their nails and put on lipstick. I once tried to wear black lipstick but took it off after being harassed all day. I still remember how comfortable it felt wearing lipstick, though.

Even with the androgyny, there was still an underlying toxic masculinity in both Manson and me. A chapter in The Long Hard Road Out of Hell describes how, while touring with Danzig in 1995, he and his tour bus driver Tony Wiggins would tie women up backstage and torture them until they confessed their darkest secrets. Despite never hurting anyone or planning to do so, I often told classmates I was going to shoot up the school, hoping it would make the bullies go away. It only perpetuated the idea that men must resort to violence to deal with their issues and was probably why the 11th grade girls backed away whenever I talked.

Manson became less important when I converted to Christianity at 17. Jesus was the only thing helping my mental health issues at the time—although years later I realized religion made things worse—so I traded Antichrist Superstar for a Bible and put aside all gender questions until my 30s. I recently started listening to him again, remembering all the good memories accompanying those songs, but now that Manson’s true character has been revealed, I probably won’t anymore. Still, I keep the good parts of Manson with me—nonconformity, gender ambiguity, and thinking for myself—while denouncing the bad.