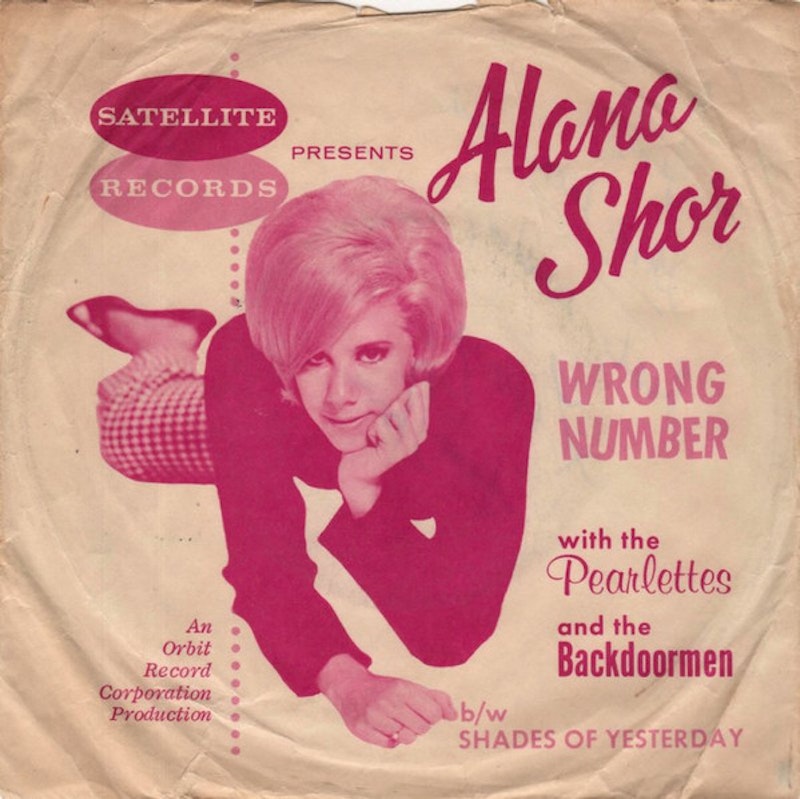 Sometimes the world’s great “lost” works of art are hidden in plain sight. That’s the case for singer Alana Shor’s heartbreaking 1965 anthem “Wrong Number.” Almost completely unknown to even diehard 1960s music collectors, it rarely turns up at auction, stores, or in record dealer catalogues. There are many reasons why this roller coaster ride of teen drama has languished as a forgotten rock ’n’ roll artifact. The story behind the song is nearly as distorted as the recording itself, but the artist who sang on it is anything but obscure within the context of Maryland nightlife circa the late-20th century.

To fans of vintage Baltimore pop, Alana Shor will forever be remembered for her work as the lead vocalist of Paper Cup and Shor Patrol, two bands that were staples of the mid-Atlantic region’s club scene during the 1970s and 80s. She was the voice behind a popular Channel 11 TV ad jingle, and (backed by soul powerhouse The Princetons) recorded a wacky theme song for The Baltimore Bays soccer team. She also frequently collaborated with Jr. Cline & The Recliners and a 1990s line-up of Crack The Sky. “Wrong Number” was her first release. It isn’t as radio-friendly as her better-known music, but it’s one of the best works to come from Shor’s discography.

Sometime in 1965 Shor signed to the Brooklyn, NY indie label Satellite Records. Her family then shuttled her up to the NYC area to record under the guidance of eccentric producer Larry Dismond and songwriter Jerry Millstein (mainly known today as the composer behind the Roulette Records release from psychedelic band First Crow To The Moon). A combo called The Backdoor Men provided instrumental accompaniment (they were most likely named after Howlin’ Wolf’s rough 1961 single “Back Door Man”; it’d be another two years before The Doors released their hit version of the tune) while a mysterious all girl vocal group called The Pearlettes sang mournful harmonies.

Even in 1965—a banner year for all kinds of music innovation—the world wasn’t ready to hear a record as emotionally complex and sonically damaged as “Wrong Number.” Despite the back-up band’s noisy performance, the song’s arrangement maintains the sophisticated feel of a proto-prog rock opus with rhythmic shifts, key changes, and the mercurial entwined vocals of The Pearlettes and Shor. One moment she speak-sings in a hushed whisper, the next her voice unleashes a wailing torch song. Upon its release the record was a flop. A mob of the singer’s friends and relatives called into local radio stations requesting airplay for the ambitious song, but their pleas were in vain.

When the single came out as a 45 rpm 7” it was packaged in a pink/burgundy tinted picture sleeve. Its central image was a photo of the teenaged Shor sporting a semi-formal style similar to that of Leslie Gore, Patty Duke, and other early-1960s fashion icons. She’d yet to adapt the glammed-out flash that’d be her signature during the 1970s and 80s. The record’s connection to New York is also a big reason why it’s remained so elusive. Shor’s base of support has always been strongest in the Baltimore area, and other recording credits attributed to Satellite, Dismond, and Millstein reveal no association with any other Maryland artist. Years later, when unsold stock copies turned up in local record store bargain bins, fans of Maryland music probably thought this was some other random preppy “Alana Shor” from up north and not their flashy heroine from the Paper Cup.

The dynamic intensity of “Wrong Number” could’ve come from any number of sources, but deciphering this element mostly requires a simple understanding of Shor’s character. As detailed in a 2017 Medium article, when the vocalist rose to fame fronting The Paper Cup she found herself performing nearly every night of any given week, often engaging with a wide variety of fans and music pros. Small talk between sets with bandmates and audiences would snowball into deeper subjects:

She felt at her best when she wasn’t performing at all, but helping her band mates and fans. “I was always everyone’s therapist,” she remembers, “People would come up and tell me their problems. And I love it. That’s my hobby, counseling people.” Unfortunately this goodwill didn’t take Shor far in her singing career. “I was pretty determined”, she says, “but I remember telling my manager, ‘I don’t think I had the right fortitude to walk all over people and stab them in the back just to get ahead.’”

A nascent version of this empathic power comes to life in the grooves of “Wrong Number.” Dismond‘s weird production frames the drama with a hybrid of Phil Spector’s “Wall Of Sound” and the reverb rush of instrumental surf rock records all compressed to hell by a low budget tape machine. This is the sonic equivalent of a tear-stained journal entry describing a disastrous breakup. With "Wrong Number" Alana Shor illuminated a mature perspective on emotional drama that few other lo-fi 1960s rock artists could ever confront.