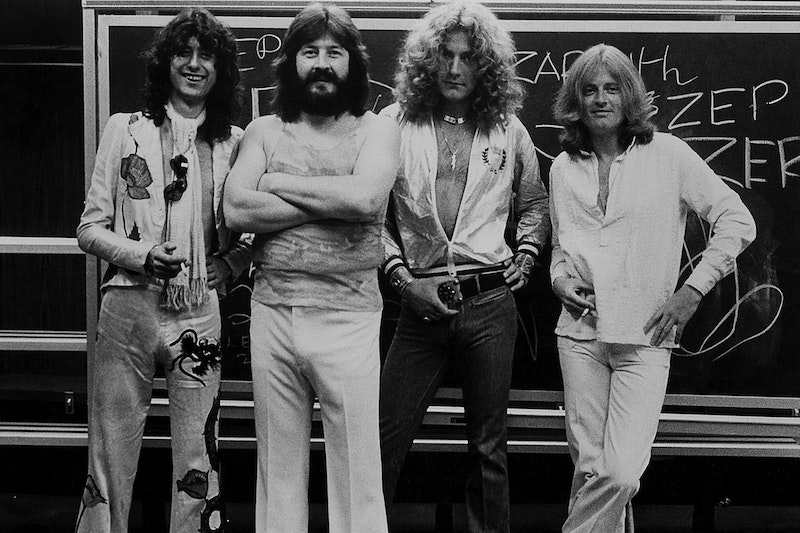 Lenny Bruce had a routine about how this thing was Jewish and that thing was goyish. Ray Charles was Jewish, but Al Jolson was goyish and so were Kool-Aid, Camel cigarettes, and the U.S. Army. In this spirit I’d say the Beatles were Jewish and so were the Stones, and the Kinks definitely, but not Led Zeppelin. Led Zeppelin was goyish. I acknowledge a counter-argument: Of all the greats in classic rock, Led Zeppelin’s one of the few with a self-deprecating name, since it’s based on a joke about being a lead balloon. Plus, the band’s record label was named for the call of a dying bird (Swan Song) and showed a distraught winged-man people keep mistaking for Icarus. That’s a lot of inverted, downward energy and wry loserdom, and it would screw my analysis except I can set against it the most famous thing Robert Plant ever said: “I am a golden god.”

Led Zep was a square, stalwart, simple force that delivered what the regular guy and gal desired by way of rock-and-roll ear drama. Jimmy Page played a guitar with two necks. John Bonham banged lavishly on his drums. Plant stood front and center and shook his locks and flung his voice to heaven. Ingenuity and care went into their record production; Page the maestro didn’t get his effects by accident. Neither does the U.S. Army. But the effects in question are still uncomplicated. The Zep comes at you from no angle. It launches and then it’s atop you, and for the rest you’d better like the sound of warehouse-size drums and hot-hand guitar.

Well, why not? Ice cream sundaes are kind of that way; so are photos of blond 20-year-olds with abs and big smiles. There’s a lot to like and not much to think about, and sometimes it’s nice to see reality specially rigged to dump some mile-wide, dumbass pleasure on a receptor node of the psyche. Good for you, earnest goyish pleasure. On the other hand, a square rock band’s going to look silly pretty soon, and in Led Zeppelin’s case pretty soon was 1969.

When I was young, rock stars had a reputation for being stupid and befuddled; looking back at the era’s great acts, I don’t think the Stones, the Who, Bowie, or the Eagles supplied much fodder for the idea, as opposed to the idea that rock stars were often wanton, destructive, self-involved, jaded, soulless, and spoiled. Stupid and befuddled came from Zeppelin and from memories of the late-stage Beatles, when world media covered the great ones flaming out (Apple, bed-ins, the rest). Not that the Zeppelin team are dummies. Plant rolls out a decent sentence, and Page proved to be that rarest of things, a mastermind. But Zeppelin intact was as fatuous as the Beatles gone bananas and a lot more banal. The filmed fantasy sequences! The white horse on the beach, the questing seeker! All right, Zeppelin’s members weren’t dumb. But you could swear they were. Once Led Zeppelin entered the world, long hair, bare stomachs and Celtic preoccupations all added up to a new way of being routine, and none of the people doing that shit, especially including Led Zeppelin, ever noticed.

Yet there they were at the top of the rock universe. Back in the 1970s, Zep could plausibly be called a bigger act than the Beatles: Tampa sold more tickets than Shea, Led Zeppelin IV had outsold Sgt. Pepper. But the Beatles were less narrow than Zeppelin, who were superb at hitting one particular spot good and hard, the spot hungering for glacier-walls of guitars and the howling of a big-penised man agitated about doom and Vikings and elves. A broader world of feeling and expression lay open to the Beatles, and I like to think that’s why Google says they’ve sold far more records than Led Zeppelin.

Still, Zep does come in number two, with the Stones well behind them. Zep has lasted; they made it and they’re classics. Meanwhile, the group put in decades getting schmecketied by the music press. Greatness or no greatness, Zeppelin has that big broad face and somehow that face is asking for it. Because the Zep, they’re straight. They’re inside, man. They’re simple. They’re Big Macs and WonderBras. They’re mountains and swords, sports trophies and fast cars. With the Tolkien quotes—I mean, good lord, one reels. Rolling Stone tells us that "Ramble On" opens by paraphrasing some Tolkien verse written "in the Elvish tongue of Quenya." I say the Elvish tongue of Quenya is goyish and so is Led Zeppelin.