Soft Dreams in Whitstable and Canterbury

How I missed meeting Hugh Hopper. 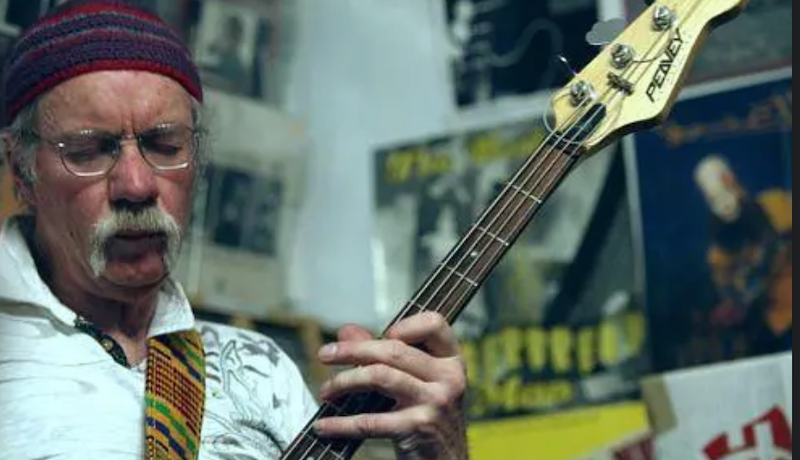 When I was in my late-teens my favorite band was the Soft Machine. They were named after the novel by William Burroughs. At the time they consisted of Mike Ratledge on electric organ, Robert Wyatt on drums, and Hugh Hopper on bass. I saw them at the club in Erdington, Birmingham, called Mothers. They were a kind of psychedelic jazz crossover, with a swirling, fuzz-box organ sound, like Acid Jazz before the genre was invented. They went in for a lot of improvisation, and later were supplemented by a number of actual jazz musicians, such as Elton Dean and Karl Jenkins. The band is still going, but without any of its original members.

They came out of what was known as the Canterbury Scene, a loosely-affiliated musical genre whose only real connection is that some of the musicians had lived in Canterbury at some point, although their careers were mainly forged in London.

In 1968 the Soft Machine were the support band on Jimi Hendrix’ tour of North America. In 1970 they were the first rock band to play the BBC proms. That was the beginning of their ultra-serious phase, and I suspect it had a bad effect on their sense of identity. They became increasingly dull and po-faced. This is marked by the names of their albums: The Soft Machine, Volume Two, Third, Fourth, Fifth, Six and Seven. It’s only after the eighth that their albums acquired actual titles. After a while this began to seem dreary and pretentious to me, even as the music became more singularly jazz-orientated. They were just another free-jazz combo, marked by endless self-indulgent solos of the “look at me, aren’t I clever?” variety. I gave up on them after Third, which remains their most successful album.

Earlier iterations of the band included Daevid Allen, later to form Gong, and Kevin Ayers, a psychedelic crooner who went on to have a successful solo career. I particularly liked Robert Wyatt, who sang in an undisguised English accent, and whose lyrics were marked by a certain wry whimsicality. For instance, on Volume Two, A Concise British Alphabet consists of just that: the alphabet sung to a catchy tune. A later track, A Concise British Alphabet—Pt 2, is the same, but sung backwards.

Robert Wyatt left the band (or was kicked out) in 1971. He went on the form his own group, Matching Mole, a pun on the French translation of their name, “machine mole,” He wanted to sing and the band were moving relentlessly towards a predominantly instrumental format.

In 1973 Wyatt fell from a fourth floor window and lost the use of his legs. The subsequent album, Rock Bottom, is one the best British records of the era: moving, sweetly mournful, yet life-affirming. Wyatt’s voice takes on an ethereal, wounded quality, as if he’s singing to save his soul. The lyrics are simple but poetic, and also marked by poignancy and vulnerability. Here’s a man who has had his heart opened by tragedy but remains committed to the fact of being alive. Sea Song, sung to his wife, the poet Alfreda Benge, is particularly moving.

Wyatt denies any connection between the content of Rock Bottom and his accident. Most of the material was already written, he says, although the time of recuperation in hospital allowed him to imagine the musical parts with a new clarity. "I was just relieved that I could do something from a wheelchair,” he said. "If anything, being a paraplegic helped me with the music because being in hospital left me free to dream, and to really think through the music."

He’s forged a unique musical personality over a number of albums, all of which reveal a quirkiness and originality that marks them out from the mainstream. Cuckooland, his eighth solo album, released in 2003, was a surprise hit, and was given the record of the year award by The Wire magazine. He’s also had a couple of hit singles, notably Shipbuilding, about the Falklands war, which was written for him by Elvis Costello, and a cover of the Monkees’ I’m a Believer, which came out in 1974. He appeared on Britain’s premier pop-music show, Top of the Pops, in his wheelchair, which caused some controversy at the time. The BBC said it wasn’t suitable as Top of the Pops “was a family show.” Wyatt insisted and appeared in his wheelchair, though it might’ve compromised his relationship with the corporation. He was always an awkward customer, known as an outspoken member of the Communist Party of Great Britain. When not recording he wrote letters to his favorite newspaper, the Morning Star.

So that’s it. I lost interest in Soft Machine when they became a free-jazz clone, but remained a fan of Robert Wyatt, who continued to produce interesting and original music from a quirkily left-wing perspective. I also continued to like Gong and Kevin Ayers. What I didn’t know back then, as a schoolboy watching them on the Proms on my TV set in suburban Birmingham, is that one day I’d end up living near Canterbury, where they had first formed, in the little seaside town of Whitstable.

I first visited in the late-1970s. A friend lived in Canterbury. One day we took a bus to Herne Bay and walked along the coastal path from there to Whitstable. It’s about six miles. The first time I saw the town I fell in love with it. I loved the sail sheds along the front. I loved the higgledy-piggledy wooden architecture. I loved the Whitstable Oyster Company building on the seafront, with the steps that went down directly into the sea. Eventually my family and I moved there, in 1984, to a shared house with a group of other adults. I’ve been living in and around the town ever since.

It wasn’t till his death, from leukaemia in 2009, that I discovered that Hugh Hopper, the Soft Machine bass player from the days when I’d loved the band, also lived in Whitstable. So from 1984 till 2009 I had shared the town with one of my heroes and didn’t even know it. How many times might we have passed the street, or been in the same queue in the supermarket? How many times might we have sat in the same pub, sipping a beer while listening to the jukebox, or idly watching a football match on TV?

In fact, he’d gone on to forge his own musical career and was in such bands as Stomu Yamashta's East Wind, Isotope,Gilgamesh, and the Carla Bley Band. There had also been various attempts to revive the Soft Machine brand name, under such variations as Polysoft, Softworks, Soft Bounds and Soft Machine Legacy. He’d become a Buddhist in the meantime and was buried in a Tibetan funeral.

I see this as another missed opportunity in my life, like not going to see William Golding when he was alive. I’d known about Soft Machine’s connection to the town. Robert Wyatt went to the Simon Langton school in Canterbury, and Kevin Ayes had grown up in Herne Bay. There were people I knew who’d known them at the time, when they were all members of the early proto-Soft Machine group, Wilde Flowers. A friend had a copy of a Kevin Ayres book of poetry, called Wilde Flowers, which he let me read. (It wasn’t very good.) I knew that, as Canterbury residents, they’d certainly have come to Whitstable, and it even occurred to me that one or two of them might have stayed here. Whitstable was always much more arty and bohemian than Canterbury, with a strong clandestine edge to it.

There was an attempt to hold a free festival in Broad Oak valley that eventually ended up in Seasalter, on the outskirts of Whitstable, in 1976. Several of my friends attended. It was probably the coolest thing that had ever happened in Kent. I always thought that might’ve had something to do with the proximity of the Canterbury scene. Weren’t these bands the cutting edge of the underground in the 1970s? Wouldn’t the organizers of the festival have known about them? Maybe members of the Soft Machine, or one of the other bands, had suggested Seasalter as a possible location?

This was all speculation, but what I don’t understand is how I didn’t put all this together to come to the realization that one of the members of Soft Machine could easily have remained in the area? Why didn’t any of my friends tell me? Maybe he preferred a quiet life, and didn’t want to advertise his presence. I’m sure that’s true, but it still leaves me with a feeling that I might’ve missed out on something important.