They’ve appropriated and weaponized the American flag as their brand logo icon, equivalent to the rebel flag. 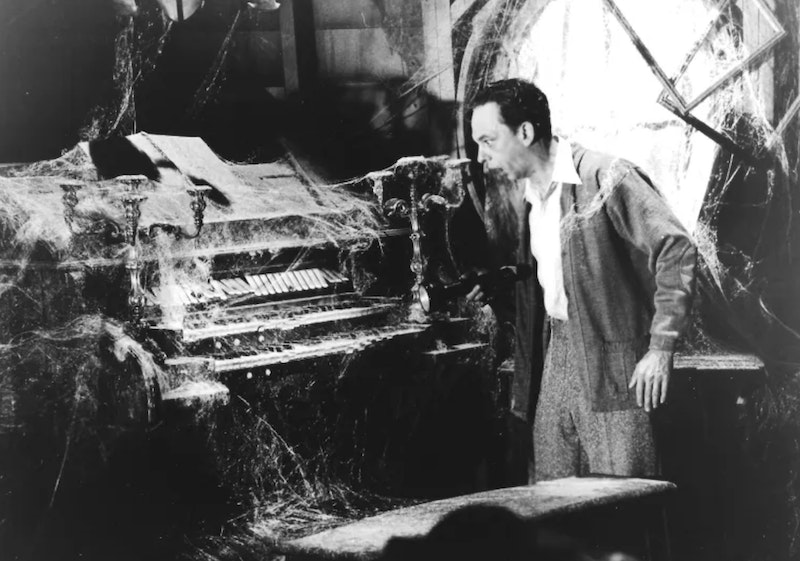 Without uttering a word, missing a beat or turned phrase, music evokes extreme human emotions. The sound of music can bring laughter, joy, and warm fuzzy feelings. Or it can easily produce tears and deliver horror to those faint at hearts. Like 1965’s The Sound of Music, one such movie that covers the gambit of raw emotions, touching all who saw it. An endearing story of struggle centered around the Austrian Von Trapp family who must escape the invading horde of Nazis threatening destruction of their way of life and homeland. Musicals have a way of embedding their songs, like commercial jingles, seared into the memories of all who hear their snappy tunes. Night and Fog doc soundtrack composer, Hanns Eisler borrowed inspiration from monumental classics like Verdi’s Requiem and Beethoven’s 9th symphony. As for Beethoven himself, he was nothing if not a radical composer, a restless musical spirit, finding Mozart’s Requiem, “too wild and terrible.”  Eisler conveyed the terrors of the Holocaust with his unconventional atonal musical score, contradictory yet complimentary to the visual horrors of Nazi Germany. An intimidating reality in the hellscape of the Third Reich’s concentration camps. Similarly, the Nazis used opera and classical symphony orchestra music to pump up the people's patriotic fervor. Composers like Wagner, we’re played extensively in propaganda newsreels, films, parades, and rallies. One such film, Triumph of the Will, fit the bill for a strong, proud Nordic example of artistic inspiration. Making the fascist regime look epic, like the rise of the Roman Empire, or at least sounding proud and noble while instilling fear and hatred. Today's modern Neo—Nazis, listen to Oi boy Skinhead bands, primarily at white supremacist, KKK rallies and other sundry hate group circles. Some presidential politicos prefer, The Village People song YMCA. Laura Branigan’s Gloria, a favorite among those who have no moral compass or common sense. They get all worked up into a semi-conscious religious froth. A volatile comatose cocktail.

There’s an extensive set list of pop music, running the gambit from Aerosmith to Elton John, The Rolling Stones, Neil Young, and Springsteen among others. Left with little recourse to stop illegally hijacked use of their songs, even amid their lawyers objections and requests to cease and desist. Except for Lee Greenwood’s zinger of a song, I’m Proud to be an American. It’s a true showstopper highlight at any white power rally. They’ve also appropriated and weaponized the symbol of the American flag as their brand logo icon, equivalent to the rebel flag, Santa Claus, the Easter Bunny, Jesus, and the swastika. Through audio manipulation plus visually misdirected smoke and mirrors, gullible folks fall for popular sounds, moving to the imitation beats of a charlatan drummer. None of it could remotely be considered macabre, or terrible. It is the mere fact that nefarious groups are misappropriating the music for fraudulent means. Yet there are classical symphonies that've withstood times test and hold true even now.  One random example of the emotional, chilling horrors found in classical music requiems is Mozart’s last requiem. It will make the hair stand on end, send chills down a spine and produce goosebumps on the skin.

The lobby card photo, above, depicts comedic actor Don Knotts in a scene from a 1966 flick, The Ghost, and Mr. Chicken. He’s spooked by a mysterious pipe organ discovered in an abandoned mansion that plays by itself. Everyone believes the organ’s haunted by a ghost. Organs were, and still are, used extensively as background music for horror films, spooky cartoons, and regular Sunday church service fodder. It’s an eerie sound, not extreme like the electronic theremin, often used in Sci FI movies, although close. A thick sound unlike the piano, organs are versatile. The pipe organ was invented and played during the Greek and roman empires. How it became the official instrument for churches Is another story, and perhaps due to its heavenly angelic sound that's also creepy. Like it's a distant cousin to the accordion, or another useless organ like the human appendix. No one knows the whole story. Films like Phantom of the Opera took the organ and ran with it all the way to Broadway. Producing one of the longest running musicals of all time, it's still running today.

The screen adaptation of E. A. Poe’s, Mask of the Red Death, with Vincent Price, portraying Prospero.  It is another fine example of the organ put to good use. What makes Bach’s Toccata in D and Fugue so terrifying? No idea. Dr. Jekyll and Mr. Hyde, Isle of the Dead, and Danse Macabre too. It’s the de facto go to, creepy sound we love and fear. Even Disney’s Fantasia jumped on the bandwagon with that one. Disney even released an album of Chilling, Thrilling Sounds of the Haunted House.

There’s a rich history of Murder Ballads stretching back to Appalachia and beyond. Nick Cave made an entire album of songs based on this genre of murder and mayhem. Mercy Seat and Stagger Lee among them. Like today's gangster rap, someone’s always busting a cap in somebody else’s ass or worse. Murder Ballads are like cautionary tales with a twisted twist. Unknown Hinson has recorded a few. He’s a man of mystery, professing to be a 200 year old vampire with a penchant for “wimmens and likkers.” Yep, it’s a ruse, but he is amusing. Check out his tune in the Trunk of my Cadillac Car. Another golden ballad is Eddie Noacks, Psycho. Let’s just say it’s a tune about his mama. Lightnin’ Wells, Little Sadie, Leadbelly, In The Pines, Johnny Cash, I Hung My Head, Lefty Frizzell, Long Black Veil, Hasil Adkins, She Said/ Eat No More Hot Dogs, Johnny Paycheck, (Pardon Me), I’ve Got Someone to Kill. Even Dylan, weighs in with the Ballad of Hollis Brown. There are plenty more where they came from. Just in time for Halloween. And the band played on. Like skeletons playing their ribs a la xylophones. Some music gets a bad rap for being a negative influence on young, impressionable minds.

Heavy Metal, Death Metal, Devil Metal. Whatever label you give, it was accused of making some teenagers commit suicide. Even bands as innocuous as KISS with their cartoon Kabuki theater get-ups and schlock lyrics. Iron Maiden, with the leather and whip’s shtick, are not immune. Meatloaf and his Bat Out of Hell. Even Ozzy and Black Sabbath. Are they scary? No. Funny? Definitely. No self-respecting deprecating creep could say they never heard Alice Cooper singing, I Love The Dead, or Dead Babies for good measure.