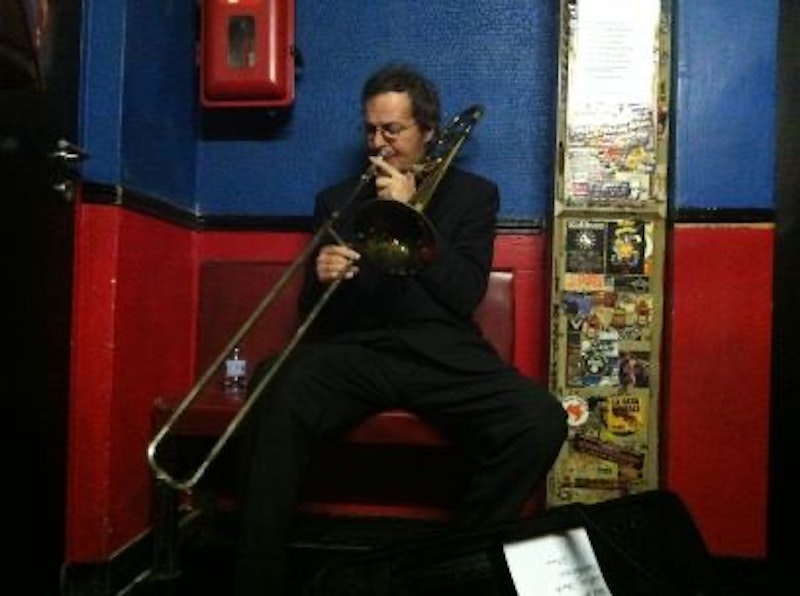 I began playing the trombone at 14 and made fairly fast progress. This isn’t a boast, it’s rather that, if one starts late, and 14 is considered late, progress can arrive quickly. After that it becomes incremental and requires more work. I enjoyed practicing and my parents were supportive, not minding what must have been the excruciating first months of my apprenticeship. But soon I was playing simple recognizable melodies, like a simple version of “The Triumphal March” from Verdi’s Aida or “Go Tell Aunt Rhody.” During my first semester I advanced quickly, so thanks to a teacher, a nice guy and a possessor of Zen-like patience, I started getting scholarships at the Peabody Conservatory Preparatory Department. That was good for my teenaged ego.

After a couple of semesters I joined the brass ensemble. We played a variety of music: the pieces I preferred were by Venetian composer Giovanni Gabrieli. These were antiphonal works that he’d written to be played on the opposing balconies of St. Mark’s Cathedral in Venice. One day I asked the conductor if it’d be okay if I wrote a piece for the ensemble; he said yes, so brought it in the next week. It was a very basic piece written for trumpet, French horn, trombone, and tuba. It lasted around a minute. Hearing my music played I can only compare it to alchemy or magic. For better or worse, I liked it so much that I never stopped writing music. Being in the brass ensemble, by the way, was the first proof of something my teacher had said, that playing an instrument would open doors for me as I went along.

Playing an instrument is a very physical undertaking. This holds true for any performance-based art. Whether a ballet dancer, an opera singer or an instrumentalist, each in his or her own way is an athlete. A virtuoso is worthy of the Olympics. Skilled performance is an image and mirror of the relationship between the body and the mind, how we need the one for the expression of the other, it’s a beautiful unity.

Each instrument breeds its own type. Brass players are a very particular species. The French horn, maybe because it has more twists and turns in its mechanism, is seen as an intellectual instrument. Trumpet players are more like smaller dogs who bark a lot and always want attention. Trombonists are like Golden Retrievers, playful and maybe not that smart. Tuba players are friendly and jovial, like a Saint Bernard.

Despite these alleged differences in temperament, brass instruments playing together produce one of the most beautiful effects in music. Brass, when playing softly, is like watching massive clouds move slowly across the sky. More often, however, it’s their capacity for volume to which composers turn. This is because brass instruments can be very loud. There is a martial element to brass instruments, particularly the trumpet whose origins are military. Who hasn’t seen Herald trumpets announce a jousting match in costumed Medieval epic or John Wayne order a cavalry charge accompanied by a blaring bugle, a cousin of the trumpet? Not to be outdone, a solo trombone playing fortissimo in the mid-register can cut through an entire orchestra. And massed brass is like a tsunami rolling in off the coast, monumental and awe-inspiring. This may have been what led the composer and conductor Richard Strauss to remark, when giving advice to conductors, “Don’t look at the brass section, you’ll only encourage them.”