Sleep: the Science of Living Without Hope

The Sciences is paradox carried to the point of absurdity and revelation. 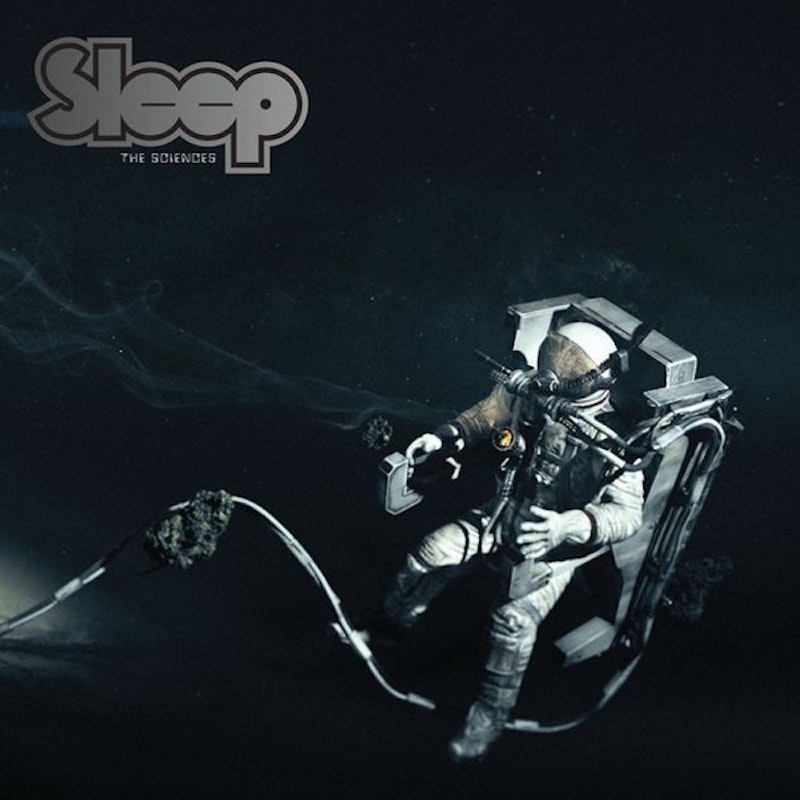 Oh God, I thought to myself. Pitchfork's recommending another metal album as the latest, greatest Best New Album.

I almost skipped it altogether, since I figured I could guess what was coming: guitar solos appearing at random, when the lead guitarist just couldn't wait any longer; loony album-long thematics; and somebody trying to sound intense by howling very hoarsely. If you've ever tried to dig an album by ObZen or late-period Mastodon, you know what I'm talking about.

Instead, what I got was The Sciences, by Sleep, a band that’s quietly incubated for decades, apparently without ever not being high. On their previous album Dopesmoker, which was one 60-minute track long, they sounded like a great idea on paper. It's a decent song, certainly, but it gets a little boring after the first 35 minutes. It feels like there aren't enough riffs, tempo changes or doomy exclamations to keep things lively any longer than that.

Now, 15 years later, Sleep has returned with an album where they've fuzzed out the guitar, set the drummer loose, and whittled down every song to its purest ingredients: a chord, followed by a few others comprising a riff, and back again to the original chord—over, and over, and over.

It's not really a metal album; it’s a psychedelic album. Sleep have taken Black Sabbath's most apocalyptic songs and stretched them, and stripped them, until they intersect with Jimi Hendrix's "Star Spangled Banner," Lou Reed's Metal Machine Music, Nick Cave's early stuff, and other classic experiments in exactly how much meaning sheer noise can deconstruct and/or contain.

I’d say the foundation of these songs is anchored by the drumming, which is perfectly balanced between martial urgency and doom-laden, dramatic flourishes. The rhythm section has muscle and focus to spare, and enough discipline to back off whenever a cloud of noise sweeps in and becomes the song's climax.

Those bursts of noise, and the riffs that keep rising and falling from the depths like something undead, are (you might say) the real vocals in an album punctuated by silly, "prophetic" words that vocalist Al Cisneros intones in a very, very serious baritone. The riffs start out as bits of macho swagger, as anxious visions, or even sometimes as loose and congenial jamming from the 1970s. Whatever their first forms, they all suffer the same fate. They collapse, becoming sonic sludge, in a parody of any coherent structures the listener expects.

Instead of performing this meltdown just once, and falling into that now-familiar postmodern trap, Sleep carries on for 10 minutes per song. The meltdown happens, and then the song re-forms, only to melt down again. This strands us in strange territory; it is a dialectic Slavoj Zizek tries to articulate in his most recent book, The Courage of Hopelessness. He praises his colleague Alenka Zupančič for "deploy[ing] a systematic matrix of the relations between repetition and ending. The basic version is the false reference to the freedom of choice where (if we take the case of smoking) my awareness that I can stop smoking any time I want guarantees that I will never do it."

Zizek then summarizes Zupančič’s theory of Zeno's Conscience, a book about a smoker who eventually realizes that his own efforts to stop smoking are inextricable from his habit of continuing to smoke, with great pleasure, each and every day. As a last resort, Zeno's therapist—hired to help him quit—begins encouraging Zeno to smoke, simply to get his patient over the neurosis of "falsely" quitting. This breakdown of the therapeutic project leads Zeno to his own breaking point: "So, in total despair—not as a great decision—he stops smoking... The way out thus emerges unexpectedly when Zeno accepts the total hopelessness of his predicament."

Zizek brings his point home as a political call to action: "This same matrix should also be applied to the prospect of radical change." In other words, by abandoning all hope, we actually free ourselves to take more radical action than we could have otherwise dared to contemplate. This is not a suicidal leap, either. Abandoning all hope includes abandoning the sentimental refuge of imagining either a peaceful "end to one's sufferings," achieved through suicide, or else an imminent apocalypse that will settle all debts.

Going back to Zizek's opening sentence, about repetition, we see that the normal impetus to repeat an action is the subject’s undimmed hopes: if at first you don't succeed, try, try again. Yet as famous as that maxim is, it’s rapidly losing pride of place to another one: "the definition of insanity is doing the same thing over and over again and expecting different results." (In fact, if you type "the definition" into Google now, the first result is "the definition of insanity.") We are all living through Zeno's paradox, in one form or another, trapped by a series of utopian inspirations that add up to a complete "counterlife," perfectly opposite to the life we endure each day, yet conspiring with it at every instant to keep us wriggling and trapped.

One of the great gifts of music is that it can realize, in emotional phrases and rhythmically accentuated time, the dynamics of a struggle. It can do so without ever coming to a final conclusion or imposing a happy ending. That is what Sleep is doing on this new album, acting out the fundamental drama of hopelessness, repetition, and endings without end. The ironic title, The Sciences, evokes those great traditions of inquiry and progress that seem, in this century, to be putting mankind in all kinds of danger. The various dialectical moments in the life of a stoner—in particular, the phenomenon of feeling radically inspired while one is actually just sitting around in a fog—are writ large here, until they stand for everyone who feels like they live at the crossroads of noble hopes and a lucid despair. This album namechecks the melting ice caps, of course, but it somehow moves us past both laments about global warming and our secret cravings for catastrophe. Sleep manages to juxtapose radical change with radical destruction while keeping both feet on the ground.

On the latest album by The War on Drugs, the lead singer croons, "I resist what I cannot change/and I want to find what can't be found." He sounds weary, like a man who needs his listener to nod with approval. Sleep, on the other hand, are willing to embrace what they cannot change. They want to find out what it is they already have—what it means to be present, bearing witness. They sound jubilantly, absolutely, vitally alive. They have looked over the cliff's edge while hanging on to their "aw, shucks" perspective and sense of humor.

"Look onto Zion, though it can't be seen," Cisneros moans, presumably reading from his own Biblical Book of Al. It's a paradox, and a microcosm of the album, which clocks in at an hour plus of earnest, unsolved paradox. The Sciences is paradox carried to the point of absurdity and revelation. It restores our faith in the substance of things not seen. It's the fastest train to Zion currently running. I'll see you when you get there.