Endgame: When Kanye and Taylor Collaborate

They’ve got some big enemies. 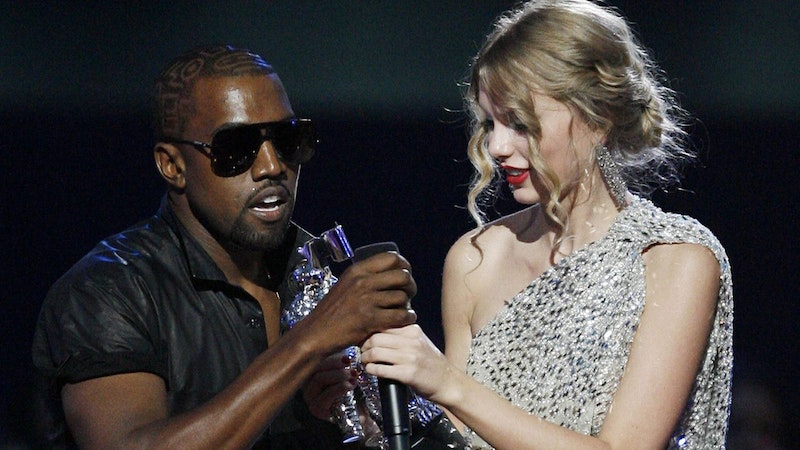 It’s so obviously a genius move it’s a wonder they haven’t contacted each other yet.

Taylor Swift and Kanye West have to perform a song together. When they do, it will herald the arrival of the New Age of boundary-breaking freedom of thought. Tribes will integrate and punitive liberalism will evaporate, like Sauron’s evil spirit blinking out of Mordor. America will officially be great again.

It should’ve happened already. “End Game,” one of the standout tracks from Swift’s beautiful album Reputation, features a rap by insipid and adenoidal balladeer Ed Sheeran. Sheeran chirps his way through some rhymes about how his bad reputation “precedes me” and he’s “got chips on both shoulders.” Justin Bieber sounds like more of a badass.

Can you imagine what Kanye could do with the same opportunity? An idea might be found in his song “Monster”:

Everybody know (I'm a motherfucking monster)

Profit profit, nigga I get it

Everybody know I'm a motherfucking monster

A Swift/Kanye mash-up of Clockers, NWA and Jim Thompson would serve a few different ends. It would give Swift some street behind the intimations of toughness found in songs like “Are You Ready For It?” It would also put to rest the stupid and unfounded rumors that Swift is a white supremacist, a charge that’s purely the creation of imaginative critics who are jealous of the leggy star.

It would also put behind both Taylor and Kanye the ridiculous feud that the two have been carrying out for years.

It started in 2009 when Kanye interrupted an acceptance speech Swift, then 19, was giving at the MTV Music Awards. Kanye later apologized, then took it back, then Taylor referenced him in a few lyrics, and Kanye put a Taylor lookalike in a video and said “I made that bitch famous.” Swift reportedly has a picture of the MTV incident on her mantle. Then there was a disagreement about a song that Kanye wrote that contains lyrics referring to Swift, who allegedly approved the lyrics, but not really.

Enough. I grew up in an era when a professional athlete and celebrity, John Riggins, could get passing-out drunk at a formal dinner and tell the first female Supreme Court Justice, Sandra Day O’Connor, to “loosen up, Sandy baby.” In the 1980s, Melody Maker ran a series called “Boys Keep Swinging” that recounted the blowouts between rock stars—like the time Lou Reed cold-cocked David Bowie. According to NME after Reed’s show at London Hammersmith Odeon and at the Chelsea Rendezvous restaurant, Reed attacked Bowie while the pair were having dinner. “It took nine people to wrestle Reed off Bowie,” Leonie Cooper reports, “while Reed continued to scream insults at his friend. The pair then kissed and made up, but seconds later Reed was seen dragging Bowie across the table by his shirt and hitting him in the face. Reed was then escorted off the premises by his minders.”

Our culture has become so soft that a sarcastic tweet becomes an atomic scandal that envelops media for days, or in the case of Kanye at the MTV Awards, for 10 years.

Instead of colliding, these two musical geniuses need to collaborate. The liberals who’re crucifying Kanye for his political apostasy would be offended, again accusing him of acting white and embracing MAGA America. Taylor’s fans would get a genuine taste of a dangerous an unpredictable creative genius. What a beautiful black and white fantasy.