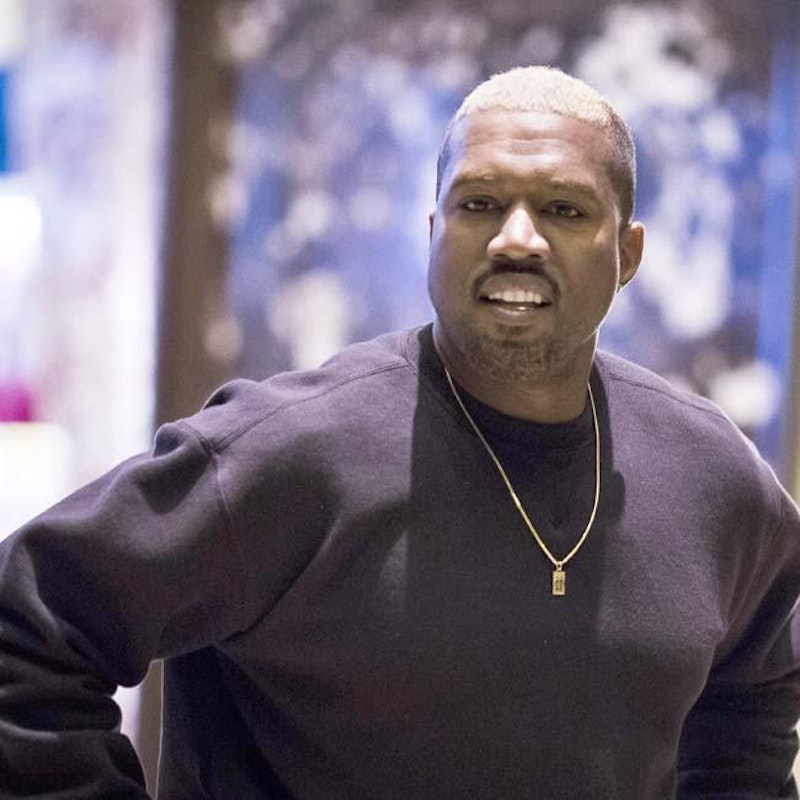 One of the more unexpected pop culture detours has been Kanye West's public embrace of Donald Trump, in addition to some unorthodox views on race. In a recent essay, Ta-Nehisi Coates has suggested that West is trying to free himself of the burdens of race under the guise of "free thought." What's difficult about this kind of argument is that the audience is left to presume that Coates knows West's own mind better than the man himself. Like any public figure, we can only know what West wants us to know.

Trump and West are rich, famous, and notoriously ego-driven non-readers of books. This is as good of a common bond as any, if only because it's so distinctive. An argument could be made that West has only a vague idea of what a book is, having once been quoted as saying, "Sometimes people write novels and they just be so wordy and so self-absorbed. I am not a fan of books. I would never want a book’s autograph. I am a proud non-reader of books. I like to get information from doing stuff like actually talking to people and living real life." It's an especially strange comment when one considers that his mother was an English teacher and his father was a photojournalist.

There's dispute around Trump's reading habits, yet the persistent conclusion is that he's not an avid reader. He's been said to keep the Bible on his nightstand, and that All Quiet on the Western Front is his favorite novel. It's also been suggested that Trump can't make it through a two-page memo without getting distracted.

During the 2016 campaign, Trump said his favorite Bible passage is "Two Corinthians, 3:17," as opposed to "Second Corinthians." His ghostwriters, Tony Schwartz and Charles Leerhsen, have given the impression that Trump trusts those around him to impart information so he can skip the work of reading.

It's a curious irony that two very successful men would so actively eschew the act of reading. People like Bill Gates and Bill Clinton talk about books all the time. Some of West's peers, like Common and Jay-Z, make frequent literary references in their work. I suspect the answer lies not only in the egocentric behavior of Trump and West, but also a mutual lack of humility.

People who read do so for all sorts of reasons, usually to be informed or entertained, or both. Part of that bargain is that the reader will sometimes be challenged or humbled by the work before them. The egotist doesn't want to be challenged or humbled, and doesn't want to discover that he’s under-informed. People like Trump and West want to be worshipped as gods among us, and any reminder that they are human is unforgivable.

West's recent retreats suggests someone whose ego is at odds with the world. In Coates' piece, he relates an incident where the Chicago rapper T.I. came away from a visit with West in dismay. West hadn't heard about Trump's travel ban, and T.I. described the isolation: "He don’t know the things that we know because he’s removed himself from society to a point where it don’t reach him."

Coates frequently uses Michael Jackson as a basis for comparison. He sees parallels in Jackson's plastic surgery rendering the artist unrecognizable to West's embrace of conservatism, as both appear to be a quest toward whiteness. It's a difficult stretch, because on a more personal level, T.I.'s story reminds me of Elvis Presley's last years. In Johnny Cash's memoir, he mentions that Presley, a long-time friend and musical peer, had stopped returning his calls. West's recent revelation that he'd had problems with prescription drug use after undergoing liposuction is reminiscent of Presley's battles with addiction and his weight. In addition, the unexpected deaths of their mothers were devastating blows to both men.

There has been a long tradition of black musicians using their work to speak for the community, and there has been concern that West is abdicating his credibility and authenticity as an artist. Recent releases from Janelle Monáe and Childish Gambino have them using their work to constructively confront the complexities of race, gender, sexuality, and violence, winning praise from fans and critics alike. West's recent single has music lovers pondering his "poopy-di scoop" breakdown, leaving many to wonder if he's gone full troll or is simply out of step.

It's interesting that both Trump and West's situations converge while they're at difficult points in their lives. Trump's administration remains chronically understaffed and is facing multiple investigations. In addition to the poor reception to West's new "single," reactions to early viewings of his fashion line aren't any better. But this is where the similarities end. West's reaction to being spoofed on Saturday Night Live shows that he has some capacity to laugh at himself, where Trump once sued Bill Maher over a joke. That West can laugh at himself gives me some hope that he has some capacity to know when to check his ego at the door. Even so, this non-reader would do well to take some advice from a great American writer.

During his spoken word performances, Henry Rollins has shared the story of falling into an abyss of writer's block. He'd just read the novel Requiem for a Dream, and felt that everything that needed to be said had been said. After about a week and a half of not writing, he was stunned to find the book's author, Hubert Selby, Jr., in the Los Angeles White Pages. Selby became a mentor to Rollins, often giving this advice to young writers: "You men writers, you always put your balls in the way of the story, get your fucking cock out of the way of the story. Just tell the story, get your ego out of the way. You guys, you write, you got too much ego--destroy the ego, tell the truth. The ego is never the truth."